The case for sharing and hope in 2017 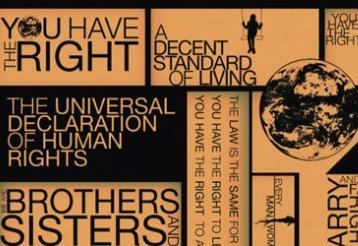 As the world situation continues to deteriorate, there is every hope that 2017 will see a critical new actor emerge on the international stage: a colossal movement of massed goodwill that demands an emergency response from governments to life-threatening poverty and hunger.

For many years now, STWR has made the case for a massive mobilisation of civil society around the issue of life-threatening poverty and hunger. Our basic advocacy position as an organisation could not be simpler: that the urgent need for world rehabilitation must begin with a united people’s voice that speaks on behalf of the least advantaged, giving the highest priority to the prevention of extreme human deprivation in every country. We submit that only through a universal demand for a fairer sharing of global resources can we begin to see a gradual reversal of disastrous current trends, even in terms of regional conflicts and environmental degradation. Yet this will require millions upon millions of ordinary people out on the streets in constant, peaceful demonstrations that are focused on the need for governments to redistribute essential resources to the most marginalised people of the world.

Ending hunger and poverty-related suffering is obviously not enough to shift the world onto a just and sustainable course, but – as we have reiterated in dozens of publications – we cannot underestimate the knock-on effects of this unprecedented show of global solidarity. Simple as the vision is, however, it may appear as if society is moving ever further away from such an appeal to our common humanity and compassion. With the rise of fascist parties in Europe, the recent election of a billionaire demagogue as president of the United States, and a widespread populist reaction against welcoming the growing multitudes of refugees and poor immigrants, what hope do we have of realising a truly global movement of ordinary citizens that is motivated by the acute suffering of others?

There may be high-profile media coverage about the proliferating humanitarian crises in Syria, Yemen, Nigeria and elsewhere, but we still barely hear about the hidden crisis of chronic hunger and malnutrition that afflicts up to 2.5 billion people, and leads to thousands of needless deaths every day. While committed NGOs and UN agencies work ceaselessly to ameliorate the worst effects of this shameless human catastrophe, we can only conclude that the lack of media attention given to its true scale is indicative of the lack of interest, the lack of concern or the sheer complacency of the public at large.

We can advocate for globally redistributive policies for as long as we like, but we will never see a complete turnaround in governmental priorities without this critical new actor on the world stage: a colossal movement of massed goodwill based on a single platform of universally shared concerns. That is why, at the centre of STWR’s proposals, is the call for activists and engaged citizens the world over to uphold Article 25 of the Universal Declaration of Human Rights as their protest slogan, goal and vision in the time ahead. As expounded in our flagship publication, a ceaseless call for implementing Article 25 is the ‘path of least resistance’ towards uniting citizens of both rich and poor societies, thereby impelling governments to redistribute resources and restructure the global economy. It is also the surest path towards reclaiming the United Nations as an organisation that belongs to ‘we the people’, potentially leading to a major democratisation of the UN system if governments are compelled to implement the principle of sharing into world affairs.

Yet there is no hope of realising a consummate vision of universal rights and global equality without another critical factor, one that is seldom acknowledged by progressive political thinkers—namely, the engagement of the heart. STWR’s founder, Mohammed Mesbahi, has written a pioneering series of studies that revolve around this core theme, in which he articulates the need for a new kind of global activism that is no longer oriented ‘against’ the system or any 'ism', but is instead motivated by an inclusive call for economic sharing that can mobilise countless ordinary citizens across diverse continents with a common cause. It is futile to become ‘anti’ any belief or ideology, he argues, such as to go against capitalism; it is time to put capitalism in its right place and redistribute the world’s resources to where they are most needed.

It is also necessary to realise that we cannot make the world a better place, writes Mesbahi, without first looking after the most vulnerable people; and that means demanding from our governments an emergency relief programme to urgently prevent life-threatening conditions of deprivation across the world. Mesbahi makes it clear that a peaceful uprising of the public towards these ends is the very first stage in a process of world reconstruction, and it is the youth who can lead this formidable cause by following the simple instructions that are embedded within his continuing works. Activists in the United States, for example, would do well to heed and broadly disseminate the directives given in ‘Rise Up America, Rise Up!’, where a strategic case is made for reviving the Occupy movement through around-the-clock demonstrations that surround the UN headquarters in New York with a concerted focus on Article 25. Never before have we witnessed vast numbers of people in the streets calling for the abolition of extreme poverty in this manner, as expressed in ceaseless actions of solidarity that invite other nations to follow the same course of action.

However utopian this proposition may sound, it assumes nothing more than redirecting public attention towards immediate human need, which is far from an attempt to satisfy some vague or idealistic theory of world revolution. The only kind of revolution we need in the present context of widespread penury amidst plenty, of declining aid budgets amidst the escalation of human suffering, of economic austerity amidst increasingly concentrated wealth… is a psychological revolution that is defined by the common sense of an engaged heart. That again is the subject that preoccupies Mesbahi’s writings, and we would all do well to ponder what it means for us personally in our everyday lives, especially at this time of celebration and profligate consumerism at Christmas. For what does it mean to celebrate Christmas with love and goodwill when millions of men, women and children in poverty-stricken regions are deprived of the basic necessities of life, let alone the luxury of a Christmas banquet? As Mesbahi writes in ‘Christmas, the system and I’;

“In light of all the suffering and critical problems in the world, what better way to celebrate Christmas this year than to go out in the streets and peacefully demonstrate for an end to poverty and injustice. To say: no more cutting of trees! No more buying extravagant presents! And then to raise our voices for all the world’s people to be fed, cared for and nourished. Wouldn’t that be the best Christmas we have ever known, considering the fact that thousands of people are dying each day from poverty-related causes? Because then we would not only express our loyalty and affection for our own family and friends, but we would also stand in loving unity with the entire world. If Jesus were walking among us today, perhaps that is what He would call on us to do.”

This is the essential message that STWR will continue to spread in 2017 by whatever means we can, through our website and online networks, and in conferences and other fora. As the world situation continues to deteriorate, and as the reactions of love and hate continue to polarise our societies, the responsibility of people of goodwill to uphold the case for sharing has never been greater. Everywhere there is evidence that a new awareness is growing by the day, embracing the necessity of sharing as a last response to our culminating crises. Thus it may not be long until the rich world population finally joins forces with the poor, and together forges an enormous public opinion in favour of sharing the world’s resources.

Article: Studies on the principle of sharing
In this ongoing series of studies by STWR’s founder, Mohammed Sofiane Mesbahi, he investigates the meaning and significance of the principle of sharing...
Article: Uniting the people of the world
Uniting the people of goodwill throughout the world is our last remaining hope for social transformation on a planetary scale. A vast bulk of humanity has...
Article: The cry for justice
As the economic crisis worsens, the foremost responsibility of governments is to redesign our political and economic systems so that no-one dies of hunger...
Report: When will ordinary people rise up?
If world leaders and policymakers are paying merely lip service to the unfolding human and environmental catastrophe, is the growing power of the people's...
Printer-friendly version