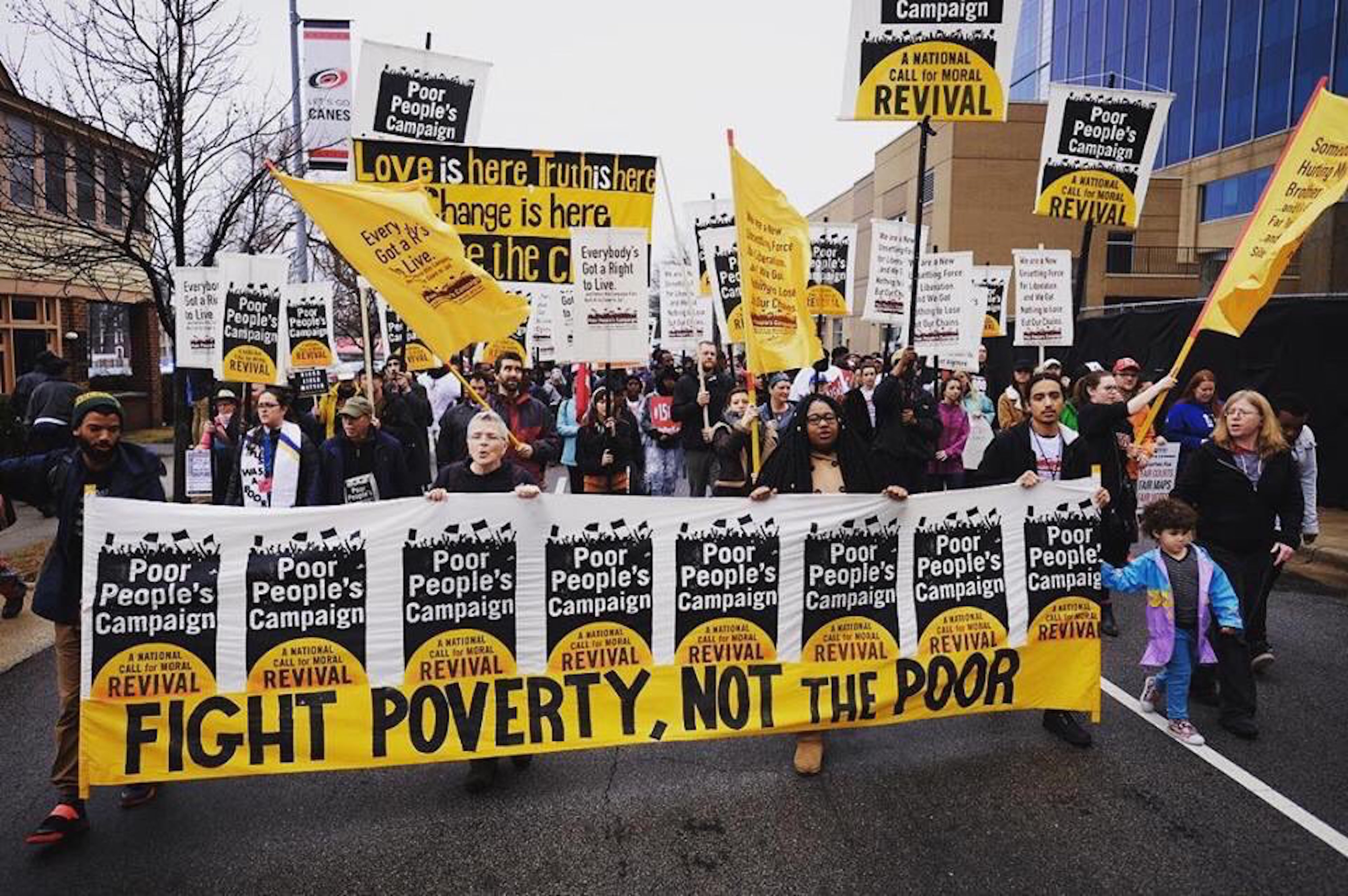 The Rev. Dr. Liz Theoharis, co-chair of the recently launched Poor People’s Campaign: A National Call for Moral Revival, grew up in Milwaukee, Wisconsin, one of three kids in a family she describes as deeply committed to improving life for the excluded and marginalized.

South African Archbishop Desmond Tutu and other peace and anti-apartheid activists were frequent guests in her home, and even as a child, Theoharis understood that religious faith—in her case, Presbyterian—had to be linked to social justice.

This coupling—faith and justice—led Theoharis to work with the National Union of the Homeless as a University of Pennsylvania undergraduate. “Their organizing was inspired by the Poor People’s Campaign led by Dr. King in 1967 and ’68, and I quickly learned the extent of the unfinished business that still needed to be done,” she begins.

By 2001, Theoharis was in New York City, attending Union Theological Seminary and studying “moments in history where poor people crossed racial and geographic lines” to foment change. Her work brought her into contact with scores of activists including the Rev. Dr. William Barber II, whose Moral Mondays protests in North Carolina helped lay the groundwork for the contemporary Poor People’s Campaign.

Theoharis recently spoke to AlterNet reporter Eleanor J. Bader about the campaign and the upcoming 40 Days of Action that will begin on Mother’s Day.

Eleanor J. Bader: What are the specific issues that the Poor People’s Campaign is focusing on?

The second is poverty and includes fair wage campaigns, the need for affordable housing, and access to education and health care.

Third is the war economy, the declared and undeclared wars that the U.S. is waging, and the way economic priorities tilt toward militarism and basically line the pockets of military contractors.

These were the three issues that Dr. King spoke of in the first Poor People’s Campaign, issues that he believed were inextricably connected. But now we’re facing additional concerns. During the 50 years between the first campaign and today, we’ve experienced enormous environmental destruction and climate change, shifts that disproportionately affect the poor. We have to talk about this and look at how fracking, mountaintop coal removal, and the construction of oil and gas pipelines are devastating communities.

Lastly, we’re putting a spotlight on the distorted moral narrative that blames the poor for their problems and presents abortion, gun rights, and gay and trans issues as the main moral issues facing the country.

Right-wing Christians ignore between 2,000 and 2,500 Bible passages that talk about treating the poor with respect and compassion. When Dr. Barber and I speak, people are aware that we’re living in a time of deep moral crisis. They understand that when we challenge the theology of Christian nationalists and other conservatives of faith, we’re on the side of equality for all. It’s our contention that even though people have many viewpoints on abortion and same-gender marriage, if people can just get to know each other and work together, they can learn to fight for justice despite these disagreements.

EJB: Is the campaign working in all 50 states?

LT: No, not yet. Right now, we have 32 state coordinating committees that are up and running, the result of years and years of groundwork. When we first began, we mapped out the poorest communities in the U.S. Our research revealed that the states with the highest overall poverty rates also had the worst voter suppression and the highest number of women and children in need. In addition, states with the lowest number of people with access to health care had the lowest wages, the fewest protections for LGBTQ people, the least environmental protections, and the largest number of military bases.

It became obvious that the powers that be in these states are suppressing the vote, polluting the environment, discriminating against LGBTQ folks, and holding wages down. We believe these facts have the potential of uniting people once they see that their issues are linked.

The 32 committees that are now in place are located throughout the South, and in the Midwest, California, Oregon, Washington, and New England. These states have built fusion coalitions between people of different faiths and races. They’ve been created by local people, are chaired by poor men and women, and include youth, faith leaders, and representatives of the diversity that exists in that particular locale.

Some of the committees also include people from the National Welfare Rights Organization, which is active in California, Louisiana, Massachusetts, Michigan, and Texas; and activists from Fight for 15; farmworker groups; and organizations of the homeless. I want to point out something else: No matter how supportive or friendly they seem, there are no elected officials or candidates for public office on the coordinating committees. We want to avoid this being about Republicans or Democrats. This is a movement led by moral leaders and people impacted by poverty. It is a ground-up effort about right and wrong.

EJB: Can you tell me how you and Rev. Dr. Barber became co-chairs of the Campaign?

LT: Dr. Barber and I have been working together for about five years. We did a Moral Revival Tour a while ago and both of us came to the conclusion that we need a new Poor People’s Campaign. That said, the pairing was very intentional: A man and a woman, a northerner and a southerner, one African American, one white.

Much of my experience comes from lessons learned from doing work to end homelessness. Rev. Dr. Barber’s work comes out of the profound experience of leading the Moral Mondays movement. In addition to weekly gatherings, for 13 years Moral Mondays brought people from all over North Carolina and other parts of the South together for a March that was held on the second Saturday of February. In 2014 and 2017, more than 100,000 people gathered; these were the largest southern Marches in U.S. history. People talked about voting rights, women’s rights, homelessness, LGBTQ issues, militarism, and hospital closures. It was proof that people understood that an injustice to one is an injustice to all.

As a result of our work, both Rev. Dr. Barber and I recognized that when it comes to poverty, systemic racism, and other related issues, it is possible to organize. Furthermore, we saw that poor people are rarely asked to help formulate solutions to the problems they face, and we knew we wanted the campaign to be different. We have a saying that guides us: We need the plight, fight, and insight of poor people, not just to tell their sad stories, but to show the nation that impacted people have the wherewithal to win social justice. We draw on models like the Coalition of Immokalee Workers in Florida, the Homeless Union, and the Vermont Workers’ Center—organizations that show that real change, real transformation, is possible.

EJB: Tell me about the 40 Days of Action that will begin on Mother’s Day, May 13.

LT: We’re planning six weeks of organizing and direct action that will conclude with a big mobilization in Washington, D.C., in late June. Most of the action will take place in the states, however, and we expect to have 25-30 coordinated statehouse actions across the country. People will do what it takes to be heard, including risking arrest. The 40 Days is about launching something. It is not meant as a short-lived, one-time action but is instead intended to start a deep-rooted movement that takes hold in many places at once.

A huge part of the Poor People’s Campaign will involve direct moral action to shift the narrative and get people talking about poverty and the issues that impact poor people’s lives.

EJB: Has the organized religious community been supportive of this?

LT: Yes. In 1968, when Dr. King started the Poor People’s Campaign, not a single religious denomination endorsed it. They feared that the Campaign was too radical, that it would not serve the cause of civil rights to talk about poverty. There was also pushback about uniting low-income people across racial lines. Then, when Dr. King preached against the Vietnam War, he went from being a Nobel Peace Prize winner to being someone unpopular. Nonetheless, he believed that the relationship between racism, militarism, and poverty had to be articulated.

It’s different today. Already, many national denominations have agreed to engage in the Days of Action. This is not just a statement on a piece of paper, but religious leaders from throughout the country have agreed to pray with their feet. We not only have people from Christian and Jewish groups, but Sikhs, Muslims, and indigenous tribes are coming together to participate.

EJB: What do you want the 40 Days of Action to achieve?

LT: We aim to make some legislative breakthroughs, but, more importantly, what we want to do at this stage, the launching stage, is to get people to identify the issues facing poor people and make it impossible for people running for office—or who are in office already—to ignore poverty and the issues that impact poor people. We want to shift the narrative to challenge the theology of Christian nationalists to address the moral crisis of millions of people who are living without homes or clean water, or the millions who are discriminated against. The fact that seven million Americans are right now threatened by cuts to the Home Energy Assistance Program, HEAP, is a moral crisis. There are countless other examples.

Rev. Dr. Barber and I were somewhat surprised by the support we’ve received. We expected to have to convince people about the urgency of these concerns, but people get it. They’re ready to participate in a movement that pulls diverse communities together across race, gender, religion, and geography. The enthusiasm and support for the Campaign has been incredible, especially among people who are not making ends meet and the clergy who see them struggling.

EJB: Are you optimistic that the movement will succeed despite the fact that Donald Trump is in the White House?

LT: I’m feeling really energized! Poor People’s Campaign leaders across the U.S. are heroes and heroines. They’re doing amazing work against all odds. This is a grassroots, from the ground up, movement. Most of the work of the Campaign is being done at the state level, and right now we’re working to build up the power of people to do more than win concessions. We want to ensure that whatever is won is both maintained and expanded. The fact that a massive, moral, direct action movement, led by impacted people and faith leaders, is being created is tremendously exciting.

Eleanor J. Bader teaches English at Kingsborough Community College in Brooklyn, NY and is a freelance writer. Her work appears frequently on Truthout.org, Rewire.news, Theasy.com, and on the Lilith Magazine blog.

Report: Heralding Article 25: A people's strategy for world transformation
After so many years of political inaction only the massed goodwill of ordinary people can bring about an end to poverty in a world of plenty through...
Report: "American Dream is rapidly becoming American Illusion," warns UN rights expert on poverty
The United States, one of the world’s richest nations and the “land of opportunity”, is fast becoming a champion of inequality, according to the United...
Blog: Extreme poverty returns to America
The U.N. finds growing numbers of Americans are living in the most impoverished circumstances. How did we get here? asks Premilla Nadasen.
Article: Rise up America, rise up!
The time has come when America must rapidly transform its values through a more inclusive and spiritual vision, based upon a just sharing of the world’s...
Printer-friendly version