The illegitimate power of multinational corporations 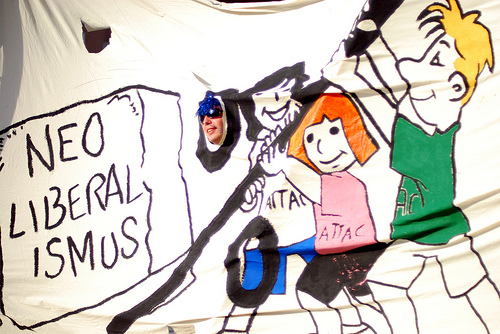 As the influence of multinational corporations over public policy continues unabated, the key challenge for those campaigning for social and environmental justice is how to redistribute political power back into the hands of ordinary people.

Democracy is being subverted by the power and influence of transnational corporations that pursue an ideology of ‘selfishness and cruelty’, and we can no longer afford to ignore the illegitimate authority that these corporate entities exert on society. That’s the core message of the first in a series of articles in the latest State of Power 2014 report, recently published by the Transnational Institute.

Susan George, the author of the report’s first article entitled ‘State of Corporations’, highlights the influence of corporate lobbying activities over policy decisions at the EU and in the US, as well as a $1.3 trillion a year shift in incomes away from European workers and into the pockets of shareholders. Of particular concern is the influence that multinational corporations (MNCs) wield over international trade treaties such as the Transatlantic Trade and Investment Partnership. A key feature of this and similar trade treaties is that they enable MNCs to sue sovereign governments when national legislation potentially harms corporate profitability. To date, more than 560 cases have already been brought forward by MNCs against governments, with a third of corporate claimants demanding at least $100 million or more in compensation.

Ever since Kofi Anan and the head of Nestle inaugurated the UN’s Global Compact, corporate influence at the United Nations has also been disproportionate. At last year’s international climate change negotiations in Poland (COP19), sponsorship of the talks by companies whose profits are largely dependent on the continued use of dirty fuels had reached obscene new heights. George also highlights research demonstrating the concentration of power within the corporate sector. Only 147 companies now control 40 per cent of the economic value of 43,000 corporations, and of the 50 most interconnected companies “48 are banks, hedge funds or other financial services corporations."

It is no coincidence that the rise of ‘illegitimate power’ and its concentration in the hands of a corporate elite has broadly paralleled the growth in levels of inequality, widespread environmental degradation, and the undermining of essential public services across the world. The neoliberal economic model, even though it was discredited during the financial crisis of 2008, remains the dominant paradigm driving policy decisions today - and it remains anathema to any process of economic sharing either within or between nations.

Whereas policies based on sharing distribute wealth and resources fairly, George’s analysis highlights how neoliberal policies are created by the few to benefit an increasingly small elite: the 0.1% who control $46 trillion between them - around 64% of the world’s combined wealth. And whereas economic sharing requires nations and businesses to work sustainably within environmental limits, neoliberal policies allow the natural world to be exploited in order to increase GDP and maximize profits, regardless of the social or ecological consequences.

George’s incisive analysis makes it clear that unless power is shared fairly throughout society – and wielded by people not corporations – it will remain impossible to safeguard the common good or guarantee social and environmental justice. The crucial first step towards reclaiming democratic power is therefore to curb the influence of corporations on policymaking at the local, national and global levels. But given the stark absence of any real opposition to neoliberal ideology amongst politicians, the redistribution of power back into the hands of citizens remains a foremost challenge for anyone seeking a fairer and more sustainable future world.

Article: Moving beyond the corporate vision of sustainability
In light of ongoing global negotiations on pressing environmental issues, it’s time that efforts to curtail the excessive influence of multinational...
Blog: Economic sharing as a challenge to neoliberal globalisation
In the fresh rallying call from civil society for a new future based on sharing, it is interesting to note some old examples of NGO campaigns that call...
Report: Multinational Corporations (MNCs): Beyond The Profit Motive
A report examining the history, structure and motives of multinational corporations and their excessive influence over both governments and the general...
Blog: Sharing and cooperation in the business world
The concept of sharing is fundamental to the business sector, despite the huge challenges to creating an alternative economic model in the midst of a free...
News: The world Is revolting against the US economic and business model: a call to action
The study of business and economics remains largely disconnected from moral, social and spiritual considerations. Alongside leading thinkers from civil...
Article: A new alliance for the global justive movement: Democracy in action
The economic freedom promised through the liberalisation of market forces has, in reality, resulted in a freedom for the very few and a contradiction of...
Printer-friendly version