The importance of equity and finance for more climate ambition 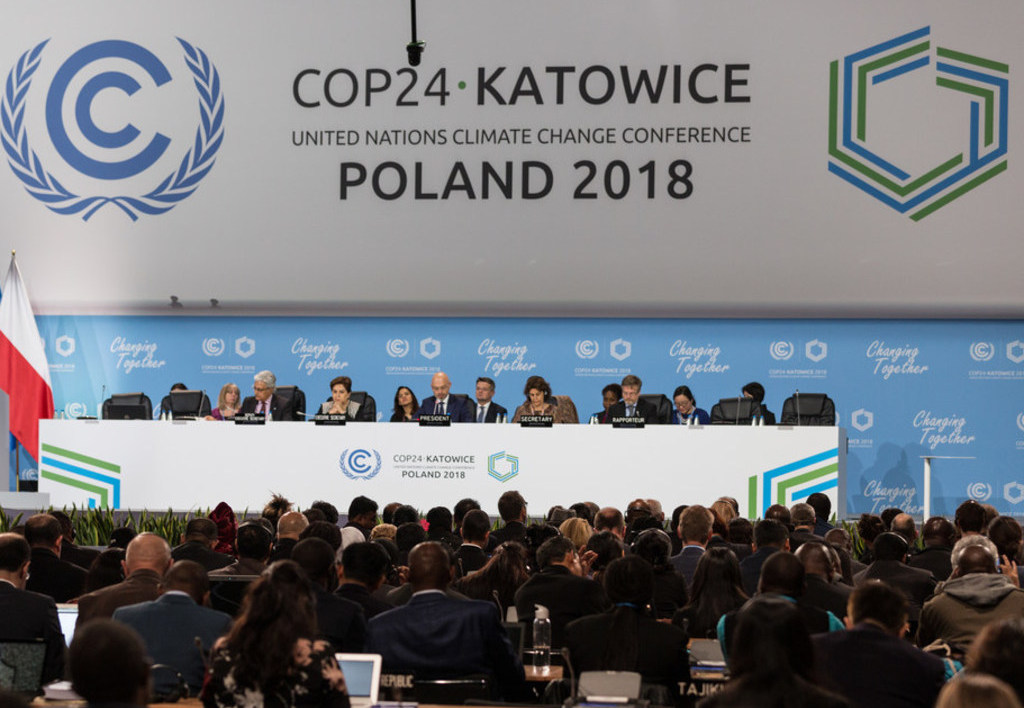 Finance has always been a contentious issue at climate change talks, with developed countries failing to deliver on their commitments. Speakers at a side-event at the annual UN climate talks held in Katowice, Poland, highlighted the linkage between finance and climate ambition, stressing that developing countries will only dare commit themselves to greater emission cuts when they are assured that the monies pledged will come through. By Prerna Bomzan for Third World Resurgence.

'Equity is the gateway to climate ambition,' was the key message reiterated by developing-country negotiators and civil society at a side-event organised by the Third World Network (TWN) and the South Centre on 4 December during the climate talks in Katowice.

The side-event, which had an attendance of around 150, was moderated by Vicente Yu with panel members comprising Zaheer Fakir of South Africa, who is the G77 and China's coordinator on finance issues; Walter Schuldt of Ecuador, who was the preceding Chair of the G77 and China; Ravi Prasad, the Chief Negotiator and Joint Secretary from the Indian Ministry of Environment, Forests and Climate Change; and Meena Raman of Malaysia, who is TWN's Climate Change Programme Coordinator.

Fakir emphasised that it was important to understand the current state of play on finance in the climate negotiations. He gave an elaborate insight into the difference between finance pledges and what actually materialises, citing the example of the Green Climate Fund (GCF), where $10 billion was initially pledged but only about $7 billion has actually materialised, with a $2 billion shortfall due to the United States not meeting its pledge and another $1 billion being lost not merely in foreign exchange fluctuations but also due to the nature of pledges being made in grants, loans, capital and promissory notes.

Fakir added that in the Global Environment Facility (GEF), the allocation of funds for climate change had been reduced by 40%, and this was in an era where enhancing ambition was being talked about. In relation to the financial instruments, Fakir explained that in the past, the multilateral financing was mostly grant-based, while today, it was mostly concessional finance in the form of loans, and this shaped not only the nature and kind of projects but also the type of countries that would be eligible to undertake those projects. He added further that concessional loans, even if the interest rates were low, were still debts and more and more developing countries were being asked to take on debt instruments to implement climate action.

Fakir also pointed out that in the past, all developing countries had access to financing, while now, new eligibility criteria are being adopted unilaterally by some developed countries which are looking at the income levels of countries. Middle-income countries, he said, are viewed as not being eligible for grants but only loans.

Another serious problem that has arisen, said Fakir, is the questioning of projects as to whether they are adaptation projects or development-related. There is also the shifting of the burden to the private sector for providing finance when developed countries clearly have the obligation to do so, he stressed further.

The G77 finance coordinator said that in view of this, when one looks at Article 9.5 of the Paris Agreement (PA) (which provides for ex ante information on public financial resources from developed countries), the issue is really about knowing what finance is available to stimulate developing countries to undertake more ambition on the assumption that money will be received. Reporting of ex ante information on finance is also very important for better planning of actions, said Fakir further.

He added that in essence, the PA did not lead to additional money for developing countries as the decision adopted shifted the goal of mobilising $100 billion by 2020 by another five years to 2025. By 2025, a new long-term goal on finance is expected to be reached but there is no discussion on how that new goal would come about, he said; even the initial $100 billion goal was decided by a few heads of state, with no analysis of the needs of developing countries.

Fakir clarified the difference between the terms 'mobilisation' and 'provision' of finance. He explained that in the GEF, for every $1 provided by developed countries, developing countries have to provide co-financing with a ratio of 7:1, and that for a middle-income country, the ratio is 12:1, which is expected to apply to all developing countries in the future. It is therefore important, said Fakir, to read the fine print in negotiations where developed countries only provide a small portion of the resources while a much larger amount is reported as having been mobilised.

Fakir concluded that in the current negotiations, there has been a reluctance on the part of developed countries to discuss the process of determining the new long-term goal on finance by 2025, or how to guide the replenishment of the GCF, the issue being whether it should be based only on what developed countries can provide or on the needs of developing countries.

Schuldt began his presentation by expressing commitment to the common goal and common vision to address the global threat of climate change and to finalise the work that began in 2015 with the PA, referring to the PA Work Programme which was expected to be adopted in Katowice.

He also called for more ambition in the delivery of finance, emphasising that finance was one of the core elements that had to be finalised in Katowice given both the unfulfilled pre-2020 commitments by developed countries as well as fresh commitments for the implementation of the PA. Schuldt expressed concern that 'new narratives' were coming from developed countries about 'financial flows and the enabling environment' as if it would begin only from 2020 onwards under the PA, despite current unfulfilled commitments in finance to developing countries. He lamented that some developed countries could not agree to a simple decision for the Adaptation Fund (AF) to serve the PA and were pushing proposals to change the existing governance of the Fund so that donor countries could make decisions over how funds could be accessed.

Schuldt also touched upon another key aspect of the negotiations on 'transparency of action' taken by both developed and developing countries, which he said was significantly related to equity. He said that developing countries were already reporting through different tools their climate actions, and that adding more details and complexity to the existing rules of reporting without sufficient finance and capacity building would be burdensome for developing countries.

He also stressed that the final agreement in Katowice should have a clear relationship with local communities and indigenous peoples as well as human rights, but was concerned that there were attempts to sideline them, which was contrary to a just transition as well as the broader concept of climate justice.

Prasad gave an elaboration of how Parties are looking at equity differently. He said that some are articulating equity in terms of the process by saying that adequate participation from developing countries is a manifestation of equity. There are others who are looking at equity in terms of outcomes: if developed countries are sharing greater responsibilities than developing countries, then it is the outcomes and actions which represent an equitable kind of end result in the process. Then there is the aspect of equity in terms of the outcome for individuals in different parts of the world, especially looking at per capita emissions and different consumption patterns. So, equity means different things to different people, and therefore, it is important in this process to talk in the same language and understand the same thing, Prasad said, emphasising equity-oriented outcomes in terms of actions and results for individuals.

The Indian delegate also drew attention to different studies highlighting correlations between energy consumption and growth, and correlations between the human development index and development, emphasising that the focus of countries which are not yet developed is therefore on trying to achieve those goals, which are essential for them to provide basic amenities to their citizens. Hence, whatever climate action or support is being discussed in the UNFCCC process needs to be based on these realities being faced by developing countries, he said.

He added that equitable actions would translate as greater actions by developed countries in terms of both mitigation and the provision of support. On the other hand, when looking at what developing countries are required to do, they have to also address the issues of sustainable development, poverty eradication, provision of energy access, health for all and all limiting factors that they want to overcome. It is in this context that the principle of common but differentiated responsibilities (CBDR) has been anchored in both the Convention and the PA, he emphasised further.

He concluded that all pre-2020 commitments by developed countries must be completed by 2023 by carrying them forward because any pre-2020 gap will be a burden for the rest of the world. He also stressed that the raising of ambition is for the here and now and cannot be delayed for the PA to kick in late in 2021.

Raman said equity was central to climate ambition, recalling its long history from when the Convention was born in 1992 premised upon the fundamental principle of equity and CBDR. Parties have a common responsibility for addressing climate change but how it is to be done needs to be differentiated between the developed and developing countries, given that the former became rich in an unconstrained carbon world, with historical emissions since the industrial revolution and the huge consumption of natural resources since then.

She stressed that the CBDR principle was heavily negotiated in Paris and was finally anchored in Article 2.2 of the PA. However, attempts were being made by developed countries to water it down by changing to a principle of common and shared responsibility, thus diluting the difference between the developed and developing countries. This was unacceptable, she said, since both worlds were not at the same starting point.

Raman said that an ambitious and equitable outcome in Katowice must be premised upon climate justice as defined by CBDR and equity, and expressed deep concern about attempts by developed countries to shift responsibilities to the developing countries, which she said were immoral and unethical.

Prerna Bomzan is a researcher with the Third World Network.

Report: Equity and the ambition ratchet
Share The World's Resources is one of many signatories to the latest Civil Society Equity Review, which proposes a policy framework for a fair sharing of...
Report: The intersection of politics and spirituality in addressing the climate crisis
The following interview with STWR’s founder, Mohammed Sofiane Mesbahi, examines both the contemporary political and profounder spiritual implications of...
Article: The importance of equity and finance for more climate ambition
Finance has always been a contentious issue at climate change talks, but developing countries will only dare commit themselves to greater emission cuts...
Report: A radically realistic climate vision
Limiting global temperatures to 1.5°C above pre-industrial levels is the only way to achieve social justice while protecting our environment from...
Article: Equity + sustainability = sharing globally
At a time when the risk of civilizational collapse is widely forewarned, it is time to recognise that the call for sharing is a cause that can unite...
Printer-friendly version