Introducing a new resolution for a Global Marshall Plan 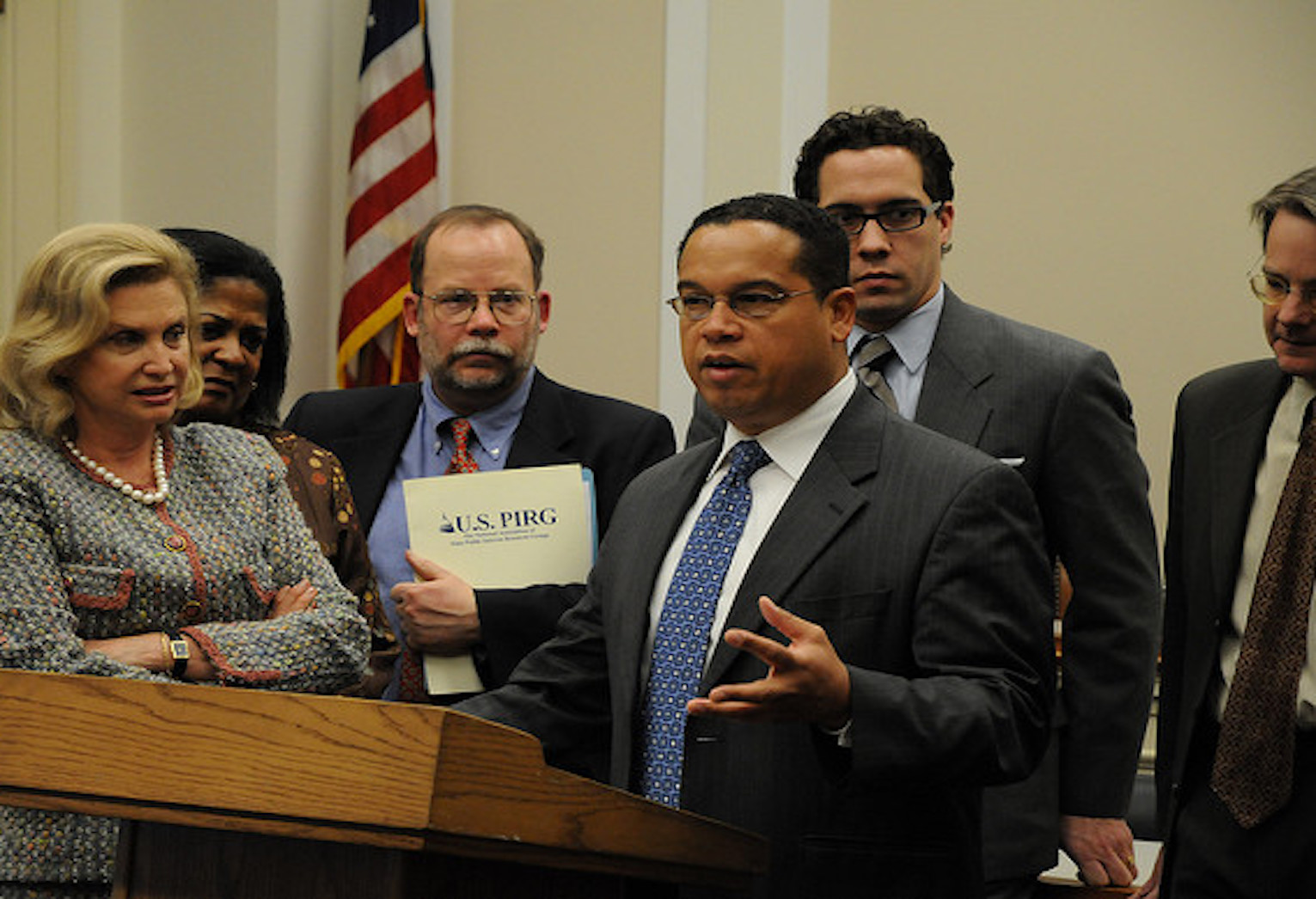 In cooperation with the Network of spiritual Progressives, Congressman Keith Ellison has introduced a new resolution to the House of Representatives for a Global Marshall Plan that holds the potential to promote peace and prosperity through poverty reduction in the United States and abroad. Published by Tikkun magazine, with a forward by Rabbi Michael Lerner.

Tikkun consistently argues that the path to peace is a path of generosity toward others, abandoning the “Strategy of Domination of the World” as the path to homeland security with a very different path–our Strategy of Generosity manifested in  A Global Marshall Plan (see www.tikkun.org/gmp and download the full color brochure describing some of the details).

You can’t get a world without borders unless you simultaneously eliminate the major economic reasons why people seek to enter the US and other Western states–not because of our beautiful “mountains, prairies and oceans white with foam,” but because the normal operations of global capitalism have destroyed their ability to make a living and live in safety where they were born, and because of reactionary forces that grow powerful when people are suffering and in desperate need for emotional as well as economic support.

Please read and then get your local city council and elected representatives to state and federal government to endorse this plan, or to pass resolutions endorsing Congressman Keith Ellison’s H.Res. 87 which he developed in consultation with the Network of spiritual Progressives and reflects some of our thinking. See www.tikkun.org/gmp to get a fuller view of what our plan would entail. If you get enthusiastic about the plan, please join our Network of Spiritual Progressives (NSP) www.spiritualprogressives.org/join , and join us in seeking public support for it–a great conversation opener for discussing the kind of positive vision progressives have for our world.

​Here is the resolution Tikkun’s friend Congressman Keith Ellison introduced Feb. 2017 into the (irredeemably reactionary) House of Representatives, expressing the sense of the House of Representatives that a Global Marshall Plan holds the potential to demonstrate the commitment of the United States to peace and prosperity through poverty reduction in the United States and abroad.

IN THE HOUSE OF REPRESENTATIVES

Mr. Ellison (for himself, Mr. Conyers, and Ms. Moore) submitted the following resolution; which was referred to the Committee on Foreign Affairs

Expressing the sense of the House of Representatives that a Global Marshall Plan holds the potential to demonstrate the commitment of the United States to peace and prosperity through poverty reduction in the United States and abroad.

Whereas after World War II, the United States established a program to provide for the reconstruction of Europe, named after General George C. Marshall and commonly referred to as the “Marshall Plan”;

Whereas by providing assistance to Europe through the Marshall Plan, the United States recognized the direct link between economic growth and political stability;

Whereas in 1948, United States financial support of the Marshall Plan represented a generous 13 percent of the Federal budget;

Whereas the Marshall Plan made possible new measures of international cooperation by promoting European economic integration which has enhanced the security, freedom, and prosperity of the United States and the world;

Whereas the United States established foreign assistance programs, as prescribed by the Foreign Assistance Act of 1961, with a goal of the “encouragement and sustained support of the people of developing countries in their efforts to acquire the knowledge and resources essential to development and to build the economic, political, and social institutions which will improve the quality of their lives”;

Whereas in announcing the Millennium Challenge Account on March 15, 2002, President George W. Bush stated “The advance of development is a central commitment of American foreign policy. As a nation founded on the dignity and value of every life, America’s heart breaks because of the suffering and senseless death we see in our world. We work for prosperity and opportunity because they’re right. It’s the right thing to do.”;

Whereas the World Bank reports that about eleven percent of the world’s population, 767,000,000 people, lives in extreme poverty on less than $1.90 per day;

Whereas the United States has one of the highest levels of poverty among industrialized countries;

Whereas the United States should also work toward improving the life of its own poorest population, as 13.5 percent live below the Federal poverty level;

Whereas the United States joined more than 180 countries in committing to work toward the 17 Sustainable Development Goals to end all forms of poverty, fight inequalities, and tackle climate change by 2030;

Whereas empowering people in the United States and abroad to support themselves will provide a solid foundation for global economic recovery;

Whereas the economic gap between the rich and the poor is even greater today than it was following World War II, when the United States Congress deemed the Marshall Plan essential to the security of the United States;

Whereas reducing poverty may assist in warding off harsh conditions that extremists may exploit to rally support for political violence;

Whereas United States citizens and nongovernmental organizations have proposed a new Global Marshall Plan, including—

(2) revising existing trade and other agreements in which the United States is currently involved so that such agreements favor improving the lives of the poor around the world, and approaching future agreements with like intent; and

(3) providing training to children and adults worldwide in techniques of nonviolent communication, diversity, environmental sustainability, family and parental support, stress reduction, emergency health techniques, diet and exercise, and caring for others who are in need of help; and

Whereas a Global Marshall Plan, embracing a strategy of generosity, would reaffirm the United States commitment to ending global and United States poverty: Now, therefore, be it

Resolved, That it is the sense of the House of Representatives that—

(1) the elimination of poverty and hunger should remain key foreign and domestic policy goals for the United States;

(2) a Global Marshall Plan holds the potential to transform development assistance in a manner that would significantly reduce poverty; and

(3) the President should implement a Global Marshall Plan to increase United States assistance towards the elimination of poverty.

Rabbi Michael Lerner is editor of Tikkun, co-chair with Indian environmental activist Vandana Shiva of the Network of Spiritual Progressives, and rabbi of Beyt Tikkun Synagogue-Without-Walls in San Francisco and Berkeley, California. He is the author of eleven books, including two national bestsellers—The Left Hand of God and Jewish Renewal: A Path to Healing and Transformation. His most recent book, Embracing Israel/Palestine, is available on Kindle from Amazon.com and in hard copy from tikkun.org/eip. He welcomes your responses and invites you to join with him by joining the Network of Spiritual Progressives (membership comes with a subscription to Tikkun magazine). You can contact him at rabbilerner.tikkun@gmail.com.

Article: Implementing Article 25 of the Universal Declaration of Human Rights and a basic income guarantee
The following paper was submitted by Victoria Gater and Sonja Scherndl for a parallel event at the 17th Congress of the Basic Income Earth Network (BIEN...
Report: Heralding Article 25: A people's strategy for world transformation
After so many years of political inaction only the massed goodwill of ordinary people can bring about an end to poverty in a world of plenty through...
Article: Do we care about urban poverty?
While the United Nations recently claimed victory for the Millennium Development Goal on slums, the global population of slum-dwellers continues to grow....
Blog: Fighting Poverty and Austerity through Economic Sharing
Newspapers today are filled with reports of multiple crises, from debt and austerity to regional conflicts, natural disasters and climate change.
Printer-friendly version