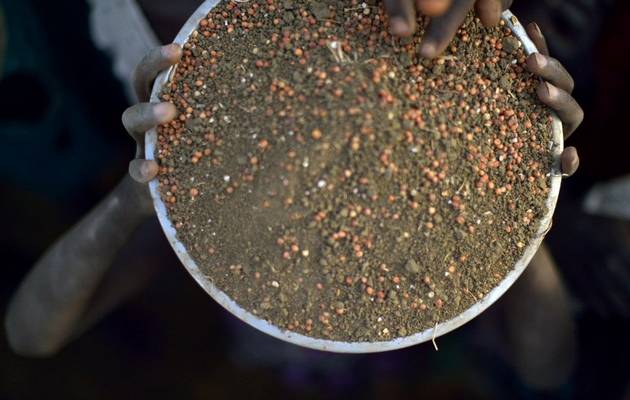 How is it possible that so many people still die from severe malnutrition and lack of access to basic resources in the 21st century? The time has come for a huge resurgence of the spirit that animated Occupy protests from 2011, but now focused on the worsening reality of mass starvation in the midst of plenty.

The world is now facing an unprecedented emergency of hunger and famine, with a record number of people requiring life-saving food and medical assistance in 2017. Since the start of this year, the largest humanitarian crisis since the end of the second world war has continued to unfold, while the international community has failed to take urgent commensurate action. The extent of human suffering is overwhelming: more than 20 million people are on the brink of starvation, including 1.4 million children – a conservative estimate that is rising by the day. Famine has already been declared in parts of South Sudan, and could soon follow in Somalia, north-east Nigeria and Yemen.

In February, the UN launched its biggest ever appeal for humanitarian funding, calling for $4.4 billion by July to avert looming famines in these four conflict-ridden regions. Yet not even $1 billion has been raised so far, leaving little hope that these vital minimum funds will be raised on time. Last week the UN also sought to raise $2.1 billion for the funding shortfall in Yemen alone – described as the single largest hunger crisis in the world, where two thirds of the population are food insecure. But even this appeal remains barely half funded, which will almost certainly leave millions of neglected Yemeni’s facing the prospect of dying from starvation or disease.

How is it possible that so many people still die from severe malnutrition and lack of access to basic resources, in a 21st century world that is wealthier and more technologically advanced than ever before? It was only six years ago that East Africa suffered a devastating drought and food crisis, with over a quarter of a million people dying from famine in Somalia (including 133,000 children), and millions more left with a legacy of chronic poverty, hardship and loss of livelihoods.

In the wake of this appalling human catastrophe, the Charter to End Extreme Hunger was drafted by NGOs from across the world, calling on governments and aid agencies to prevent hunger on such a scale ever happening again. But the underlying principle of the Charter to take early and large-scale preventative action has essentially remained unheeded. Early warning signs for the latest crisis were visible months ago, yet the international community again failed to respond in time to avert an entirely predictable and avoidable famine. So much for the “Grand Bargain” struck at the World Humanitarian Summit last year, which agreed a package of reforms to the complex international emergency system under the empty slogan: ‘One Humanity, Shared Responsibility’.

This fact should be emphasised, as we always have the power to avert and end famines, which are largely man-made and preventable if sufficient resources are redistributed to all people in need. To be sure, the challenge is now historic with increasing “mega-crises” becoming the norm, mostly caused by conflict and civil war rather than natural disasters. Far from stepping up to meet urgent funding appeals, however, donor governments have not even met half of requirements in recent years, leaving many crises and nations pitted against each other for resources. Meanwhile, wealthy nations are recycling old aid pledges as new money, and the purported annual increase in overseas aid is failing to reach the least developed countries. The Trump administration has pledged no new funding to the emergency famine relief appeals this year, instead announcing plans to dramatically cut foreign aid expenditures and voluntary contributions to UN programmes like the World Food Programme (WFP).

The tragic consequences on the ground are inevitable, as demonstrated in Somaliland where the WFP is providing emergency food aid for a few thousand people at a time, when the need is upwards of 300,000. In South Sudan, nearly one out of every two people are in urgent need of food assistance, yet only $423 million has been received out of a requested $1.6bn. Across North-East Nigeria, where 5.1 million people are food insecure out of a population of 5.8 million in the three affected states, the response plan still remains only 20% funded.

Of course, aid alone is not the solution to extreme poverty and hunger. In the long term, the answers for avoiding hunger crises lie within developing countries themselves, including supporting local food production, enhancing community resilience, and guaranteeing social services and protection for the poorest – all measures that rely on effective national governance. Beyond the need for material resources and financial assistance, there is also a need for long-term approaches towards conflict prevention and peace-building, placing the politics of famine at the heart of any international efforts. A huge part of the battle is not only raising vital funds, but also devising the correct response strategy and securing necessary access in complex, fragmented war zones.

At the same time, addressing the root causes of today’s escalating food crises depends on a turnaround in the foreign policy agendas of competing nations, which are either directly or indirectly responsible for many of the wars across the Middle East and Africa that have led to a record high of global forced displacement. The deadly conflict that is ripping apart Yemen continues to be facilitated by the UK and US governments, who are propping up the Saudi-led bombing campaigns through extensive political and military support, including billions of dollars’ worth of weapons sales that dwarf the amounts pledged in aid.

This is clearly the opposite of policies that can make countries like Britain and America “great” again. The world cries out for a new strategy of peace and generosity to replace the self-destructive policies of “national security through domination”, which urgently calls for a modern global Marshall Plan for investment in education, health, water, sanitation, agriculture and infrastructure across the world’s most impoverished regions. Fully-funded aid shipments in place of arms shipments; an end to drone attacks and military “special operations” within countries like Yemen; the spearheading of much needed diplomacy in all war-torn regions; massive transfers of essential resources from North to South – such is the only way to show true political leadership in the face of entrenched global divisions and escalating human suffering.

As STWR has long advocated, an intergovernmental emergency programme to end life-threatening poverty is the very first step towards achieving a more equal and sustainable world. It must be remembered that the four countries grouped together by the UN as a food security emergency are, in fact, only the worst instances of a wider crisis of hunger and impoverishment. Millions of other marginalised citizens are also suffering from soaring food insecurity worldwide, not only across Africa but also Afghanistan, Iraq, Syria, Haiti, the Oceania, and so many other regions. According to the UN’s official statistics, there are more hungry people in the world than the combined populations of North America and the European Union. Every day, around 46,000 people needlessly die as a consequence of life-threatening deprivation, the vast majority in low-income countries.

The reversal of government priorities that is needed to ameliorate this immense crisis may never be achieved, unless world public opinion focuses on the worsening reality of poverty in the midst of plenty. Never before has it been so important for an enormous outpouring of public support in favour of sharing the world’s resources, thus to guarantee the long-agreed socioeconomic rights of every citizen, no matter where they live. Against a backdrop of rising nationalist sentiment, anti-immigrant rhetoric and huge funding gaps for humanitarian causes, it is up to ordinary people of goodwill to stand in solidarity with the world’s suffering poor majority.

The time has come for a huge resurgence of the spirit that animated Occupy protests from 2011, but now concentrated on one simple and unifying cause: for the rapid implementation of Article 25 of the Universal Declaration of Human Rights. Nowhere in the world are these long-agreed rights guaranteed for everyone – concerning adequate food, housing, healthcare, social services and social security for all. But there can be no greater example of the lack of these basic entitlements for a dignified life, than the fact of millions of people dying from hunger across vast neglected and conflict-ridden regions. Hence the need for endless global protests to begin with a united call for wealthy countries to redistribute all necessary resources to those at risk of starving to death, above and beyond the UN’s modest appeals for humanitarian funding.

The situation today is potentially even more catastrophic than in the 1980s, when Bob Geldof and Live Aid were at the forefront of a public funding campaign for victims of the Ethiopian famine – in which almost one million people eventually lost their lives. To stop a repeat of this tragedy occurring on a potentially even greater scale, it will require much more than one-off public donations to national charity appeals. It will also require countless people on the streets worldwide in constant, peaceful demonstrations that call on governments to massively scale up their efforts through the UN and its relevant agencies. Is it not possible to organise a huge show of public empathy and outrage with the plight of more than 100 million people facing acute malnutrition worldwide? For only a grassroots response of this exceptional nature may be enough to awaken the world’s conscience – calling for food and medicines, not bombs; standing for economic sharing as the only way to justice. Surely there can be no greater cause and priority at this critical hour.

Adam Parsons is the editor at Share The World's Resources (STWR).

Report: Heralding Article 25: A people's strategy for world transformation
After so many years of political inaction only the massed goodwill of ordinary people can bring about an end to poverty in a world of plenty through...
Article: An enquiry into the meaning of sharing food
If we are concerned about stopping the enduring crime of starvation amidst plenty, we cannot restrict our actions to the level of our own country or...
Blog: Demanding an end to world hunger
The events of 2011 may well go down in history as constituting the most significant turning point of modern times.
Report: When will ordinary people rise up?
If world leaders and policymakers are paying merely lip service to the unfolding human and environmental catastrophe, is the growing power of the people's...
Article: Rise up America, rise up!
The time has come when America must rapidly transform its values through a more inclusive and spiritual vision, based upon a just sharing of the world’s...
Printer-friendly version