The meaning of the Green New Deal 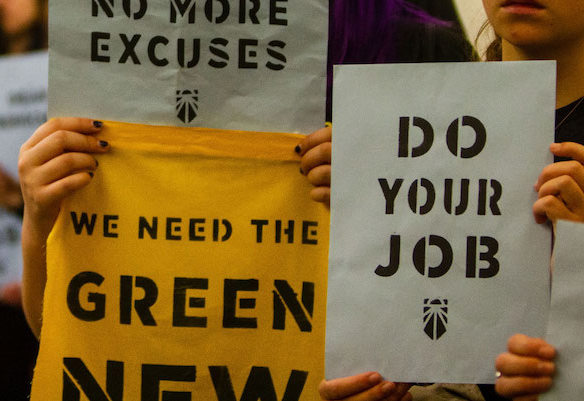 The Green New Deal strongly affirms the need for more equity and social justice, while calling for universal social programs and money transfers to the poorest segments of the population. The fact that these principles are being presented and endorsed by leading politicians suggests a realignment of political forces in the United States, writes Philippe Gauthier at Resilience.org.

Why does the proposal for a Green New Deal spark so much passion in the United States? The 14-page resolution, presented to the US Congress on February 7 by Representative Alexandria Ocasio-Cortez and Senator Ed Markey, proposes sweeping changes to the principles guiding the action of the US federal government. This analysis shows that while the ecological aspects of the proposal are fairly conventional, the political dimension represents a radical departure from 40 years of neoliberal governance.

Before discussing the content of the Green New Deal, and in particular the environmental measures it proposes, it is important to understand the aims of the document, which is primarily a political manifesto. It is inspired by the New Deal, a set of social measures that allowed the United States to overcome the crisis of 1929, and by the industrial planning strategy put in place to win the Second World War.

These principles are not new, but the fact that they are presented and endorsed by leading politicians suggests a realignment of political forces in the United States. Three years ago, Bernie Sanders was considered a marginal figure when defending similar principles. Today, these ideas are at the heart of the American political debate. Conservative politicians realize the challenge and are waging fierce attacks on the Green New Deal.

The proposed environmental measures are relatively conventional and predictable. The mainstream of the environmental movement, and in particular the large green NGOs, will hail them, but a more critical approach will point to their technophilic character and the raise doubts about the simplicity of  the energy transition and the claim that it can be achieved in a very short time. The massive growth of the renewable energy industry is presented as a solution and almost all the proposals carry the proviso “to the extent that it is technologically feasible,” which leaves individual and collective habits off the hook. The key measures are as follows:

They are very wide-ranging:

In its current form, the Green New Deal seems utopian. Like so many similar plans before it, it is meant to bring renewed prosperity, which is to generate the financial resources necessary for its implementation. Although the plan may seem naive at first sight, the conservative elements of the American political class have understood that such a proposal would have been politically out of order just two years ago and that the interest it is attracting indicates that the neoliberal order is rapidly losing its legitimacy. Hence the virulent attacks that have been made against the proposal.

The environmental part of the plan arguably relies heavily on large quantities of green paint. But the prominence of environmental concerns in this political project reveals that ecology and climate score points even in the seemingly hostile America of President Trump. The fate of this manifesto will be interesting to see.

Report: The intersection of politics and spirituality in addressing the climate crisis
The following interview with STWR’s founder, Mohammed Sofiane Mesbahi, examines both the contemporary political and profounder spiritual implications of...
Article: Parliament must declare a climate emergency – not ignore it
To avoid climate catastrophe, we must go beyond what is considered politically possible. A Green New Deal would mobilise resources on a scale...
Report: 10 demands for an energy system based on people power and justice
Friends of the Earth International’s People Power Now manifesto sets out positive measures that will accelerate the transition towards a climate just...
News: Civil society demands action on biodiversity loss
The world is facing a biodiversity crisis, and leaders and delegates of the Convention on Biological Diversity must take real action to halt the...
Printer-friendly version