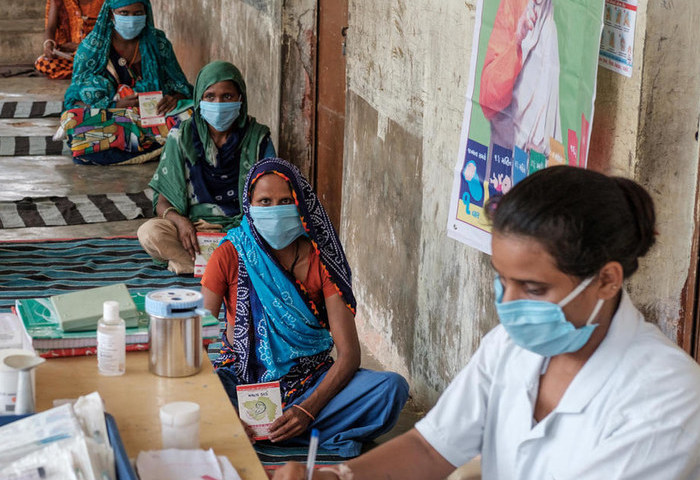 Feeding the world's hungry and helping children in need were enormous tasks even before the pandemic. While the coronavirus has made those groups of people even more vulnerable, impoverished nations are often left at the mercy of wealthy countries for support.

Even before the pandemic, feeding the world's hungry and helping children in need were enormous tasks.

Now the coronavirus made those groups even more vulnerable. Global conflicts have driven millions from their homes, spreading illness and famine in their wake. And impoverished nations are finding themselves at the mercy of wealthy ones, as the world works to find its way out of the pandemic.

Joining me now are two heads of United Nations agencies who dedicate their work to addressing those challenges.

Welcome to you both, and thank you for making the time.

David Beasley, I want to start with you, because, when we last spoke, you were warning that the number of people on the brink of starvation worldwide had risen to 270 million during the pandemic. You were calling on the world's wealthiest, on the billionaires to step up, to show that they care.

What has happened since then? Has it gotten any better or just worse?

Well, it's gotten worse in so many different ways.

And the bad news is the number of people, including children, as Henrietta can so eloquently state.

The number that is rising — on the brink of starvation, has risen from 135 million to 270 million people. And the sad fact is, there's $400 trillion worth of wealth. And just in the past many months, I mean, literally during the pandemic, billionaires made $5.2 billion in increased wealth per day.

And all we are asking for is $5 billion to avert famine around the world. And I don't think that's too much to ask.

Henrietta, you have also been raising warning flags specifically about what children are going through.

The UNICEF issued a report in November of last year about a lost generation of children worldwide. What did you mean by that?

So, we have rising inequality. We have a distressing amount of new families that are falling into poverty.

And because of that, we worry a great deal about children. It is now becoming a child rights crisis. They are missing out on education. They are often going hungry. And it means that many children will be losing out on the futures that we had anticipated as a world.

And if you lose the children, you lose your futures of the world. So, it's something we have to attend to. There are many, many children right now that are suffering. And we can do something about it.

One of the alarming stats from that lost generation report was that — and this is at the end of last year — almost 600 million students were affected across dozens of countrywide school closures. That's the equivalent of 33 percent, one-third, of enrolled students on the planet.

Henrietta, some of those gaps that existed before are getting wider. Can they be closed?

Well, we think they can be.

But you're absolutely right, Amna. This is a part of history we have never seen before, with 1.6 billion children who were out of school during the pandemic. And many schools have not reopened.

And what we have now as a world is enough technologies and enough understanding that we need remote and distance learning that we could do something about it. We have a once-in-a-generation opportunity to connect every school and every learner in the world to education.

And we should do that. We could get this done in the next three to four years. So, we shouldn't have to deal with this as a world. We could overcome it. It's a real opportunity for us.

David Beasley, you mentioned putting that call out to the world's richest and trying to get them to step up.

What will it take? What would it take now, in the coming weeks and months, to meet the need, as it exists right now, before it gets worse?

And so we're not asking the billionaires to step every single year, but this year is truly a hunger pandemic with a COVID pandemic. And if the billionaires will step up, what can happen is that we will avert famine, in other words, mass starvation. We will avert destabilization and mass migration.

And that will cost trillions of dollars, economies will collapse, and people will suffer around the world. So, we're really asking the world's billionaires, please, just this one time, step up and help us. Show the world you care, and let the world know that we truly are in this together and we can get through it together.

And, Henrietta, you and David have both seen this on the front lines. You travel the world all the time, safely as you can, to see it. You were actually in Syria together, I understand, last year.

But there's this crisis that we are all dealing with, which is, of course, the pandemic. And I want to ask you about these plans that UNICEF has outlined to transport potentially 850 tons of COVID-19 vaccines per month on behalf of COVAX. That's the global initiative to ensure vaccine delivery goes to all of those, including those with the greatest need.

That has to be a massive logistical operation.

We have currently two billion vaccines that go through our doors, and this is just for regular childhood immunizations, important immunizations against, let's say, measles, and polio.

But vaccines can save lives. But this is a massive undertaking we are taking as a world. And the COVAX facility is looking after the countries that are low- or lower-middle-income countries. It's very important that this light at the end of the tunnel, as we call the vaccines, it is a light that shines on everyone.

So, we have to be able to allocate them to all countries.

If you don't mind, before you go, I understand you're both here in your capacities as United Nations officials, but I would want to hear briefly from you on this moment of unrest we're experiencing here back home, because you have both served in political leadership here.

So, David, I will start with you.

As you're out on the front lines serving the world's neediest and trying to bring them back from the brink, what's it been like to watch the political violence back here?

Well, Henrietta and I are out on the front lines in destabilized nations and war and conflict all around the world. So, we see a lot of destabilization.

But when you see that on your own home front, it's heartbreaking. And, honestly, I think the people in America need to settle down a little bit. We need to appreciate what we have, because we have got so much to be thankful for.

And what happened last week was not good, nor great. But I'm one of those that believes the sun is rising, and we're going to have a great day and future ahead of us. And people need to come together. And Henrietta and I will do everything we can to make sure that that happens.

Henrietta, what about you? What's been your reaction to the news here?

Well, building on David, one of the things I hope for in the future is that we really use American know-how.

Many of us have come from the business sector and do realize the strength of technology and of people, of ideas, and of the products and services that we have in America. This is the time when they can really be put to use in the world. The world has a crisis before it.

And if there's anyone who is good at that, it's American industry and American know-how. So, if we can pair that with American ideas and ideals with our leadership around the world, it will help everyone. And it means that we can bring a new era of how to look at humanity and how to look at civilization.

Some messages of optimism I think we could all use right now.

Thank you to you both.

News: Covid billionaires should help starving people, says charity boss
Billionaires whose wealth has soared during the coronavirus pandemic should stump up to provide emergency aid to the record numbers of people facing...
Report: 2.7 billion people did not get state aid during pandemic
The COVID-19 pandemic and the lockdown measures to contain it have hit millions of people hard, with poverty set to increase sharply in almost every...
News: Covid-19 vaccines are being hoarded by rich countries - poor ones are missing out
Lost among the jubilation of vaccine rollouts in rich countries is an uncomfortable reality: The world's poorest countries will have to wait months and...
News: Pandemic to fan surge in humanitarian needs in 2021
The UN humanitarian office says needs for assistance have ballooned to unprecedented levels this year because of COVID-19, projecting that a staggering...
Blog: COVID-19 compounding inequalities
The COVID-19 pandemic has highlighted many existing inequalities, and may worsen divergence among countries. While the poor have struggled to survive, the...
Printer-friendly version