Our Future is Public: The Santiago Declaration for Public Services 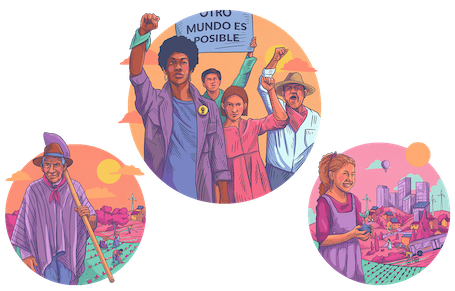 STWR join hundreds of organisations in signing the Santiago Declaration against the commercialisation and privatisation of public services.

From 29th November to 2nd December over a thousand representatives from over one hundred countries, from grassroots movements, advocacy, human rights, and development organisations, feminist movements, trade unions, and other civil society organisations, met in Santiago, Chile, and virtually, to discuss the critical role of public services for our future.

We are at a critical juncture. At a time when the world faces a series of crises, from the environmental emergency to hunger and deepening inequalities, increasing armed conflicts, pandemics, rising extremism, and escalating inflation, a collective response is growing. A large movement is building and concrete solutions are emerging to counter the dominant paradigm of growth, privatisation and commodification.

Hundreds of organisations across socio-economic justice and public services sectors, from education and health services, to care, energy, food, housing, water, transportation and social protection, are coming together to address the harmful effects of commercialising public services, to reclaim democratic public control, and to reimagine a truly equal and human rights oriented economy that works for people and the planet. We demand universal access to quality, gender-transformative and equitable public services as the foundation of a fair and just society.

The common political framing of coloniality helps us to recognise the structures and mindsets that have historically constructed and continue to drive economic inequality, injustice and austerity -  that have left public services chronically under-funded for decades. The neoliberal economy, magnified by the current pattern of hyper-globalisation, is defined by perpetuating extraction, control, dependence, subjugation, patriarchy and the current global division of labour, disproportionately impacting the Global South.

The commercialisation and privatisation of public services and the commodification of all aspects of life have driven growing inequalities and entrenched power disparities, giving prominence to profit and corruption over people’s rights and ecological and social well-being. It adversely affects workers, service users, and communities, with the costs and damages falling disproportionately on those who have historically been exploited.

The devaluation of public service workers’ social status, the worsening of their working conditions, and attacks against their unions are some of the most worrying regressions of our times and a threat to our collective spaces. This is deeply linked with the patriarchal organisation of society, where women as workers and carers are undervalued and absorb social and economic shocks. They are the first to suffer from public sector cuts, losing access to services, and opportunities for decent work, and facing a rising burden of unpaid care work.

Austerity cuts in public sector budgets and wage bills are driven by an ideological mindset entrenched in the International Monetary Fund and many Ministries of Finance that serve the interests of corporations over people, perpetuating dependencies and unsustainable debts. Unfair tax rules, nationally and internationally, enable vast inequalities in the accumulation and concentration of income, wealth and power within and between countries. The financialisation of a wide range of public actions and decisions hands over power to shareholders and undermines democracy.

This gathering in Chile follows years of growing mobilisation around the world. It builds on the organisation of a series of groundbreaking events that brought together thousands of people online, and the adoption in 2021 of the Global Manifesto for Public Services and the related Manifesto on Rebuilding  the Social Organisation of Care.

Our Future is Public

We commit to continue building an intersectional movement for a future that is public. One where our rights are guaranteed, not based on our ability to pay, or on whether a system produces profit, but on whether it enables all of us to live well together in peace and equality: our buen vivir.

A future that is public is one where neither women, nor Indigenous Peoples, nor persons with disabilities, nor the working class or migrants, nor racialised, ethnic or sexual minorities, bear an unfair and unequal burden in our societies. It is a future where the continued legacy of colonialism is broken through meaningful reparations, debt cancellation and a complete overhaul of our global economic system.

Who owns our resources and our services is fundamental. A public future means ensuring that everything essential to dignified lives is out of private control, and under decolonial forms of collective, transparent and democratic control. In some contexts this means decisive local, regional and/or national interventions by the state. In other contexts this means strengthening people’s organisations, including trade unions, and expanding spaces of self-government, commons, collective and community control of resources. We value public-public or public-common partnerships, but we resist the public-private partnerships that only serve to extract resources from the public for private interests.

A future that is public also means creating the conditions for enabling alternative production systems, including the prioritisation of agroecology as an essential component of food sovereignty. To that end we need to take back control of decision making processes and institutions from the current forms of corporate capture to be able to decide for what, for whom and how we provide, manage and collectively own resources and public services.

The public future will not be possible without taking bold collective national action for ambitious, gender-transformative and progressive fiscal and economic reforms, to massively expand financing of universal public services. These reforms must be complemented by major shifts in the international public finance architecture as well as tax, debt and trade governance. We need to seize the momentum generated by the recent successes of African and other Global South countries towards creating a UN intergovernmental framework on tax and the 4th Financing for Development Conference.

Democratising economic governance towards truly multilateral processes is critical to overhaul the power of dominant neoliberal organisations and reorient national and international financial institutions towards socio-economic justice, ecological sustainability, human rights and public services. It is equally essential to enforce the climate and ecological debt of the Global North due to its excess energy and material resource use, and to prioritise finance system change.

A Future that is Public recognises the urgent need for international solidarity and globally systemic but contextually differentiated, solutions. It is an essential element of a just, feminist and decolonial transition, that places public service users and workers at the centre, and will enable us to rebuild a sustainable social pact for the 21st century.

We will take action

We will join forces  across sectors, regions and movements to formulate and carry out common strategies and new alliances towards joint proposals for a just, feminist and decolonial transition in the face of the climate and environmental crises. We will work to  transform our systems, valuing human rights and ecological sustainability over GDP growth and narrowly defined economic gains.

Working in solidarity with grassroots groups everywhere, including Indigenous Peoples, youth, older persons, and persons with disabilities, we will:

Original source and image credit: Our Future is Public

Article: Global manifesto for public services
The COVID-19 pandemic has cast into stark relief the consequences of decades of privatisation and commercialisation of essential public services. Join the...
Report: Reclaiming public services
Reclaiming Public Services is vital reading for anyone interested in the future of local, democratic services like energy, water and health care. This is...
Report: Out of service: How public services and human rights are being threatened by the growing debt crisis
Public services play a critical role in advancing human rights and fighting inequality. But growing levels of external public debt threaten the very...
Article: The power of public finance for the future we want
We need a politics of finance for the 99 percent in which public and democratically accountable finance is used to invest in water, health care and...
Blog: Covid-19 has exposed the catastrophic impact of privatising vital services
Global markets have failed to provide people with basic needs like housing and water, say present and former UN special rapporteurs.
Blog: Reimagining democratic public ownership for the twenty-first century
A new transatlantic project will explore how new models of public ownership can shape the emerging commanding heights of the economy. By Thomas Hanna and...
Printer-friendly version