The power of protest tactics: ‘just do it’ 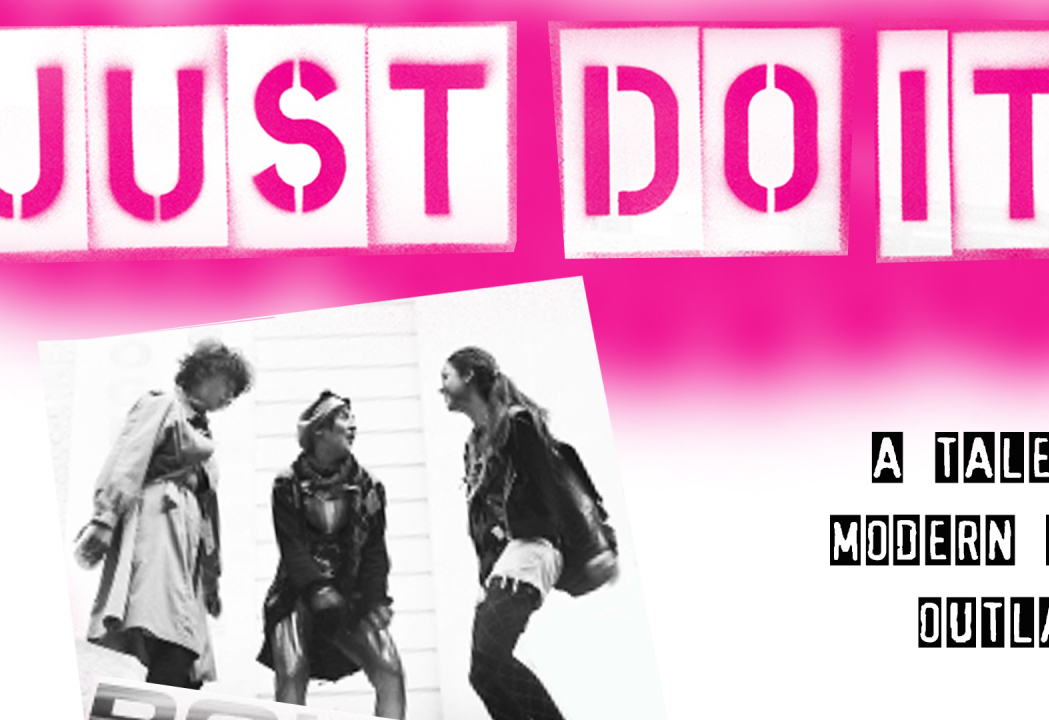 Filmmaker Emily James spent a year documenting the secretive world of environmental direct action, delving into the motivations, creativity and determination of those involved. The result is a film which breaks through tired stereotypes and may just inspire the new wave of protest actions across Europe, writes Adam Parsons.

Non-violent direct action is not the most glamorous occupation in the world. Unpaid overtime, long hours, maligned by a biased mainstream media, widely misunderstood by the middle classes and opposed by a heavy state apparatus, who could be blamed for thinking environmental activism to be a mugs game. But when the audience at a London preview of ‘Just Do It: A Tale of Modern Day Outlaws’ was asked if they had been inspired to take up direct action after watching the film, many hands waved in the air.

The documentary follows the exploits of climate activists in the UK during the run up to the Copenhagen Climate Change Conference in 2009, giving an unprecedented insight into the passion and motives of those who risk arrest in the name of environmental justice. Focusing on six different individuals within the movement, filmmaker Emily James submerged herself in the networks of Climate Camp and Plane Stupid over the period of a year to document their clandestine activities. The result is a roving, humorous and motivating account of the tireless energy that sees mostly young, twenty-something protesters close down banks, prevent airport expansion, and blockade polluting factories.

One of the film’s undoubted stars, Marina Pepper - a charismatic, middle-aged woman from Brighton who always carries a tea pot to demonstrations to provide refreshments for activists and the police - summed up the spirit of civil disobedience from the first opening shots. “I’m a domestic extremist”, she says. Asked what that means, she says: “You would have to ask Special Branch. I’m considered extreme because I’ve gone well beyond recycling and walking my kids to school. I don’t mind putting my body in the way, and I don’t mind being arrested.” Later in the film, Marina is seen with other protestors outside the Vestas factory on the Isle of Wight, attempting to prevent the wind turbine company from closure back in 2009 – until the activists were unceremoniously evicted by police after four months of living in the middle of a roundabout.

Does it do any good?

In one moment, asked by the camera if “all of this does any good?”, Marina struggles for a painfully long time to formulate an answer. “I think you can’t do nothing”, she eventually says. “That wouldn’t have done any good. One of the problems is if people realise there’s a problem and they think they can’t do anything, that’s so depressing, that’s suicidally depressing, that is roll-over-and-die depressing. But if you think you can make a difference, by putting your body in the way, then that’s empowering. So you are actually taking back control of your life, even though all of those decisions are taken by politicians over there. So, yes, it has done good.” In a Q&A with the film’s director after the screening, we were told that Marina had been evicted from a guerrilla garden project in a disused local school (converted into a sustainable allotment to prevent it being demolished for housing) that very morning.

It is a theme that is explored throughout the documentary; does civil disobedience on behalf of a nebulous, intangible goal of saving the planet do any good in the face of formidable corporate and state power? Or are the climate activists who break the law on behalf of a greater good too idealistic, impractical and naive to believe that the world can be changed through the defiance of a relatively few crusading individuals? The film’s answer is made clear in its portrayal of the creativity, street savviness and organisational ability of those who take part in protest stunts and demonstrations.

At the Camp for Climate Action held in South London during the summer of 2009, for example, activists are filmed sitting in a circle as they plan a secretive direct action at a certain unmentionable bank. Batteries are taken out of mobile phones to prevent the watching police, perched on a high rise crane in the corner of the field, from listening in. The next morning, cameras run alongside protesters as they successfully blockade the Royal Bank of Scotland in Central London by locking themselves to the entrance, while other “arrestables” (the term given to those willing to break the law) superglue themselves to the bank’s trading floor. The intention, according to organisers, was to transform RBS into the “Royal Bank of Sustainability” and force it to stop investing in fossil fuel projects – hence the banners unfurled outside that read “RBS: Under New Ownership” and  “Ethical Renovation in Progress”.

Another protest filmed in action was the infamous ‘Great Climate Swoop’ of October 2009. Unlike the more covert missions, the attempted siege of Ratcliffe-on-Soar coal power station was advertised online beforehand and responded to by many hundreds of protestors across the country. Although the plans for a people-led takeover of the plant were foiled by a massive police presence and mass arrests on the day, the success of organising the event through twitter and other websites – as well as the success of generating widespread media coverage, however biased – remains a testament to the kind of non-hierarchical, grassroots organising that has come to define informal protest movements worldwide.

‘I hope I can add something positive’

Against the charges of impracticality or unrealistic expectations that are often levelled against activists, the film is peppered throughout with snappy quotes by the different protestors that shed light on their motivations. Sally, a Cambridge University student who is filmed chaining herself to the home of ex-Business Secretary Peter Mandelson during one suffragette-style protest, says at one point: “Mass civil disobedience is necessary when the law is unjust... the damage [polluting industries] are causing is a billion times worse.” Rowan, another young protester who was filmed closing down a coal power station before getting arrested, says: “Of course it’s futile, but you have to have to hope... you never know if you will win or lose.” Or as another activist simply put it, a campaigner for Plane Stupid who moved house to a noisy village called Sipson that would have been obliterated if a third runway was built at Heathrow airport; “When my life is over, I hope I can add something positive, rather than just take something negative away”.

The documentary culminates at Copenhagen in December 2009 when government ministers gathered for the pivotal UN climate talks. Rather than focusing on NGO pressure groups and negotiations within the conference halls of the summit, the scene of action becomes a legalised squat north of the city where teams of activists have formed the so-called Bike Bloc. The plan, as widely advertised beforehand through the internet, was to utilise the hundreds of abandoned bicycles in Denmark’s capital and transform them into a protest cavalry - a “machine of creative resistance” that could join the thousands of international activists who intended to shut down the UN conference for a day and transform it into a ‘People’s Summit for Climate Justice’.

What happened at the Reclaim Power! action on December 16th is now well known; a colossal Danish police pepper-sprayed crowds outside the conference centre, beat up many of the frontline demonstrators with small clubs, arrested hundreds of people on the street and captured most of the Bike Bloc protesters before they even set off. But the film’s footage manages to capture the spirit of resilience and self-belief that characterised the activist groups in Copenhagen, despite the failure of world leaders to produce any binding commitment to tackle climate change. One protestor describes the atmosphere inside the cages where hundreds of protestors were interned for the day; it was like an international collaboration, he says, in which everyone sang each others’ chants of solidarity and defiance in different languages against the authoritarian policing.

By the end of the film, you could say that ‘Just Do It’ has a fairly clear political message. As the film’s director herself admitted; “There was interest [from broadcasters] if I was going to be cynical about the subject matter. But these people are heroes. Yes, it’s a sympathetic portrait. But everything I make is propaganda, so fuck it.” Before the credits roll at the end, you are reminded that the UK energy company E.ON cancelled plans to build a new coal-fired power station at Kingsnorth; plans for a third runway at Heathrow Airport were scrapped by the government; and Danish courts eventually ruled that the detention of nearly 2,000 protesters during the UN climate summit was illegal. Protest tactics work, is the implication. Or in Marina’s final words: “There’s more to life than what you shop”.

To stream the move visit: https://streamingmoviesright.com/us/movie/just-do-it-a-tale-of-modern-day-outlaws/

For information on the film please visit: Streaming Movies Right

Report: When will ordinary people rise up?
If world leaders and policymakers are paying merely lip service to the unfolding human and environmental catastrophe, is the growing power of the people's...
Article: Talkin’ ‘bout a global revolution
As the global financial crisis now enters its seventh year, it is time to start asking difficult questions about the right priorities for popular protest...
Blog: The failure of Rio+20 is a wake-up call for people power
Following the ‘hoax summit' and failure of political leadership at Rio+20, it is clear that the responsibility for change rests with ordinary, engaged...
Printer-friendly version