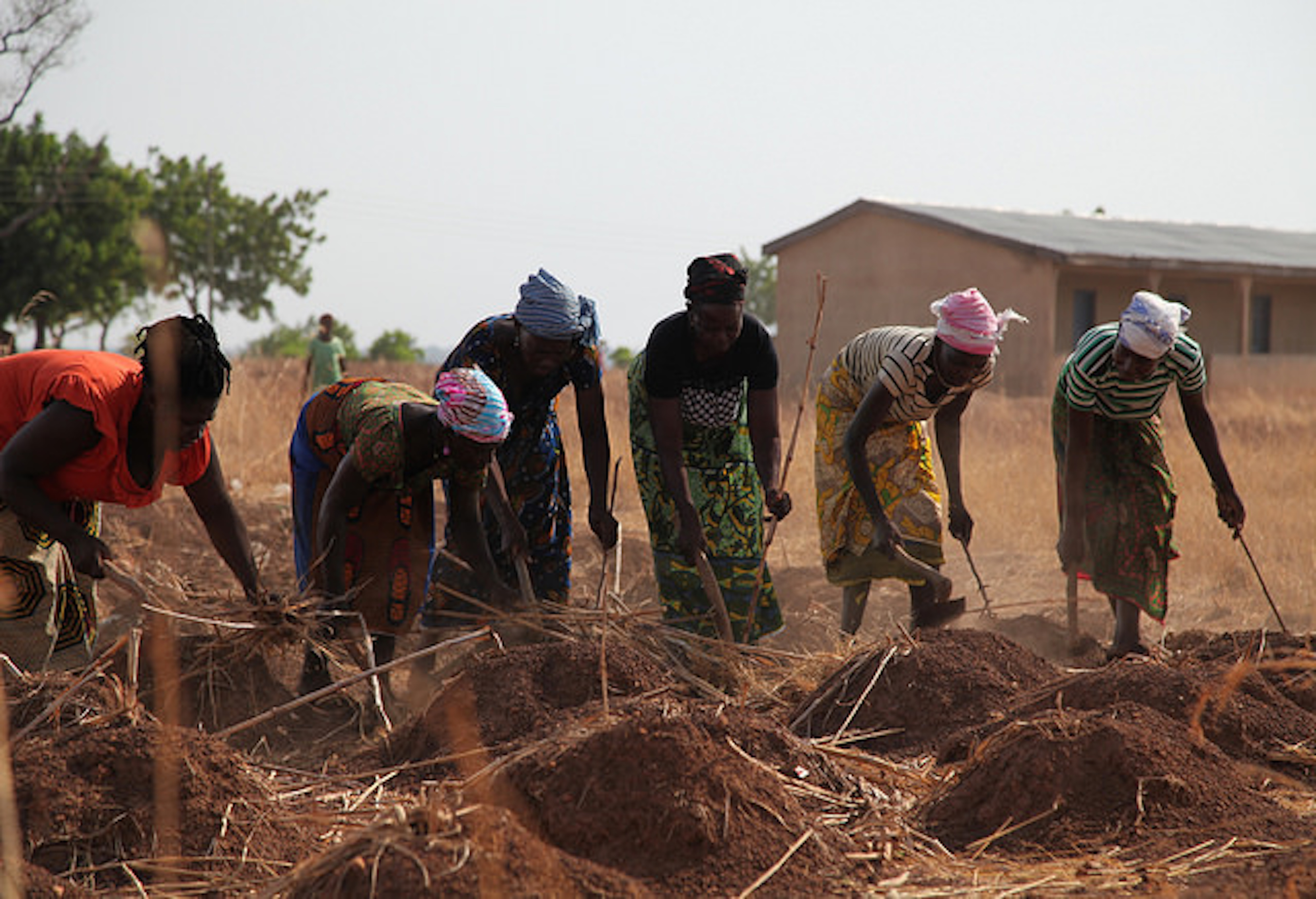 The expansion of corporate control in agriculture is reflected in three international treaties that establish the global rights of various stakeholders to seeds, germplasm, and plant varieties. But the balance of power needs to tilt back the other way, with farmers’ rights taking precedence over agribusiness profits, whether in these treaties or in trade deals, explains Karen Hansen-Kuhn.

The consolidation of corporate power in agriculture has been in the news a lot lately, first with the proposed ChemChina-Syngenta and Dow-DuPont mergers, and now with Bayer’s proposal to purchase seed giant Monsanto. National Farmers Union president Roger Johnson testified in Congress last week that the proposed mergers would enable just three corporations to control 80 percent of the U.S. seed supply (and 70 percent of the global pesticide market). The result is that farmers have fewer and fewer choices about the kinds of seeds they want to plant. The concentration of processing and distribution also limits options and further squeezes farmers at a time when prices are tumbling around the globe.

This expansion of corporate control is also happening in three international treaties that establish the global rights of various stakeholders to seeds, germplasm, and plant varieties. Each of these treaties strikes a certain balance among those interests. And recently, like the agribusiness mergers, the balance has been tilting away from the interests of smaller-scale farmers and diversified agriculture. Unsurprisingly, corporations interested in accessing seeds and other genetic resources are pushing hard on all fronts.

This is most evident in the push to compel countries to adhere to the most corporate-friendly of the three: the International Union for the Protection of New Varieties of Plants (UPOV). Although earlier versions of the treaty included some flexibility for family farmers to save and share seeds, the 1991 version eliminated those rights. According to analysis by Public Citizen and Third World Network (TWN), UPOV91 requires protection to be provided for all plant varieties for 20 to 25 years, and it stops farmers and breeders from exchanging protected seeds—a traditional practice common among farmers in many countries around the world.

The Trans Pacific Partnership (TPP) includes provisions requiring countries in the trade deal to ratify UPOV91. Of the TPP countries, Brunei, Chile, Malaysia, Mexico and New Zealand are not yet members of the UPOV91. Those countries would be pushed to make major changes to domestic laws and rules that protect farmers’ rights when it comes to plant breeding and seed saving. Any other countries that join the TPP would also be compelled to become members of UPOV91. Countries currently considering joining the TPP include South Korea, Indonesia, the Philippines, and Taiwan—none of which is a member of UPOV91. That process is already generating considerable controversy in TPP countries, as well as countries involved in prior trade agreements like the U.S. Central America Free Trade Agreement [see this blog by Ben Lilliston for more on UPOV91 and the TPP].

The United Nations Convention on Biodiversity (CBD) struck a different balance in its Nagoya Protocol, which was completed in 2010 and entered into force in October 2014. It has been ratified by 86 countries (but not the United States). It establishes a consultation process for prior and informed consent over decisions to share seeds and other genetic resources, as well as a process for benefit sharing. It’s a step forward in terms of ensuring developing country interests, but still generates controversy.

Adelita San Vicente—from the Mexican NGO Semillas de Vida (Seeds of Life) and the Without Corn No Country campaign (which has so far successfully sued to block planting of GMO corn in Mexico)—explains that the Nagoya Protocol, while an improvement over UPOV91, fails to consider the context of the seeds, reducing them to commodities rather than essential elements of people’s cultural heritage. In June, a provisional Constitutional Court ruling suspended the Protocol’s implementation in Guatemala, in large part as a result of campaigns by indigenous and farm organizations led by the Red Nacional para la Defensa de la Soberania Alimentaria en Guatemala (National Network for the Defense of Food Sovereignty in Guatemala). They argued that the goal should be to protect biodiversity, not to commercialize it.

Companies eager to access genetic resources in other countries are finding the Nagoya Protocol too difficult to navigate, so some are turning to a third body, one actually seen as a model for protecting farmers’ rights. The International Treaty on Plant Genetic Resources for Food and Agriculture (ITPGRFA, also known as FAO Seed Treaty) was completed in 2001. The Seed Treaty governs access to seeds and germplasm included in its seedbank and establishes rules on fair and equitable sharing of the benefits.

When the treaty was completed, many organizations including IATP praised the FAO Seed Treaty as “a major step forward for farmers around the world by improving their access to seeds.” The most contentious provision states that farmers, researchers and others using the system “shall not claim any intellectual property or other rights that limit the facilitated access to the plant genetic resources for food and agriculture, or their genetic parts or components, in the form received from the Multilateral System.” Ratified by 139 countries, the treaty also includes a provision on farmers’ rights to save, use, exchange, and sell farm-saved seed. The U.S. refused to endorse the treaty in 2001 but eventually signed (but did not ratify) in 2002. This May, the Senate Foreign Relations Committee held a hearing on the treaty, and in June it urged the full Senate to consider ratification of the bill.

The timing of the new hearing seems to coincide with renewed efforts by multinational seed companies to influence its implementation. A report published by Third World Network on a July meeting of parties to the ITPGRFA described strong positions by African governments for a mandatory “subscription system,” with payments based on a percentage of seed sales and license income. According to the report, while the U.S. is not a party, a U.S. delegate participated as part of the Canadian delegation, arguing for limits on the new proposals. A Monsanto representative participating as a stakeholder criticized the postponement of a proposal for a termination clause, which would eliminate any requirement for benefit-sharing payments after a fixed number of years. Developing countries argued against a termination clause, since companies could simply hold onto germplasm until they wouldn’t need to make payments. Negotiations are also underway over genetic sequence data (“dematerialization”), an issue that is also being debated more broadly (beyond plants and seeds) at the CBD and the World Intellectual Property Organization.

At the Senate hearing, John Schoeneker, testifying on behalf of the American Seed Trade Association (ASTA, whose leadership includes representatives of Bayer, Dupont and Syngenta) and the State Department urged ratification of the Seed Treaty, which would require no changes to U.S. laws but would enable access to the seedbank. An ASTA letter to the Foreign Relations Committee signed by 80 farm and seed business groups urged ratification, saying, “Currently, public and private sector breeders are vulnerable to the Nagoya Protocol, which was established under the auspices of the Convention on Biological Diversity and goes beyond the agriculture sector. The Nagoya Protocol is a far less favorable option [than the ITPGRFA] for germplasm exchange for U.S. agriculture researchers and the entire U.S. seed sector.”

The UN Special Rapporteur on the Right to Food, the South Centre, Berne Declaration, and Third World Network, among others, have pointed out the contradictions among the rules established in these various treaties. The point now is not so much whether or not the Senate should ratify this treaty, but who decides on the rules about sharing these resources, and how those decisions are implemented. The ITPGRFA broke new ground on farmers’ rights over seeds and genetic resources, an advance that is effectively eroding under the TPP language and the proposed mergers. The balance needs to tilt back the other way, starting with enforceable new policy to establish that the right to food, biodiversity, and farmers’ rights take precedence over agribusiness profits, whether in these treaties or in trade deals. Ensuring that farmers around the world have access to seeds and seed breeding will be critical to climate change adaptation. Leaving agribusiness firms to set the rules on access to seeds and other genetic materials is a recipe for further corporate concentration and fewer good options for family farmers, local communities, and biodiversity.

Article: The world seed conference: good for farmers?
Rather than a push for techno-fixes and tightened intellectual property rights that characterised the recent World Seed Conference, we need a new paradigm...
Article: Monsanto Tribunal and People’s Assembly
Civil society groups have organised a people’s assembly to hold Monsanto accountable for their crimes against humanity and the environment, and to spell...
Article: On seed freedom and sharing
The seed freedom movement is an inspiring example of how the principle of sharing is central to resolving the crisis in agriculture, and highlights the...
Printer-friendly version