The struggle continues for a binding treaty to #StopCorporateAbuse 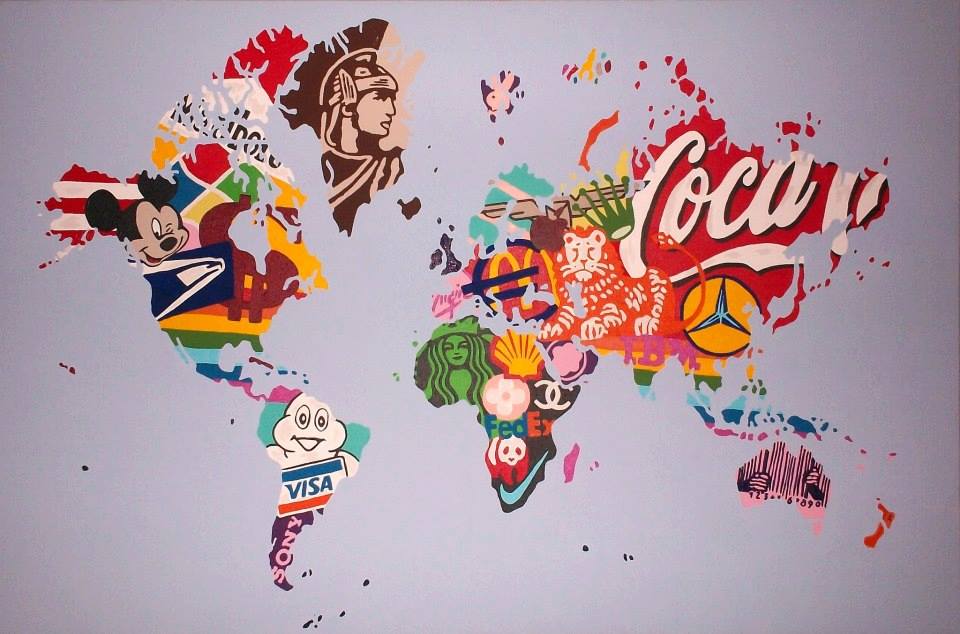 A binding treaty to regulate the activities of corporations could provide a vital counterpoint to controversial free trade and investment agreements, with potentially radical implications for a new international political, economic and legal order.

In the last week of October, civil society came another step closer to achieving a legally binding instrument on transnational corporations (TNCs) and other business enterprises with respect to human rights. Delegates from many large social movements and networks met alongside state representatives at the UN Human Rights Council in Geneva, Switzerland, to further proceedings for an open-ended intergovernmental working group set up two years ago. Despite considerable opposition from Western powers to a binding treaty in any form (particularly the United States, United Kingdom and other countries of the European Union), activist groups are now ramping up the struggle as part of a Global Campaign to Reclaim Peoples’ Sovereignty, Dismantle Corporate Power and Stop Impunity.

The fact that this process is now an official part of the UN agenda is itself remarkable. Since the 1970s, there have been a long series of failed attempts to develop binding international systems to regulate corporations for their human rights violations. The abortive efforts to create a code of conduct for TNCs through the UN Economic and Social Council (ECOSOC) were completely thwarted by the early 1990s, until fresh proceedings were launched in 1998 under a subordinate body of the then-Human Rights Commission. In 2003, the Sub-Commission approved a ‘non-voluntary’ set of norms that could hold TNCs accountable, although these were rigidly opposed by the business sector, and ultimately declared to have ‘no legal standing’ by the Human Rights Commission.

As an alternative, the UN Secretary-General Kofi Annan appointed a Special Representative for Business and Human Rights, Professor John Ruggie, who became renowned for pursuing a less ambitious or ‘partnership’ approach to corporate regulation. His UN Guiding Principles, when eventually released in 2011, were accepted by all governments but remain voluntary and non-binding, only calling on corporations to act with due diligence. Civil society organisations wholly decried the inadequacy of the proposed follow-up mechanisms, which they stated even risked undermining efforts to strengthen corporate responsibility and accountability for human rights.

Against this background, it was therefore a huge step forward in 2013 when a grouping of countries, predominantly from the Global South, called for a renewal of efforts towards a legally binding framework to regulate the activities of TNCs and to provide appropriate protection, justice and remedy to the victims of human rights abuses. An historic resolution was adopted by a majority of States (again mostly from the Global South, including Russia and China) at the Human Rights Council in June 2014, establishing an intergovernmental working group with the mandate of drafting a legally binding instrument. It is the first time in almost 25 years that a UN intergovernmental body is dedicating itself to the regulation of corporations, which is set to be an intensive process with considerable hurdles if a genuine legal regime for TNCs is to be eventually agreed and implemented.

The case for holding TNCs to account for their activities could not be tighter, considering the gap that exists in the international legal architecture which means they cannot be prosecuted directly for human rights abuses. Yet the harm that TNCs are wreaking is well-documented, referred to by the Global Campaign as ‘damage to life’; for example, through repressing social struggles and resistance, causing pollution in the extractivist industries, displacing indigenous peoples from their land, exploiting workers through poor labour conditions, and so on. Over several years, a Permanent People’s Tribunal has given representatives from affected communities the opportunity to testify on the socio-environmental impacts of harmful corporate activities, and to highlight the numerable cases that demonstrate how TNCs are able to act with effective impunity. Indeed it is the consistent work of many human rights defenders that has brought the issue of corporate impunity to the agenda of the Human Rights Council, leading to demands for the rights of affected persons to be central to a binding treaty, both in terms of regulation and remedy.

Campaigners talk of an entire ‘architecture of impunity’ that has protected the operations of TNCs for decades, and placed the rights of corporations above the rights of people through the privatisation of legal norms and institutions. Some of the largest TNCs have greater economic power than many nation states, while their tremendous political power is reinforced and protected on a legal level by a multitude of norms, treaties and agreements. Often described as a new global corporate law, or the lex mercatoria, it is made up of mechanisms such as the Investor to State Dispute Settlement (ISDS) provisions and arbitration tribunals that are enshrined in bilateral trade agreements; or the International Monetary Fund’s imposed structural adjustment programs (now replicated in Europe under the so-called Competitiveness Pact policies); or the World Trade Organisation’s dispute-settlement system. While the rights of TNCs are shielded by this complex global legal framework based on trade and investment rules, there are no adequate counterweights or enforceable mechanisms to control the social, cultural, environmental or labour impacts of their operations. The result is a normative asymmetry between the binding norms that protect investor interests, and the soft law that reduces TNCs obligation to respect human rights to mere voluntary measures. 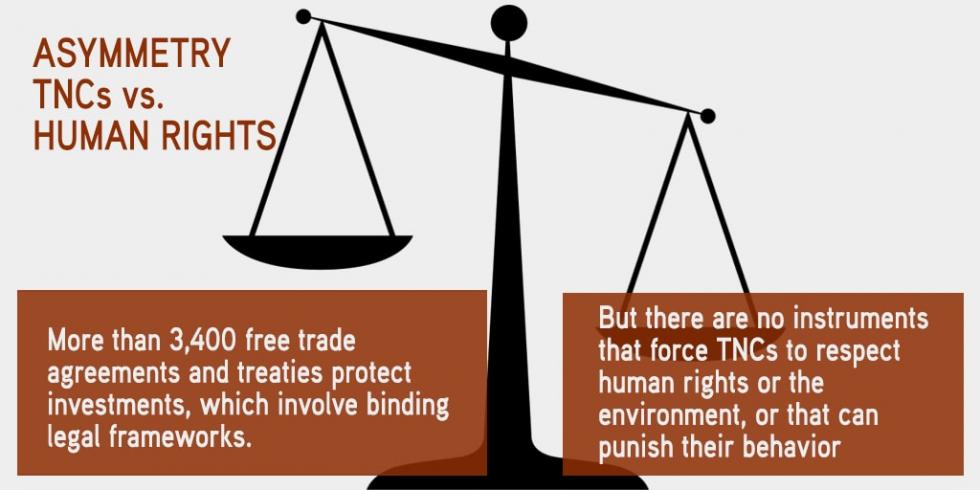 A binding treaty to regulate the activities of TNCs could therefore provide a vital counterpoint to the controversial free trade and investment agreements that are being continually negotiated in secret, without any democratic legitimacy. As the UN’s Independent Expert on the Promotion of a Democratic and Equitable International Order, Alfred de Zayas, has forcefully argued, these ongoing agreements – such as the TTIP, TPP, CETA and TISA - are all prepared without the inclusion of key stakeholders or parliaments, and are thus in direct violation of international human rights law. They also enable international investors to override the national sovereignty of democratic States, and seek to impose their own system of ‘arbitration’ that isn’t required to adhere to any nation’s law and constitution. Inequality and asymmetry are built into the legal foundations of the current trade and investment regime, which is solely intended to serve the immediate profits of investors, speculators and transnational enterprises, at the wider expense of social and economic progress.

In this context, the implications of mainstreaming human rights into trade agreements and WTO practice through a legally binding instrument are potentially radical and transformative. The basic intent of civil society proposals is to invert the international normative pyramid to place the rights of social majorities at the top, hence the repeated calls for a final treaty to obligate States to introduce a binding human rights supremacy clause into all trade and investment agreements they sign, in conformity with the principles of the UN Charter. The repeated calls for States to comply with their extraterritorial obligations in the area of economic, social and cultural rights - as set down in the Maastrict Principles – is also central for ensuring that human rights can assume their rightful role as the legal basis for regulating global trade and finance.

As a result of invoking the pre-eminence of these hierarchically superior norms, it could require renegotiating all existing trade and investment agreements, and could certainly overturn the investor-to-state dispute settlement (ISDS) regime, as well as the secretive corporate arbitration system in its entirety. Indeed if States and TNCs were truly compelled to respect and comply with the conventions, recommendations and declarations that are the established basis of international human rights law, then it could lead to an exhaustive list of necessary reforms to the global economic system: strict regulations on financial transactions and speculation, the closure of tax havens, the cancellation of illegitimate public and sovereign debt, the reversal of privatisations on public goods and services to ensure the right to food and health, and so much more.

This greater vision is upheld by a joint civil society proposal to elaborate an International People’s Treaty, which aims to go much further than articulating the need for control mechanisms to halt human rights violations committed by TNCs. The growing demand for access to justice is also linked to the ideal of creating international law “from below”, and establishing “peoples’ sovereignty over the commons” by opposing the expansion of TNCs into sectors that should be controlled by communities and citizens. As part of a work-in-progress, the current base document for global consultation has a lengthy section on alternatives to the dominant socioeconomic paradigm, emerging from the experiences and proposals of the many social movements, scholars, activists and affected communities who are resisting the growing power of TNCs in their diverse spheres.

At the centre of these proposals is the need to promote effective mechanisms for the realisation of fundamental human rights as governments formulate a new international political, economic and legal order, based upon an equitable distribution of wealth and respect for nature. The principle of sharing is therefore recognised as the basis of all transitional measures that promote cooperation and solidarity, as emphasised in the section of the People’s Treaty on envisioning new economies:

“To address the basic needs of more than half of the world’s population and end the disruption of the vital cycles of the Earth system, global and national economies have to redistribute wealth to reduce asymmetries under the limits of nature. Some sectors and countries still need to improve their wellbeing while others need to reduce their overconsumption and waste. Well-being for all will only be sustainable when we share what is possible and available. The real challenge is not only to eliminate poverty but, more importantly, to eliminate the concentration of wealth and power and achieve economic and social justice based on rights.”

No doubt many will dismiss this broader vision of global equity and justice as politically unrealistic, in light of the growing number of corporate abuse scandals across the world, and the continuing disregard for basic labour and human rights standards in many developing countries. Campaigning groups are still trying to resist corporate capture of the process for a binding treaty through the Human Rights Council, and are calling on all States to at least participate in good faith, considering the overt antagonism of the European Union during the first session held in 2015. The prospect of achieving a concrete draft proposal next year in line with progressive civil society demands is currently less than optimistic, even with the staunch support of countries like Ecuador, Cuba and Bolivia. Without massive, worldwide and continual support from ordinary citizens for securing the basic socioeconomic rights of all – as envisioned in STWR’s flagship publication, Heralding Article 25 – the balance of power will remain firmly in the hands of transnational capital and its servile political representatives.

Nevertheless, the treaty process remains an important opportunity for interlinking popular resistance struggles, building counterpower, and slowly cracking the immense wall of corporate impunity. It is a process that should concern not only human rights activists, but everyone who campaigns for a more democratic, sustainable and egalitarian world that places people and nature ahead of transnational corporate interests.

Storify on the Second Session of the Open Ended Inter-Governmental Working Group (OEIGWG) at the Human Rights Council: #StopCorporateAbuse with a #BindingTreaty

Jens Martens and Karolin Seitz: The struggle for a UN Treaty: Towards Global Regulation on Human Rights and Business, Rosa Luxemburg Stiftung

UN Human Rights Council: Draft report of the second session of the open-ended intergovernmental working group on transnational corporations and other business enterprises with respect to human rights

Adam Parsons is the editor at Share The World's Resources