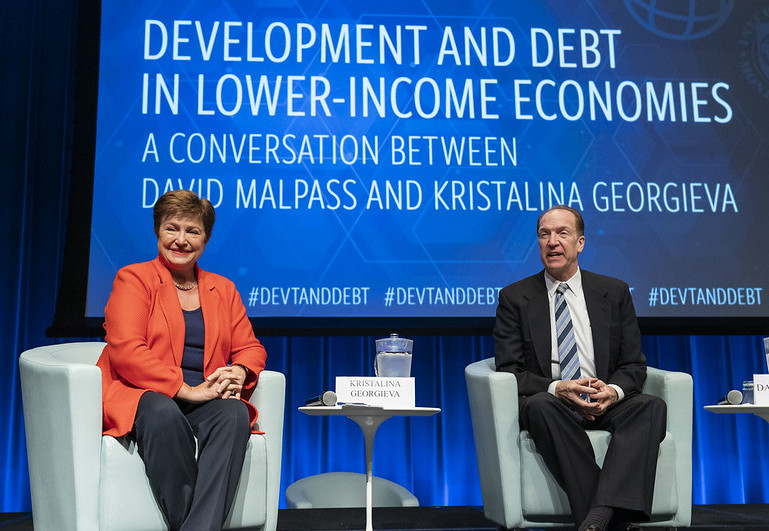 Despite decades of protests against them, the IMF and World Bank continue to force the same discredited policies on poor governments and their people, writes Lara Merling for Jacobin.

The International Monetary Fund (IMF) and World Bank played a central role in shaping our current model of globalization, imposing policies that held countries back from climbing up the income ladder, weakened health systems, and subordinated development outcomes to the whims of private capital. As the vulnerabilities of this model are yet again laid bare, now through the crisis caused by COVID-19, the institutions are portraying themselves as experts that stand ready to guide the world through this crisis.

This rebranding strategy is not new. For decades, shifts in rhetoric and superficial reforms have allowed the IMF and World Bank to deflect criticism and avoid accountability for the damage they have caused around the world. These successful communications strategies have also earned the institution favorable coverage throughout the current crisis, when the media has focused on their stated commitments to support the recovery, failing to mention their dismal track record of economic projections, or the disastrous results of their past policy interventions.

The IMF has stepped up to provide about a hundred countries with much-needed emergency financing and has advocated for debt moratoriums. Going even further, the IMF has encouraged countries to spend more on their health systems and social protections. These actions have garnered glowing coverageof the institution, which has mostly escaped scrutiny over decades of demanding cuts in spending in those same areas. Yet as it now encourages countries to spend more, there is no indication that once countries transition from relatively small emergency loans into full-fledged programs, the IMF would not again shift to its old playbook of austerity and deregulation. It did so when developing its loan programs in the aftermath of the global financial crisis, after initial calls for more stimulus. Its most recent Fiscal Monitor hints that once the virus is defeated, countries need to return to fiscal consolidation.

Similarly, the World Bank talks about how it is helping one hundred countries in their fight against COVID-19, “helping strengthen health systems, protect the poorest and support jobs.” Yet much of this support has gone to the World Bank’s private-sector clients, and no commitments have been made that health care financing will not support earlier efforts to privatize health care provision. In less subtle ways than the IMF, World Bank president David Malpass has explicitly stated his institution will help countries recover by eliminating “excessive” regulation and pursuing structural reforms. Furthermore, the World Bank continues its focus on the explicit financialization of development, through its “Maximizing Finance for Development” campaign. This initiative proposes an explicit reorganization of World Bank operations away from project investments, and toward more policy lending designed to attract more financial investment.

A track record of failure

To justify their policy choices, these institutions consistently claim to simply follow “sound” economic principles and portray themselves as experts, with an approach based on evidence, not ideology. Yet, despite this “sound” framework, the on-the-ground results point to a different conclusion. Take the simplest measure possible. For decades, developing countries have been trapped in cycles of debt, poverty, and low growth. Have any poor countries that followed the advice from the IMF and World Bank become significantly richer? No.

For the IMF and the World Bank, sound policies are designed to “unleash” private investment (mostly foreign), through a combination of deregulation, limiting the role of the state, and liberalizing trade and capital flows. Attacks on labor rights and the suppression of wages are key components of this strategy because cheap labor supposedly attracts more investment. The public sector, the consensus goes, stands in the way of more efficient private entities, and so it is reduced in size. In the 1980s and 1990s, all these policies were rolled together in what was termed the Washington Consensus and imposed by the IMF and World Bank through “structural adjustment programs” (SAPs).

Little in this framework is rooted in evidence. These policies are derived from neoclassical economics and driven by a deeply ideological market fundamentalism. Neoclassical economics is the dominant school of thought in most US-based universities, and uses a “scientific” approach to economics — generating sophisticated mathematical models to analyze economic outcomes — to hide its ideological underpinnings. The scientific rigor of its models, after all, is built upon underlying assumptions, which are often fatally flawed. It is in those assumptions — often hidden by researchers and reporters — where ideological views about things such as human behavior and markets are incorporated.

These models frequently assume away the effects of institutions, power dynamics, and political economy, and focus on the supply side of the economy. This involves claiming that by supporting “job creators,” the benefits of growth will eventually trickle down to all workers — an unsupported theory commonly wielded by the American right wing.

IMF and World Bank policy prescriptions, derived from this school of economic thought, are often completely inconsistent with the actual history of how countries industrialized and became rich. Historically, the state has played a pivotal role in shaping policies and guiding private-sector investments. Most developed countries adopted some form of industrial policy in their past.

So why did the IMF and World Bank adopt this framework? At the time, economists, especially outside of the US academic world, were still having heated debates on the best development strategies. But US politics, and the United States’ effective control of both the IMF and World Bank, ensured that the neoclassical approach would be strictly enforced on all the countries that borrowed funds from these institutions.

It was James Baker, a US Treasury official in Ronald Reagan’s administration, who devised the plan to impose these policies through loan conditionality. Disbursements of funds would be explicitly conditioned on the implementation of the required policy package. The Baker Plan, released in 1985, coincided with most developing countries facing debt crises, brewing since the United States sharply raised interest rates under Federal Reserve chairman Paul Volcker. This made dollar-denominated debt difficult to service and refinance. Having nowhere else to turn for funds, these countries were forced to go to the IMF and World Bank.

This shift in how the IMF and World Bank operated took place without making any official changes to the stated missions of the institutions or their underlying charters. At least on paper, the IMF’s mandate continued to be the promotion of global financial stability along with high levels of employment and income. On paper, the World Bank’s mission is the eradication of poverty. Based on the results of the nearly four-decades-long use of structural adjustment programs, the IMF and World Bank appear not to be meeting their respective mandates.

By the late 1990s and early 2000s, opposition to the IMF and World Bank was on the rise globally. As pressure increased, SAPs officially came to an end. This coincided with two debt relief initiatives for the poorest countries, accompanied by programs that explicitly targeted poverty reduction. Both institutions have since increased the transparency of their operations and opened more channels of dialogue with civil society. Both institutions have also made strong commitments toward gender equality and expressed concern over climate issues, which have helped reshape their public image.

Yet despite these changes, not much has changed when it comes to the policies the IMF and World Bank continue to push on countries around the world. Although the Washington Consensus no longer reigns as a complete set of policies to be implemented simultaneously without attention to local conditions, its elements and underlying logic are alive and well. The IMF has branched out its research into work on inequality, and it has published research papers that challenge the economic model it imposed. Ironically, most of that research is not incorporated into actual loan programs.

Even the IMF’s own internal reviews recognize the institution is unable to make correct economic projections and that it has a long pattern of underestimating the negative impacts of austerity. At the same time, it overestimates the positive impacts of structural reforms. In the past year, the IMF has published research promoting the same discredited policies while attempting to explain its pattern of failure by shifting the blame away from itself and onto the leaders of borrowing countries for not pushing reforms hard enough, or onto voters for rejecting and reversing reforms.

International organizations, especially key players in the world economy like the IMF and World Bank, shouldn’t be able to shirk responsibility for their repeated and continual failures. These failures not only have a terrible economic toll — they have an even more inexcusable human toll. Rhetoric and rebranding are an insult to those who have suffered under these policies for decades, and those who continue to suffer from the effects of those policies during the COVID-19 crisis.

Unless there are substantial changes to both organizations, the “experts” who got almost everything wrong over the past four decades should not guide recovery. Instead, it is time to listen to other international organizations, such as the UN Conference on Trade and Development and the International Labour Organization, which have a much better track record when it comes to making economic predictions, and have consistently presented alternative policies to achieve a sustainable development model that prioritizes full employment, sustainability, and financial stability. Greater coherence and cooperation between international organizations is needed, ending a pattern in which the IMF and World Bank undermine important efforts at human development.

A failure to do so simply opens the door for more loans and more programs and more failed policies that will continue to keep countries stuck in the same downward spirals of austerity, recessions, poverty, and debt.

Lara Merling is an economics researcher at the International Trade Union Confederation, which represents 200 million workers in 163 countries, and a senior research fellow at the Center for Economic and Policy Research.

Article: People in the Global South don’t need debt relief, they need a new system
Far from being the 'great leveller', COVID-19 has exposed and deepened socio-economic inequalities, writes Meera Karunananthan for openDemocracy.
News: Urgent call to head off new debt crisis in developing world
Rapid action is needed to head off the risk of a new debt crisis in the world’s poorest countries amid evidence that the Covid-19 pandemic is raising...
Article: New leadership for the IMF, same old hypocrisy?
With its latest pronouncements on the threat of rising inequality, can we expect to see an International Monetary Fund that firmly rejects the austerity...
Report: IMF should abandon "failed policies", says human rights reporteur
The International Monetary Fund (IMF) should change its priorities and finally let go of the outdated conditionalities of privatization, deregulation of...
Report: Decommissioning The IMF, World Bank and WTO
This brief analyses the negative impacts of the IMF, World Bank and WTO on sustainable development and suggests an alternative mechanism for regulating...
Printer-friendly version