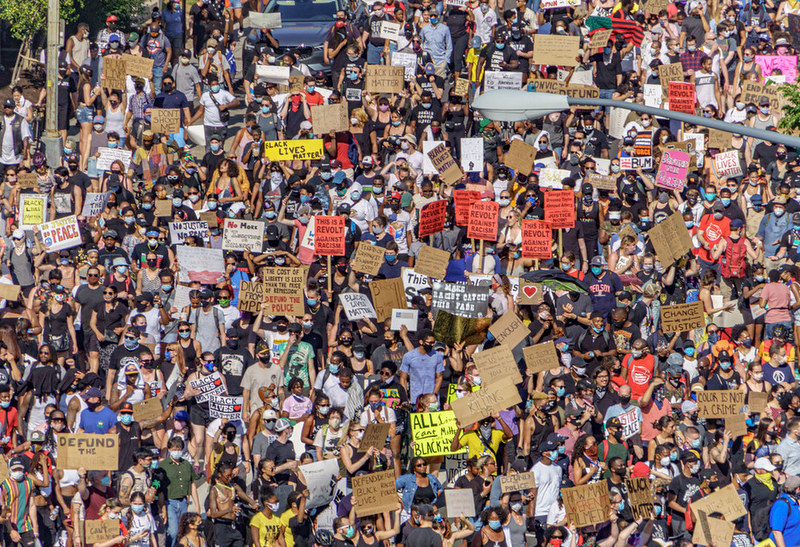 Despite the coronavirus pandemic, we are experiencing a continuation of rising outrage and street protests throughout the world. Governments need to listen to the demands from citizens legitimately protesting the denial of social, economic and civil rights, write Isabel Ortiz, Sara Burke and Hernan Cortes Saenz for IPS news.

After a period of forced silence because of the Covid-19 quarantines, citizens around the world are defying coronavirus restrictions and claiming the streets to fight for real democracy, jobs, living wages, public services, human rights and against corruption, inequality and injustice. We predict an increasing wave of protests all over the world led by different types of people defying the status quo. Unless policies change, clashes in the street are likely to become the new normal.

In the last weeks, we have seen protests against racism and police brutality explode in the US and internationally after another black man died in police custody. We see Chileans protesting lockdown-food shortages, scarcity of work, and costly social services, and Ecuadorans demonstrating against IMF-supported austerity cuts. Lebanon has convulsed with riots over corruption, lack of jobs and public services.

Protesters in Hong Kong continue to defy China’s tightening grip. In Israel they denounce West Bank annexation, while in the Philippines they condemn President Duterte’s Anti-Terrorism Act as a breach of civil rights and the Constitution. Young people are taking to the streets in Senegal over the lockdown and lack of jobs and opportunities. In Spain we see health workers demanding safer working conditions while workers from other industries face massive layoffs. In many countries, people protest in car-based caravans to maintain social distancing because of the pandemic.

There have been periods in history when large numbers of people rebelled against the status quo and demanded change, such as in 1848, 1917 and 1968. While protests have intensified in recent weeks because of the pandemic, the level of protests worldwide has remained high for more than a decade, with some of the largest protests in world history. They were set off by the 2008 financial crisis and commodity price spikes, such as those that sparked food riots in Africa and Asia, three years before the “Arab Spring”, the “Indignados” (Outraged) in Spain or “Occupy” in the US and Hong Kong.

More recently, we have seen massive protests in Latin America and a global feminist wave set off by the “Me Too” movement. Now, as Covid-19 makes its way around the world, we are experiencing the continuation of this period of rising outrage and discontent.

We have been studying recent world protests and found interesting lessons. To start, the number of protests has been increasing on a yearly basis. Protesters’ main general demand was for economic and social justice in the face of prescribed “austerity” reforms; however, the overwhelming grievance of protesters, regardless of the political system of their country, was the lack of “real democracy”. Other common demands relate to people’s rights such as racial, gender or labor rights. The main target of the protests was national governments, but global institutions and corporations were also targeted.

A profile of demonstrators reveals that not only traditional protesters (eg. activists, unions) are demonstrating; on the contrary, middle classes, youth, older persons and other social groups are actively protesting in most countries because of lack of trust and disillusionment with the current political and economic system.

People around the world are acutely aware that policy-making has not prioritized them. Across the political spectrum, there is rebellion against politics as usual. Governments both authoritarian and democratic are failing to respond to the needs of ordinary people. Many demonstrations and marches also explicitly denounce the international system and institutions such as the International Monetary Fund, the World Bank and the European Central Bank, which have been widely perceived as the chief architects of inequitable reforms.

Repression is well documented in over half of the protests in our study. According to media reports, the protests that generated the most arrests were in Iran, the UK, Russia, Chile, Malaysia, US and Cameroon (different years). Our research, that we continue updating, also documents a rising concern with some modes of repression that do not imply the use of physical violence: citizen surveillance.

If there is repression, what are the controversial demands that protesters are putting forward? The grievances demanded cross over virtually every area of public policy, from jobs, public services and social protection to the environment, finance, taxation, corruption and justice. The majority of the demands are in full accordance with United Nations proposals and the Universal Declaration of Human Rights.

Governments need to listen to the demands from citizens legitimately protesting the denial of social, economic and civil rights. Leaders and policymakers will only invite further unrest if they fail to prioritize and act on the demand for real democracy.

Isabel Ortiz is Director of the Global Social Justice Program at the Initiative for Policy Dialogue, Columbia University, and former director of the International Labour Organization (ILO) and UNICEF.

Sara Burke is Senior Policy Analyst at Friedrich-Ebert-Stiftung (FES; for identification purposes only; views do not reflect the institutional views of FES).

Report: Heralding Article 25: A people's strategy for world transformation
After so many years of political inaction only the massed goodwill of ordinary people can bring about an end to poverty in a world of plenty through...
Page: Join our campaigns for Article 25
Find out more information about our current campaigning initiatives and events. You can sign up to join us on demonstrations for Article 25; download...
Article: The cry for justice
As the economic crisis worsens, the foremost responsibility of governments is to redesign our political and economic systems so that no-one dies of hunger...
Blog: Achieving social justice on an overpopulated planet
Only through a peaceful mass movement on a global scale, putting the needs of the poorest first and foremost, will we finally set foot on the road to a...
Printer-friendly version