After the Paris attacks: affirming our common humanity through a global call for sharing 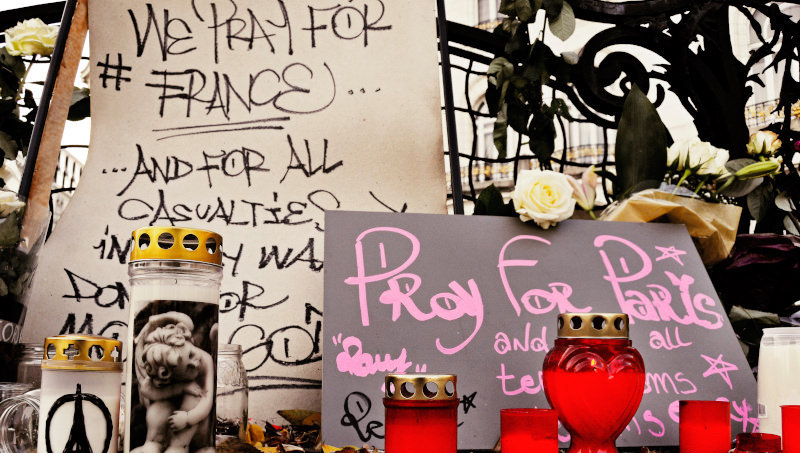 The terrorist attacks in Paris compels us to acknowledge the deeper causes of the resentment that gave rise to ISIS, and to unite behind a far-reaching demand for sharing the world’s resources.

A week after the brutal terrorist attacks in Paris, the Western world is still coming to terms with the horrific violence that was perpetrated on large numbers of innocent civilians. Understandably, there is much fear among the people of Europe and other Western states that further atrocities will be committed in the near future – not least within the United States in light of the Obama administration’s air war against ISIS in Iraq and Syria since 2014. Endless news reports and articles continue to debate how the community of nations should further respond to this urgent threat of Islamic extremism. But what should be the collective response of ordinary people of goodwill in the face of these atrocities, and how can we truly affirm our common humanity in the immediate time ahead?

While France and other Western states clamour for a “pitiless” war against terrorism, only the relatively few progressive voices are calling for an alternative to increased military intervention. Among these anti-war and peace activists, one of the most radical propositions comes from Rabbi Michael Lerner who advocates for an entirely new approach to “homeland security” – one that firmly integrates the principle of sharing into world affairs through a “strategy of generosity” and massive redistribution of resources led by the popular will of America.

In his latest editorial for Tikkun Magazine, Rabbi Lerner reiterates the need for us to embrace a new worldview that understands “our mutual interdependence and oneness”. This calls for an informed understanding that militaristic solutions can never bring lasting peace and security, and that you can’t simply bomb an extremist ideology out of existence. It also means acknowledging the deeper causes of the resentment that gave rise to ISIS, which would include the past 14 years of failed Western interventions across the Middle East and north Africa – where close to 300,000 people have been killed, hundreds of thousands injured, and millions forced from their homes.

More than this, however, it means acknowledging the unequal distribution of global wealth and resulting extremes of poverty that inevitably fuels resentment against the West. Rabbi Lerner cites the official UN estimates that up to 9,000 children under five die each day from preventable poverty-related causes, while at least 2.8 billion people live on less than $2 a day. Such is the “structural violence” that everyone in advanced industrial societies is morally implicated in, caused in large part by the unjust structural arrangements of the global economy that benefit big corporations and a privileged minority of the world population, at the expense of the majority of the Global South.

Embracing this broader awareness of our divided world does not remotely vindicate the reactionary force of ISIS and similar groups, who represent a level of murderous brutality unparalleled in the twenty-first century. But the horror witnessed in Paris calls on us to reflect anew on the “cumulative effects of a world lacking generosity of spirit and generosity of action”, which – as Rabbi Lerner articulates – “plays an important role in shaping the psychological underpinning that leads people to act out in various ways, of which ISIS is only one manifestation”. Now more than ever, we are called upon to shift our sympathies and solidarity from solely “We are all France”, to “We are the whole world”.

So what can we do to translate our global empathy with the suffering of humanity as a whole into practical, constructive action? First of all, we can follow Rabbi Lerner’s instruction to play a role in resisting the dominant discourse that pushes for increased military interventions on the basis of fear and revenge, and we can try and convince others to adopt this “new consciousness”. This may compel us to support the campaigns and activism of the many progressive groups who oppose an escalation of the destructive bombing in Syria and Iraq, which will only intensify the chaos and suffering in these war-torn regions, leading to an even greater influx of refugees to Europe and increased bitterness against the West. The many alternative options for curtailing the threat of ISIS remain largely outside of mainstream public debate, such as an international arms embargo or the empowerment of the United Nations in negotiating real political and diplomatic solutions.

But if we wholly embrace the emerging new consciousness that Rabbi Lerner speaks of, then we may also see the necessity of uniting behind a demand for sharing global resources rather than “simply focusing on resisting the policies of the right”. In a newsletter accompanying the Tikkun editorial, Rabbi Lerner questions whether the events in Paris represent a wake-up call to help us see that the only real response is to build a massive, peaceful social movement that can “take back our country and our world”. He writes:

“Perhaps this moment is a call to action – not to create a false sense of safety or security or to turn more inward – for ordinary people to rise-up and lead because our leaders are failing us. They continue to promote and use the same strategies of violence, weapons and war to try to bomb the world to peace and impose global capitalism around the globe. And yet we know this strategy and approach has not worked for thousands of years and it will not work now.

… It is time for a sea change and it is we, the people, who are the only ones who can create it.

… We will not be safe until everyone on the planet is safe. Until all lives are valued. Until everyone has the resources they need to live peacefully, securely, eat healthy food, have drinking water, education, functioning communities, healthcare, etc. We need to stand-up in a loving, compassionate, powerful and nonviolent collective way and demand that our leaders do what is needed to build a safer world for ourselves and everyone else on the planet and to make it clear that more weapons and more violence is not the path.

… [We need to] mobilize people to take to the streets in massive nonviolent civil disobedience demanding that those who support continued wars and those who support weapons industries either withdraw their support or we will vote them out of office. To demand that we move from a homeland security policy of power over, domination and submission to a strategy of generosity and kindness. To demand that our leaders are actually beholden to the people they represent, not the wealthiest individuals and corporations. To demand that corporations be socially and environmentally responsible.

This is a crucial moment in history. Let’s capitalize on it ourselves rather than leave it to the warmongers to do so because we know what will happen if they do. With a massive movement, we can turn to the light and away from the darkness but to do so will require each and every one of us to get out of our offices, our houses, our schools, our communities and even our comfort zones and take to the streets.

What do you say?”

Report: A primer on global economic sharing
In an increasingly unequal and unsustainable world, governments must urgently move beyond the restrictive political and economic ideologies of the past...
Page: Global economic sharing
We live in a globalised world where the crises we face, from wealth disparities to climate change and resource wars, affect all nations to a greater or...
Report: Financing the global sharing economy, part three (5): increase international aid
This section of the report Financing the Global Sharing Economy argues that there can be no justification for advanced economies redistributing so little...
Article: New visions of global solidarity
In this latest editorial we’re highlighting some of the various ways in which a call for sharing is being expressed in the field of international...
Printer-friendly version