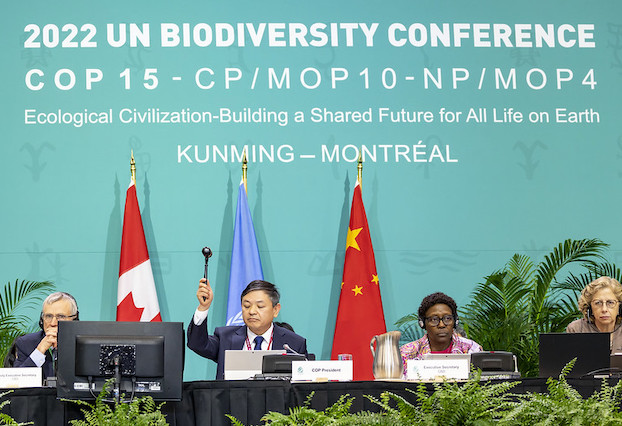 A lack of financial resources was a major sticking point at the talks, as well as vague commitments on reducing consumption and production. Report by Catherine Early for The Ecologist.

A deal aimed at ending mankind’s destruction of nature has been agreed today at UN COP15 talks in Montreal, Canada.

Governments have signed up to an overarching global goal of halting and reversing biodiversity loss by 2030, which some have hailed as the equivalent to the climate target to keep global temperature rise within 1.5C.

Scientists have estimated that one million species already face extinction, many within decades, unless urgent action is taken.

The talks were originally due to take place in Kunming, China in October 2020, but have been repeatedly delayed by the COVID-19 pandemic and were eventually moved to Canada.

The two weeks of talks have followed three years of discussion of highly technical issues including how much land and sea to protect, how to measure and monitor progress, how to finance increased protection, particularly in poorer countries where much of the world’s biodiversity is concentrated, and how to reform the drivers of biodiversity loss, such as subsidies that incentivise unsustainable extraction and consumption.

The headline target - to protect at least 30 per cent of land, fresh water and oceans by 2030 - matches what scientists and campaigners had been calling for. It also explicitly recognises indigenous peoples' rights, roles, territories, and knowledge as the most effective biodiversity protection.

Indigenous peoples had initially wanted their territories to be formally included as a pathway to choosing the areas that will comprise the 30 per cent, but this did not make it into the final text.

However, Jennifer Corpuz, who represents 10,000 indigenous peoples through the International Indigenous Forum on Biodiversity, said that though the final text was not the exact wording it had proposed, it was a “good compromise”.

“It addresses the concerns that we have, and we think that it’s a good basis for us to be able to influence policy at the national level,” she said.

However, the 30 x 30 target lacks qualifiers that exclude damaging activities from protected areas. “It is just an empty number, with protections on paper but nowhere else,” said An Lambrechts, head of the Greenpeace delegation at COP15.

One of the key sticking points throughout the talks was finance. The amount of money needed to halt the decline of nature is estimated at $700 billion a year, but current financial flows amount to only $154 billion per year, according to the UN environment programme (UNEP).

A lack of financial resources was one of the main reasons that none of the Aichi targets were fully met.

Several developing countries refused to sign up to the “30 x 30” protected areas target until richer nations pledged sufficient funds to help them meet it. During one late-night discussion, developing countries walked out of the talks, frustrated at a lack of commitments from developed countries.

There was also disagreement over how the funding would be managed, with African countries demanding a new, separate fund be set up, while others, such as the EU, wanting to continue to use existing UN funding routes.

The row over the fund nearly derailed the deal at the last moment, as the final plenary to sign off the document started hours late after the Democratic Republic of Congo said it opposed the text, which proposed a new fund earmarked for biodiversity to be created by 2023 under the UN’s existing Global Environment Fund. It will also be open to other sources of funds, including from the private sector and philanthropy.

Several countries pledged increased levels of funding during COP15, including France, which announced a doubling of international finance for biodiversity to reach €1 billion per year by 2025; Germany, which will increase its international biodiversity funding to €1.5 billion by 2025, and COP15 host Canada, which committed $350 million.

Countries will also need to take action on subsidies, identifying those that harm nature by 2025, such as subsidies that encourage intensive farming, and reduce them by at least $500 billion per year by 2030.

However, campaigners were disappointed that there is no numerical target on reducing consumption and production, key drivers of biodiversity loss. The agreement states that countries will reduce the global footprint of consumption “in an equitable manner” and “significantly reduce overconsumption”.

The framework also does not include any mechanism to review individual countries’ progress towards implementation, which many campaigners warn could jeopardise the agreement’s success.

Greenpeace was very critical of the deal, which includes the phrase “nature based solutions” – which is widely accepted by governments in other agreements such as climate, but seen as controversial in the biodiversity talks.

“Corporate schemes like nature-based solutions and offsets leeched on to the UN biodiversity talks from start to finish,” Lambrechts said. “These are false solutions that may prove to be costly mistakes. The scandals and greenwashing you see in carbon offsetting today are what’s on the menu for biodiversity tomorrow."

WWF was more positive. “Two weeks’ ago, we had a mountain of differences to resolve. Today, we leave with an agreement that starts, at least, to heal our relationship to nature,” said Lin Li, the organisation’s senior director of global policy and advocacy.

Catherine Early is chief reporter for The Ecologist.

Report: World spends $1.8tn a year on subsidies that harm environment, study finds
The world is spending at least $1.8tn every year on subsidies driving the annihilation of wildlife and a rise in global heating, according to a new study...
Report: 'Ecological Ponzi scheme' threatens to bring down humanity, scientists warn
Accelerating biodiversity loss, climate change and over-consumption are swiftly pushing human societies toward a “ghastly future” of growing hunger,...
Blog: The suicidal war on nature continues unabated – International Mother Earth Day
There is plenty of information alerting against the ongoing devastating human war on Mother Nature. And the message is clear, writes Baher Kamal for IPS...
Article: We need biodiversity-based agriculture to solve the climate crisis
Regenerating the planet through biodiversity-based ecological processes has become a survival imperative for the human species and all beings. It is not...
News: Destruction of nature is as big a threat to humanity as climate change
We are destroying nature at an unprecedented rate, threatening the survival of a million species – and our own future, too. But it’s not too late to save...
News: Civil society demands action on biodiversity loss
The world is facing a biodiversity crisis, and leaders and delegates of the Convention on Biological Diversity must take real action to halt the...
Blog: COP fails to rise to the challenge of protecting biodiversity
The latest talks of the Convention on Biological Diversity in Cancun, Mexico, failed to address the systemic factors that threaten biodiversity, or the...
Article: Sharing a (not so) living planet
As the further evidence comes to light of how our economic systems are decimating the natural world, sharing is fast emerging as the central theme in the...
Printer-friendly version