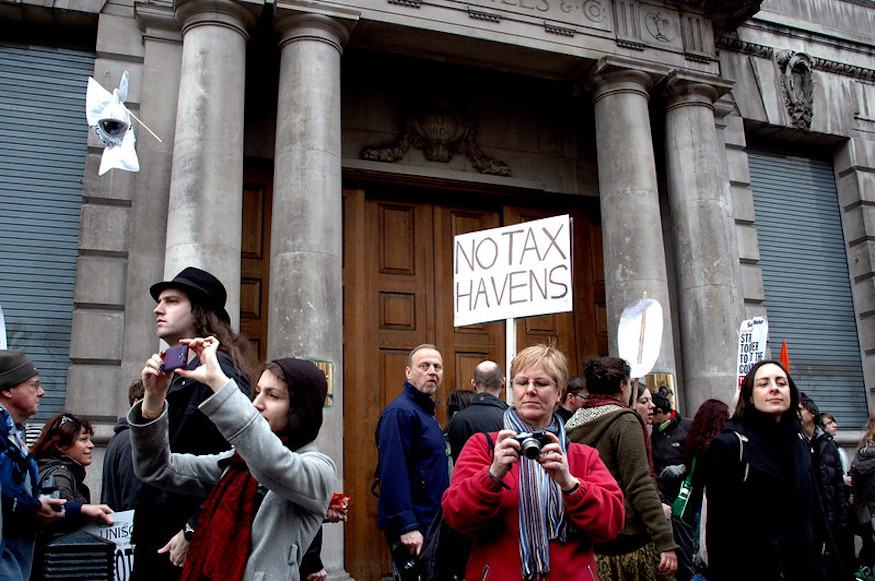 G7 negotiations for a global minimum corporate tax rate offers the opportunity for a transformational shift in responses to the pandemic, explains Alex Cobham of the Tax Justice Network.

When the chancellor, Rishi Sunak, welcomes the US treasury secretary, Janet Yellen, to the meeting of G7 finance ministersin London on Friday, those gathered around the table at Lancaster House will have the chance to strike the biggest blow against tax abuse in a century.

After decades of evidence that the international tax rules are unfit for purpose, the Biden administration has finally injected genuine ambition into efforts to prevent the super-profits of the world’s largest multinationals disappearing into tax havens. It’s a deal could deliver hundreds of billions of dollars in tax revenues to boost the pandemic response and recovery. But there is also a downside: the current OECD proposals would distribute those revenues in a manifestly unfair way. That would surely eradicate any remaining legitimacy the richest nations could claim for their privileged position of setting rules for the rest of the world.

To understand the significance of the moment, consider the historical context. In the 1920s and 30s, the League of Nations chose a path for the taxation of cross-border business that has persisted to the present day. But multinationals themselves have exploded in number and complexity since then, and tax abuse has in recent decades become a central part of their approach.

Where once these corporations were a more efficient form for international economic activity, now much of their advantages stem from being able to pay lower tax than domestic competitors. This is achieved by exploiting the archaic basis of tax rules in order to shift their profits away from the places where they make their money, and into jurisdictions such as the Netherlands or Cayman, which offer effective tax rates at or near zero.

Only 5% of the global profits of US multinationals were shifted around the world like this in the early 1990s. But over the following 20 years, that exploded to 30% and kept rising, with an estimated $1.4tn of profit shifted by the largest multinationals in the most recent high-quality data available (OECD data for 2016). That’s nearly 2% of world GDP that year, not far off sub-Saharan Africa’s total GDP.

The UK, with its dependent territories, is the biggest single actor, responsible for nearly a third of corporate tax abuse worldwide. Quite the qualification to be G7 chair at this crucial moment – but an opportunity for some redemption also.

Within the current process, coordinated by the OECD in Paris but dominated by the G7, the greatest potential for progress lies with the proposal for a global minimum corporate tax rate of 15%. For companies that continue to shift profits, governments could insist on their tax being “topped up” to the minimum rate.

But the distribution of those additional revenues is crucial. The OECD proposal privileges the headquarters countries of multinationals, which are typically the richest countries. The G7 – Canada, France, Germany, Italy, Japan, the UK and US – make up 45% of global GDP, although just 10% of the world’s population. They stand to gain more than 60% of the additional revenues. Lower-income countries lose a higher share of their tax revenues to corporate tax abuse, but would gain disproportionately little from a minimum tax enacted on this basis.

Campaigners including my organisation, the Tax Justice Network, are proposing a minimum effective tax rate (METR). This would take the same undertaxed profit currently shifted into low/no-tax jurisdictions, but apportion it simply to the places where the multinationals’ real economic activity – such as sales and employment – takes place, with no bias towards headquarters countries. In the METR system, those profits are taxed at the prevailing statutory rate in the country they’ve been apportioned to – which can be significantly higher than 15%. This would deliver additional revenues overall, and the distribution would be much fairer globally.

The sheer size of the potential revenue gains reflects the extent to which the largest multinationals have been able – and aggressively willing – to exploit current tax rules. The monopoly power of Amazon and others owes a great deal to the un-level playing field faced by smaller, tax-compliant competitors.

But the scale of revenues also offers the opportunity for a transformational shift in responses to the pandemic. The UK has cut its aid budget at the time of greatest global need, crying poverty. The G7 members are still arguing over whether or how much to fund international vaccination efforts. Delivering the minimum tax rate in a fairer way would more than cover the costs of the Covax initiative for lower-income countries. It would also boost their sovereign ability to fund their own public health systems – crucial to worldwide pandemic suppression.

It should never again be in the power of a few rich countries to decide whether the rest of the world is able to claw back revenues from the biggest tax abusers. In September, the UN can signal the start of negotiations on a tax convention that would create a globally inclusive, intergovernmental body to set rules in future. For now, the G7 should use its unequal power to deliver the fairest possible outcome. We’ll all be better off if it does.

Alex Cobham is an economist and chief executive of the Tax Justice Network.

Report: Poor pushed aside as corporates pocket pandemic funds in developing countries
Large corporations, rather than ordinary people, have been the main beneficiaries of Covid bailout funds in many lower-income countries.
Report: $427bn lost to tax havens every year: landmark study reveals countries’ losses and worst offenders
Countries are losing a total of over $427 billion in tax each year to international corporate tax abuse and private tax evasion, costing countries...
Blog: Convening world conference on tax evasion should be priority for next Secretary-General – UN expert
The newly selected UN Secretary-General António Guterres should convene a world conference on tax avoidance and evasion, the abolition of tax havens and...
Article: We could eliminate extreme global poverty if multinationals paid their taxes
If we recouped the annual global revenue losses due to multinational tax avoidance, we could literally eliminate extreme income poverty around the world,...
Printer-friendly version