A decade after the Lehman Brothers’ collapse, finance remains a major risk 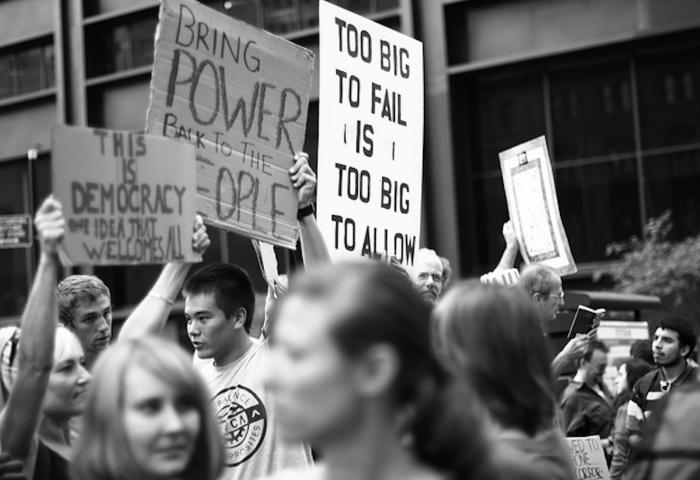 On 15 September, it will be ten years since the collapse of Lehman Brothers opened a Pandora’s Box. Movements across Europe are commemorating the date with acts of disobedience to relaunch our struggle to rebuild democracy, which can only be done by controlling finance, writes Susan George.

It is ten years since the fall of Lehman Brothers and the start of the financial crash; the greatest European crisis since the Second World War. Politicians from all sides, but especially the centre and centre-left of European politics, have written many serious texts and spoken many concerned words on the subject. Financial markets, we were promised, could no longer govern our societies.

And yet, ten years later, the whole thing could happen again tomorrow.

Finance remains a major risk for our economy. Still today, only a small fraction of our resources serve the ”real” economy that feeds, clothes and houses us. Still today, unreformed finance retains its wealth and power through the exploitation of our environment and our labour. Still today, the only answer to the devastating crisis caused by over-powerful finance is austerity: the poor pay for the crimes of the rich.

For four decades, the power of the financial sector has gained influence because, simply put, this type of economy has been a very effective way for the super-rich to take ever larger slices of the economic pie at the expense of the rest of us, the overwhelming majority.

In 1933, in the wake of the Great Depression, US President Roosevelt promised to drive the money changers from the temple. The US congress adopted a financial regulation called the Glass-Steagall Act, which broke up highly risky investment banking and from the high street retail banking which the rest of the economy uses and needs. They saw it as the only way to avert serious social catastrophe.

The law also set up safety measures like federal deposit schemes, and capped interest rates. The objective was to protect the deposits of ordinary savers and the loans of private individuals from the excessive risks taken by investment banks. Ordinary people were protected, the financiers were not allowed to speculate with our future and our money.

Glass-Steagall was repealed in 1999, the horrors of the Great Depression long forgotten under Bill Clinton’s administration. Without question, this repeal contributed to the 2008 financial crisis. Yet at the time, few noticed, let alone protested. Finance was king again, and there was little anyone else seemed able to do.

Faced with such an unequal economy, our democracy has been muted, and we were reduced (if we could find the time and could overcome the boredom) to passively watching bureaucratic parliamentary procedures and the day-to-day operations of liberal institutions. The concentration of financial power has transformed our democracy into a bland and powerless image of itself.

Today more and more people realise that the many crises our world faces are linked to the continuing power of finance and that our society is unable to any longer bear the cost of financial excess. Most people clearly see that economic growth is not limitless, that the question of climate change is a threat to our future, that the atrocious levels of inequality we face are incompatible with a peaceful and harmonious society.

They are right. But this knowledge alone doesn’t create change. In combination with a political system perceived as immune to change, it feeds fatalism or nihilism. Unless people can once again believe change is possible, the slide of Europe into disaster is inevitable.

Europe’s leaders have had their chance to change all of this. It is now obvious that a real and deeper form of democracy will not come from them. We have to create that for ourselves, together, from below. Of course, citizens around Europe have been mobilising themselves, from Occupy to the anti-tax evasion campaigns, to those campaign groups of citizen researchers exposing fraud and corruption in our institutions.

They have not feared brushes with the law – recognising rightly that civil disobedience is a legitimate resort in these very dangerous times, to start rebuilding a citizen-based power. They have used creativity, recognising the absurdity of a situation where the biggest multinationals in the world pay fewer taxes than their workers or their customers, despite looting the planet’s precious resources and creating products built to wear out in record-breaking time.

What is more appropriate than disobedience in a society in which laws are not the result of conscious deliberation between citizens but the demands of those who are anyway too powerful to be bound by them anyway?

On 15 September, it will be ten years since the collapse of Lehman Brothers opened a Pandora’s Box. Our movements, gathered under the banners of #10YearsOn and ChangeFinance, will commemorate the date with acts of disobedience around Europe to relaunch our struggle to rebuild democracy, which can only be done by controlling finance. For anyone frightened by the rise of the far right, of intolerance, or hatred, this is the best chance we have. We must use the next decade to bring finance under popular control.

Susan George is a writer, political scientist and activist. She is the founder of Attac - a major part of the anti-globalisation movement which has campaigned for financial reform for 20 years.

Article: Warnings of a new global financial crisis
There are increasing warnings of an imminent new financial crisis, not only from the billionaire investor George Soros, but also from eminent economists...
Report: The sharing economy: Inaugurating an age of the heart
The true sharing economy represents the end of the old ways defined by the pursuit of profit and competitive self-interest, while a new age of...
Article: Reclaiming the UN's radical vision of global economic justice
The Universal Declaration of Human Rights is one of the most translated and celebrated documents in the world, marking its 70th anniversary this year. But...
Article: Squeezing the state: Corporate influence over tax policy and the repercussions for national and global inequality
Reducing inequality is one of the central pledges of the SDGs, appearing as a stand-alone goal (SDG 10) and as a cross-cutting commitment to “leave no one...
Printer-friendly version