Editorial: Glimmers of hope for a ‘fair shares society’ 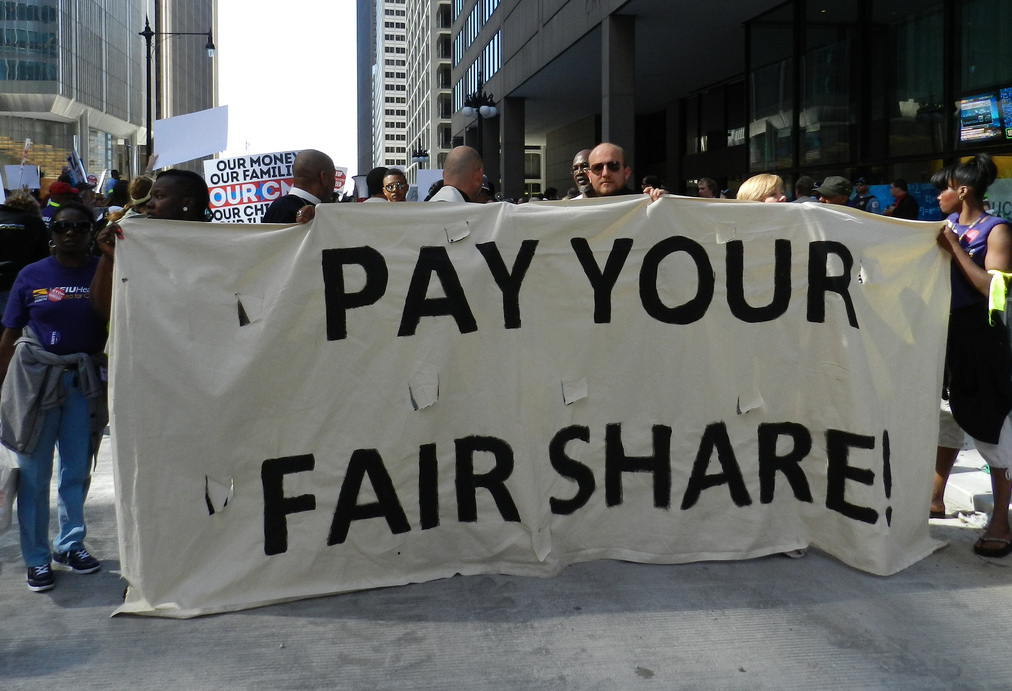 As part of STWR’s ‘global call for sharing’ campaign, we are periodically highlighting the growing public debate on the need for wealth, power and resources to be shared more equitably both within countries and internationally. This debate is becoming more prominent by the day, although it is often framed in an implicit context without directly acknowledging how the principle of sharing is central to resolving today’s interlocking crises.

In this light, the editorial below illustrates some of the many and diverse ways in which a call for sharing is being expressed, whether it’s by politicians, economists, campaigners, activists, academics or anyone else. To learn more about STWR’s campaign, please visit: www.sharing.org/global-call

Last month the reality of extreme global inequality was again a presiding theme of high-level discussion, not least at Davos where the world’s richest and most powerful get together “to convince themselves they are the good guys”. Remarkably, the World Economic Forum founder urged delegates that the motto for their 2015 meeting should be ‘sharing and caring’. But as STWR pointed out in a blog post, the solutions to global inequality are unlikely to come from the business elites that are in large measure responsible for creating it. Oxfam’s latest research on the growing wealth gap made global news headlines once again, based on a briefing paper that argued how the billions spent on corporate lobbying is increasingly moving society away from the direction of economic sharing and redistribution on behalf of the common good.

So from the very start of the year, the need to tackle inequality through policies that can share wealth more equitably is central to even mainstream debate – and will inevitably remain so in the midst of ongoing austerity measures, wage cuts and high unemployment in many high-income as well as low-income countries.

It is interesting to observe how the focus on inequality is shaping political attitudes in rich nations like the United States, especially following Obama’s State of the Union address that emphasised social mobility and the need to ‘spread the wealth’ more evenly. His proposed tax redistribution measures – dubbed the ‘Robin Hood plan’ and widely considered a “pipe dream” by Republicans – were at least centered on the need to bolster social programs that benefit lower- and middle-income Americans, paid for with tax increases on the wealthiest taxpayers, corporations and financial firms. As a hopeful sign of the times, Obama is apparently trying to reframe the debate over what government can do to limit inequality – focusing on real solutions rather than sterile arguments about economic growth versus equity.

As the UK gears up for its general election in May, bellicose discussions about equality, fairness, taxation and redistribution are also front and centre of political debate. A coalition of NGOs recently launched a campaign for a new law called the Tax Dodging Bill [see STWR blog], premised on the need for a just tax system that shares its wealth and resources fairly among the population. Campaigners highlight the need for big corporations to pay their ‘fair share’ of taxes, both at home and abroad, and call for the next UK government to take definitive steps to crack down on tax dodging within the first hundred days of taking office.

Almost every British politician is now compelled to acknowledge the need for tax justice in one way or another, especially in light of the firestorm over HSBC's complicity with international tax evasion. Indeed, one member of parliament has even called for a “fair shares society” in which businesses “share the wealth they minted”. Wading into the debate earlier last month, the Church of England has also spoken out in trenchant terms about the extreme inequality that defines modern Britain, arguing that moral principles and sharing should underpin the foundations of society [see STWR blog].

Occupy Democracy are also stepping up their activities at Parliament Square outside Westminster prior to the election, with a provisional set of demands that broadly encapsulate the need for a more equitable sharing of wealth, political power and resources across society as a whole – such as by closing down tax havens, reversing the privatisation of public services, abolishing university tuition fees, and instituting a universal basic income. The latter policy proposal has reinvigorated popular discourse in the UK over how society’s resources should be shared for the benefit of everyone, mainly in light of the resurgent Green Party’s plans to implement the measure for every adult in or out of work. Although many notable progressive analysts disagree with the proposal as a way to share work and incomes, some – like Paul Mason – argue that its logic could pose "a radical challenge to market economics" and help forge "a pathway to a different kind of economy".

At the European level, much has happened since Syriza’s rise to power to ignite debate over what it means to live in a sharing society. As Paul Mason again writes in an incisive blog about Europe’s new populist left movement: "...if you think about it, all Podemos and Syriza are really trying to do is bring the Scandinavian model to the Aegean and the Med. ...But here’s the problem: in a neoliberal world, even the basic welfare state can look revolutionary. Most projections for the survival of free-market capitalism involve the creation of greater inequality, a smaller state sector and a lower-paid workforce."

It’s unclear as yet whether Syriza’s victory will spell the coming of a European Democratic Spring or the end of austerity, but there’s no doubt that progressive policies that reflect the principle of sharing are at least being seriously considered and discussed. There’s even the odd glimmer of hope that some policies are headed the right way, as with calls for cancelling Greece’s debt or Croatia’s plans to write-off the debts of 60,000 poor citizens. Plans for taxing the financial sector to generate public money for European countries – an EU-wide Robin Hood Tax – are also “still kicking”, according to The Economist.

Of course, government priorities and policies are generally headed far from the trajectory of global systemic change and economic sharing, as summed up in the concept of the ‘market-state’ which is outlined in a recent article by STWR. Now more than ever, it is essential that ordinary citizens join hands with campaign groups and activists who are working to democratise our governance systems from the top down as well as the bottom up. And there is every indication that this is happening more and more, not least with the recent civil society mobilisation in Brussels against TTIP – the so-called ‘Trojan treaty’ that threatens democracy and puts corporate profits before people’s needs.

The above is just a snapshot of recent signs and trends that illustrate how the principle of sharing is increasingly being viewed as a solution to unjust power dynamics or inequitable wealth distribution. Much more could be mentioned, especially in terms of the environmental movement, new economy initiatives and the renewed concept of the commons – much more of which we will aim to highlight in future editorials. See in particular a recent interview by the P2P Foundation, which outlines STWR’s basic perspective about the ethic and practice of sharing in relation to commoning and peer-to-peer production.

For regular sharing-related links of the above nature you can visit STWR’s twitter and facebook pages, as well as a new scoop.it! page on ‘what we’re reading’. And if you see that we’ve missed anything pertinent (due to our limited time to monitor the news media and progressive websites), please drop us a line at info@stwr.org. You can also sign up to our newsletter on the homepage if you’d like to receive regular updates in your email inbox about what we’re doing at STWR.

Blog: The Tax Dodging Bill: it’s time for big corporations to pay their fair share
This week, a coalition of NGOs have launched a campaign for a new law in the UK that could make sure that corporations pay their fair share of taxes to...
Blog: A world of ‘sharing and caring’ won’t begin in Davos
At this year’s gathering of the world’s richest and most powerful at Davos, the World Economic Forum founder has urged delegates that the motto for their...
Article: Leading Churchmen in Britain call for a more equal and sharing society
The Church of England has spoken out in trenchant terms about the extreme inequality that defines modern Britain, arguing today that moral principles and...
Article: Commons transition: STWR interviewed by the P2P Foundation
As part of a series of interviews highlighting the need for a 'commons transition', STWR's Rajesh Makwana was asked about the ethic and practice of...
Article: The rising global movement that calls for #noTTIP
TTIP is the latest bid to capture policymaking by the profit-making interests of the 1%, with dire implications for anyone who upholds a vision of a more...
Printer-friendly version