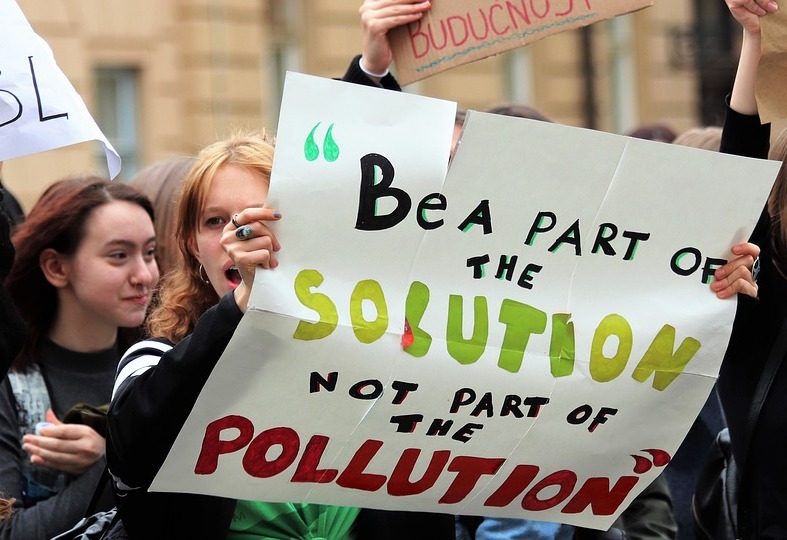 Every day at work we all contribute to a system that is burning us alive. Downing tools on 27 September will help change it, writes McEver Dugan and Evan Cholerton from Earth Strike.

Climate change is hurling humanity towards disaster. There is no more room to question the science, when nearly every climate scientist is in agreement that the implications of a global rise in average temperature will spell drastic changes for human civilisation. In the face of such a rapidly encroaching threat, political niceties and traditional incrementalism and compromise cannot come close to the level of change and upheaval required to solve, or even mitigate, the problem of global climate change.

Climate scientists continue to stress the importance of lowering carbon emissions significantly, yet they are currently increasing at an accelerating rate. A 2018 UN study found that unless promised emission reductions under the Paris agreement were tripled, they would cause the global temperature increase to reach 3C by 2100 and continue to rise after that. Meanwhile, some of the most influential people in the world continue to deny the very existence of climate change. Even as the relatively tame 2018 IPCC reportstates that we must cut our emissions in half within the next decade, people are feeling that their elected leaders, and mainstream political avenues as a whole, cannot measure up to this task.

The current ineptitude and impotency of the ruling class is unacceptable when the consequences of inaction are so far-reaching. More than ever, it is time for workers – those who will be hardest hit by soaring food and healthcare costs, and by property destruction caused by natural disasters and the rising sea – to exert their power and force the hand of major players (governments and corporations) to avert what is almost certain to be the next global mass extinction.

As such, climate activism of all types is blossoming. Greta Thunberg’s school strikes led to one of the largest global climate demonstrations in history. Extinction Rebellion has shut down major intersections in London and held events around the world. The Sunrise Movement caught the attention of the US when children in San Francisco confronted the Democratic senator Dianne Feinstein over her climate policy. Indigenous groups across the globe have been fighting tooth and nail against resource development on their ancestral lands. And Earth Strike is preparing for a global general strike on 27 September 2019.

Through all of this, as Greta Thunberg has said, one thing must be made clear. There is no greater way to capture the attention of the public, and the powers that be, than a general labour strike. An old and effective strategy, it is the holy grail of activism. And in such dire times, there is no question that a general strike is sorely needed once more. Earth Strike is seeking to revive the general strike in service of a global, apocalyptic problem – one that encompasses the lives of every creature on the face of this planet.

The reason Earth Strike exists is that shutting off the global labour supply will force governments and industry giants to listen. There’s no way to avoid the conversation when profits are in danger of eroding, and production has stalled to a halt. Every day we go into work and spend our time and labour building a system that is burning us alive. The top polluters in the world are directly dependent on this effort. It is time to withhold it.

Some will inevitably argue that labour action is too disruptive, and too messy, but that’s the very point. The system causing this crisis needs to be disrupted. A general strike is an exceptionally powerful tool with a long history of gaining concession. In Iceland in 1975, a women’s general strike was instrumental in guaranteeing equal pay; and in India earlier this year, a general strike by between 150m and 200m workers illuminated the injustices inflicted on them by Narendra Modi’s Bharatiya Janata party. We simply don’t have the time to forge a new tool from scratch.

In fact, the opposite reaction is more likely. 27 September is only the first strike, and sympathisers all over the globe are bound to take notice. To those who do not feel like they have the power alone, organise. Unions and workers must work together in solidarity. The growing number of participants in this general strike, numbering in the tens of thousands, are already talking about what will come next. For whatever comes, we will fight, and strike, together.

News: Global Climate Change rallies push for urgent action
In London, STWR joined over 10,000 campaigners who braved the wind and December downpours to walk from the Houses of Parliament to the US embassy.
Report: The intersection of politics and spirituality in addressing the climate crisis
The following interview with STWR’s founder, Mohammed Sofiane Mesbahi, examines both the contemporary political and profounder spiritual implications of...
Report: A radically realistic climate vision
Limiting global temperatures to 1.5°C above pre-industrial levels is the only way to achieve social justice while protecting our environment from...
Blog: Greta Thunberg’s speech to UN secretary general António Guterres
In a speech given at the UN Climate Change Conference in Poland (COP24), 15-year-old Greta Thunberg cuts to the heart of the challenge and calls for the...
Printer-friendly version