Human rights and the global protests: Addressing systems as well as symptoms 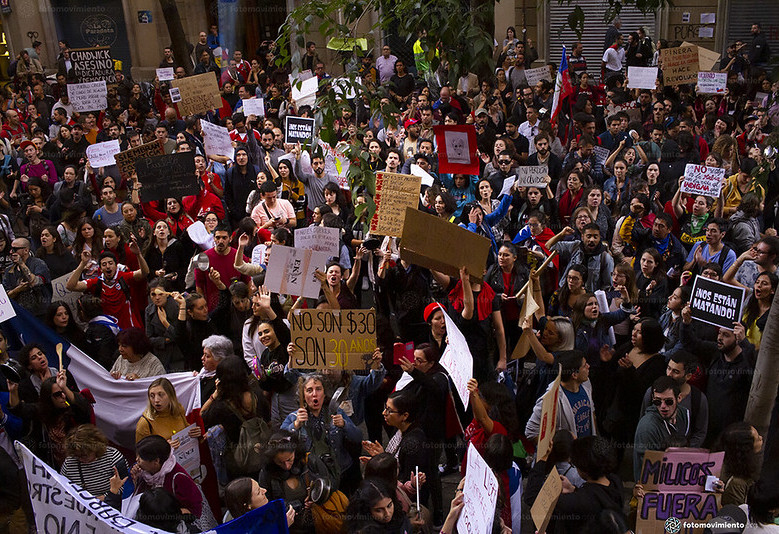 Human rights advocates should be as concerned with the economic injustices giving rise to recent worldwide demonstrations, as with the repressive responses to them writes Ignacio Saiz for the Centre for Economic and Social Rights.

In recent weeks, an extraordinary wave of mass protests has swept the globe. While their specific causes and contexts vary, many can be seen as part of a worldwide revolt against extreme inequality and the unjust economic and political systems driving it.  A common weave running through many of the protests is widespread indignation against austerity– the package of debt-reduction policies that scores of governments are now implementing.

In Ecuador, indigenous-led protests compelled the government to reconsider an austerity package agreed with the International Monetary Fund (IMF) that included public sector wage cuts and fuel price hikes. Chile has seen million-strong protests against low wages, costly social services and the most extreme levels of economic inequality of any OECD country. In Lebanon, a third of the population is estimated to have taken to the streets since the latest round of austerity; while Iraq has been rocked by mass protests against high unemployment, ailing public services and economic mismanagement.  These events follow large-scale demonstrations earlier this year against austerity in countries including Argentina, Honduras, Egypt, Sudan and Zimbabwe.

Many of the protests have been triggered by a specific fiscal measure–a tax on messaging apps in Lebanon or an increase in Santiago metro fares–perceived as emblematic of attempts by governing elites to foist the burden of national belt-tightening on ordinary working people and the already disadvantaged. But what has often begun as a spontaneous stand against fiscal injustice has burgeoned into a mass mobilization against the structural inequities underpinning it: political systems seen as corrupt, captured and unaccountable, and economic systems seen as generating inequality by privileging private profit over the public good. Demonstrations in Chile and Lebanon, for example, have continued far beyond the repeal of the offending measures or even the resignation of senior government figures, insisting on a more fundamental economic and political overhaul.

Another alarmingly common feature has been the repressive response of the authorities, who in most cases have addressed the protests as a threat to public security rather than a clamor for social justice. From Quito to Cairo and from Santiago to Baghdad, security forces stand accused of excessive use of force, killings, ill-treatment and arbitrary arrest of demonstrators.  It is somewhat understandable, then, that where prominent international human rights actors have spoken up about these protests, it has largely been with respect to these abuses. The Office of the High Commissioner for Human Rights, for example, has sent a team to Chile to investigate breaches of international standards related to the use of force by security personnel. A recently-concluded Inter-American Commission on Human Rights mission has gathered numerous testimonies of similar alleged abuses in Ecuador. Amnesty International and Human Rights Watch have done important work documenting excessive force against protestors in Baghdad, Beirut and elsewhere. Abuses by the security forces have also been the primary if not sole focus of investigations by national human rights institutions such as the Instituto Nacional de Derechos Humanos in Chile or the Ecuadorian Defensoría del Pueblo.

Each of these organizations has, to different degrees, acknowledged that the protestors’ socio-economic grievances are also human rights concerns. But the economic and social rights dimensions of these crises have generally been relegated to the background and are yet to meaningfully inform their analysis and recommendations.

While the acute repression of civil and political rights in the wake of these protests clearly merits urgent scrutiny, the chronic denial of social and economic rights motivating them must also be addressed as a central human rights concern. International human rights standards apply equally to governments’ use of fiscal policy as to their use of force.  Where austerity policies result in widening gender or racial disparities, push people into poverty or lead to avoidable backsliding in access to health or housing, they also breach international legal obligations on economic, social and cultural rights.  To relegate these violations to the margins of human rights concerns serves only to perpetuate the lack of accountability that has brought millions out on the streets.

The mass mobilizations against extreme inequality, like those against the closely-related crisis of climate change, beg a holistic approach to the human rights claims underpinning them. They should also prompt human rights actors to rethink their traditional agnosticism with regard to economic systems, and adopt a more frontal critique of neoliberal economic orthodoxy. The protests demand that we call out the ravages of neoliberalism as human rights deprivations, challenge the fallacies sustaining this ideology and envision rights-centered alternatives.

Recent developments have consolidated the normative and methodological foundations for such a critique. For example, earlier this year the UN Human Rights Council adopted Guiding Principles for Human Rights Impact Assessments for Economic Reform Policies, which set out the human rights standards that should anchor economic policymaking, including fiscal adjustment. These are informed by the practical experience of civil society organizations such as CESR in assessing austerity and its human rights impacts in numerous countries, as well the work of progressive economists bringing a human rights lens to challenge dominant economic paradigms. Such efforts have focused on fiscal policy as a critical entry point for addressing structural injustice, as reducing inequality and fulfilling human rights are simply not possible without a radical redistribution of resources, wealth and power.

Systemic approaches to economic and social rights accountability are also targeting the responsibilities of international financial institutions and corporate actors in maintaining the unjust economic status quo. CESR’s efforts have been aimed at the IMF, whose complicity in prescribing austerity has fanned the flames of crises in many of the countries where protests have erupted.  For example, just last month the IMF pressed Lebanon to apply even more regressive adjustment measures, minimizing concerns about the potential for social tensions. Ongoing initiatives to codify the binding human rights obligations of business actors and overhaul the rules of international corporate taxation are equally critical fronts for systemically hard-wiring corporate accountability.

Of course, a truly “eco-systemic” human rights practice needs to go beyond normative elaboration and international policy reform. A challenge for those working internationally is to build stronger links between norm development, policy critique, context-specific advocacy and movement building, supporting the efforts of national human rights activists who are drawing attention to the structural and social rights dimensions of the crises.

We can likely expect more protests of this kind in 2020, as fiscal contraction spikes, the global economy slackens, and traditional spaces for civic engagement shrink. There is a clear message emerging from the streets that human rights actors should get behind: there can be no democracy without economic and social justice. For this reason, any durable resolution to the current unrest must have economic and social rights accountability at its core.

Report: Heralding Article 25: A people's strategy for world transformation
After so many years of political inaction only the massed goodwill of ordinary people can bring about an end to poverty in a world of plenty through...
News: Join us on demonstrations for Article 25
In the UK, our campaign group Share The World’s Resources (STWR) is participating in demonstrations for economic and social justice by highlighting the...
Blog: Why aren’t Americans rising up like we are seeing across the planet?
The waves of protests breaking out in country after country around the world beg the question: Why aren’t Americans rising up in peaceful protest like our...
Blog: This wave of global protest is being led by the children of the financial crash
We are witnessing the biggest surge in global protest activity since the early 2010s, when a "movement of the squares" saw mass rallies in capital cities...
Printer-friendly version