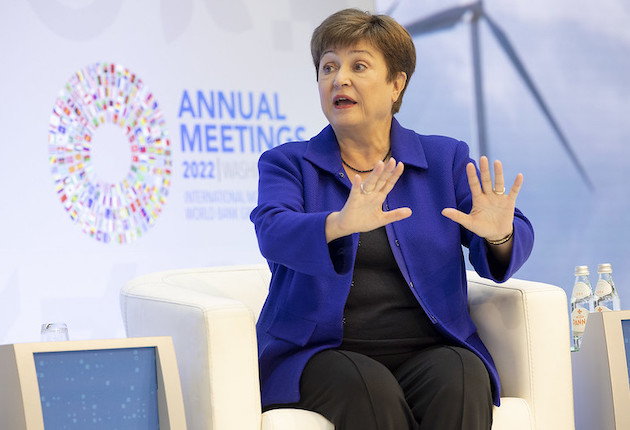 As the world's most powerful central banks—led by the U.S. Federal Reserve—drive poor nations into deeper economic crises by aggressively hiking interest rates, a coalition of 140 organizations from across the globe urge the International Monetary Fund to provide immediate financial relief to low-income nations reeling from the intertwined emergencies of climate change, Covid-19, war, and soaring costs of living. By Jake Johnson for Common Dreams.

In a letter sent ahead of the IMF's annual gathering in Washington, D.C. next week, the organizations specifically urged the U.N. agency's leadership to support a "major new general issuance of at least $650 billion worth of debt-free Special Drawing Rights," an international reserve asset that can be exchanged for dollars and other currencies.

"The great majority of the world's countries are struggling amid multiple historic, overlapping, and generally worsening crises," the letter reads. "The world's wealthiest countries must act quickly to assist them by voting for a major new issuance of SDRs. As Pakistan's central bank governor recently wrote, if rich countries do not act soon, 'Poor countries will not easily forget how they were let down by a system that was meant to increase their living standards and protect them in an emergency.'"

"The enormity of these overlapping crises may be unprecedented in human history," the letter adds, pointing to growing hunger and poverty across the globe that has "fueled instability in many countries, even leading to the toppling of governments."

The coalition, which includes U.S.-based groups such as the AFL-CIO and the Center for Economic and Policy Research as well as organizations based in developing nations, argued that a new allocation of SDRs—which cost IMF member governments nothing to issue—would be "the most direct and efficient response to assist countries around the world in responding to these new crises, and to shocks yet to come."

"A new allocation of at least $650 billion," the letter noted, "would immediately make hundreds of billions of dollars available to nearly all low- and middle-income IMF member countries without debt or conditions and only requires political will on the part of the Fund's board; particularly those members, like the U.S., Japan, China, Germany, and France, that have the largest voting shares at the IMF."

The call came amid mounting fears of a punishing global recession spurred by central banks' synchronous interest rate increases, which are having major ripple effects worldwide.

In an extraordinary step earlier this week, the U.N. called on the Fed and other central banks to stop raising rates, warning that "the current course of action is hurting the most vulnerable, especially in developing countries, and risks tipping the world into a global recession."

Kristalina Georgieva, managing director of the IMF, similarly cautioned in a speech Thursday that "the risks of recession are rising."

"Overall, we expect a global output loss of about $4 trillion between now and 2026," Georgieva added. "This is the size of the German economy—a massive setback for the world economy. And it is more likely to get worse than to get better."

Reuters reported last week that "many past emerging market crises were linked to dollar strength and rising U.S. interest rates, forcing developing countries into tighter monetary policy to shore up their own currencies and fend off inflation pressures, pushing up costs of servicing dollar-denominated debt."

"Some of the world's poorest nations expect debt service payments to rise to $69 billion by 2024—the highest level in the current decade," the outlet added.

Despite the pain facing many poor countries as a direct result of U.S. monetary policy, the Biden administration has thus far refused to use all the tools at its disposal to provide relief. As The American Prospect's Lee Harris wrote Tuesday, "Congress looks unlikely to authorize sending SDRs to poorer countries, and the Treasury is resisting calls to provide emergency liquidity."

One unnamed official from the U.S. Treasury Department told the Prospectthat "just pouring unconditional money at this point is not going to help most countries, with the exception of those who are clearly suffering from food insecurity and need to get that money right away."

For months progressive lawmakers in the U.S. have been pushing the Biden administration to back the issuance of at least $650 billion in SDRs, a move that would build on the IMF's critical SDR allocation last year as the coronavirus pandemic wreaked havoc.

In a July letter, Rep. Pramila Jayapal (D-Wash.), Sen. Elizabeth Warren (D-Mass.), and dozens of other lawmakers wrote that "developing countries, and the billions of people who inhabit them, are facing unprecedented challenges and need financial support now."

Echoing the message of the 140 groups behind Thursday's letter, the lawmakers argued that a large issuance of SDRs would "immediately provide fresh financial resources to help developing economies to meet their critical public health needs, mitigate the humanitarian impact of skyrocketing global food and energy prices, reduce their debt burdens, and respond to and recover from the combined, ongoing crises."

Article: Global Week of Action for Justice and Debt Cancellation
As the IMF and the World Bank will hold their annual meetings, activists are raising demands to #CancelTheDebt. Read below the civil society open letter...
Report: Adding fuel to fire: How IMF demands for austerity will drive up inequality worldwide
A new briefing paper by Oxfam shows that the International Monetary Fund is systematically encouraging countries to adopt austerity measures once the...
Blog: How the Treasury Department could prevent mass starvation with no cost to the taxpayers
As hunger threatens millions, the Biden administration should give its OK for the IMF to distribute financial backing to the world’s poorest countries. By...
Report: In the midst of the pandemic, why is the IMF still pushing austerity on the Global South?
Despite its own warnings, the International Monetary Fund is risking another ‘lost decade’ for development, reports Soren Ambrose for openDemocracy.
Report: Financing the global sharing economy, part three (7): redistributing IMF resources
This section of the report Financing the Global Sharing Economy makes the case for redistributing the IMF's assets through its Special Drawing Rights...
Printer-friendly version