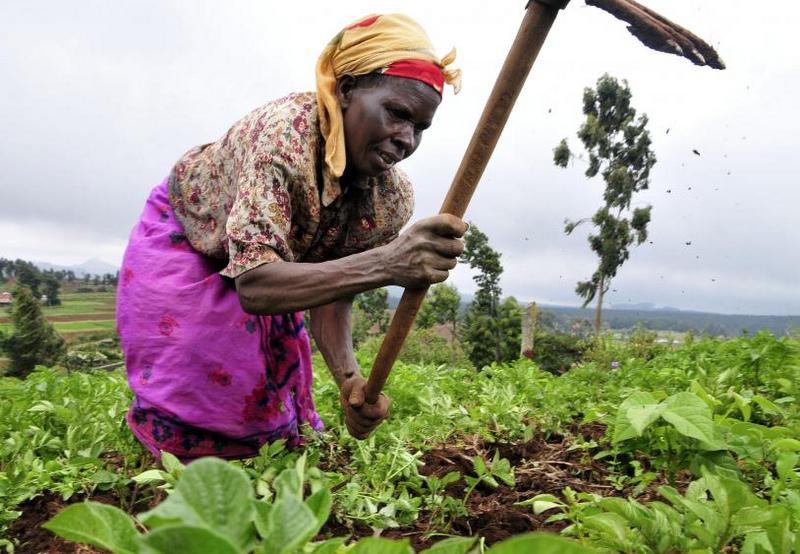 The Alliance for a Green Revolution in Africa is repeating the failed policies of the past and risks pushing back further the struggle against hunger and malnutrition, explains Timothy Wise for IATP.

It’s been nearly fifty years since Frances Moore Lappé reminded us in her seminal work, “Diet for a Small Planet,” that hunger is not caused by a scarcity of food, it is caused by a scarcity of power. Economist Amartya Sen won a Nobel Prize more than twenty years ago for showing that famine was rarely caused by a lack of food. Yet here in 2020, with the world well aware of the twin dangers of hunger and malnutrition, there was Agnes Kalibata, the leader of the Alliance for a Green Revolution in Africa (AGRA), telling an online audience that poor, hungry countries can’t think about diet diversity, “it’s a luxury.”

The comments earned a sharp response from Jomo Kwame Sundaram, the Malaysian economist whose most recent post was assistant director general at the U.N. Food and Agriculture Organization (FAO). “A popular and persistent misconception is that it is necessary to first overcome dietary energy undernourishment before addressing malnutrition,” he wrote in his column for InterPress Service.

What clearly set Sundaram off was that he’d recently read our report, “False Promises: The Alliance for a Green Revolution in Africa,” which showed AGRA to be a billion-dollar initiative that is reducing crop diversity in the name of calorie production. But that production is not reducing hunger. It has contributed to a 31% increase in the number of undernourished people in its 13 target countries. And Rwanda, oft cited as an AGRA success story during Kalibata’s term as agriculture minister, showed a 41% increase in the number of undernourished people since AGRA began in 2006, according to the latest U.N. figures.

There is a real danger that this wrongheaded approach will dominate a planned World Food Systems Summit next year, which Kalibata has been named to lead. “It is crucial that the 2021 U.N. Food Systems Summit ensures that food systems do not leave anyone behind in the ongoing struggle against malnutrition,” Sundaram argues. “This could happen if micronutrient deficiencies and other health problems are ignored in singular pursuit of increasing caloric output, which may not even reduce hunger, as in Rwanda.”

I’ve referred to AGRA and related Green Revolution practices as the failed policies of the past because they seem oblivious to the very checkered track record of the first Green Revolution in India and other countries. And because, as Sundaram points out, the idea that producing more calories will alleviate hunger is a long-discredited notion. The U.N. and other international development experts have long recognized the “hidden hunger” of nutrient deficiencies that result from unbalanced diets.

As food studies scholar Marion Nestle notes, for nutrition “the critical point is food variety,” not just calories and protein.

That is why it was a surprise to hear Kalibata, in a July 21 webinar hosted by the International Institute for Sustainable Development and the CERES 2030 project, revert to an argument her home country so clearly disproved. Her comments came after farm leader Esther Penunia spoke eloquently about the dangers COVID-19 posed for food security in rural communities. Penunia called on governments to support small-scale farmers in growing a diverse range of crops to nourish their soils and communities in the face of broken supply chains and declining work opportunities.

Cue Kalibata, who was Rwanda’s minister of agriculture from 2008 to 2014 before being named to head the Gates Foundation-funded AGRA. “When we started doing work in Rwanda, trying to move our country from starvation to food security, I found that we were at 1,700 calories per day,” well below the FAO’s minimum per capita recommendation of 2,100 calories, she noted. “At that moment all you care about is that people have enough calories, all you care about is that people have food on their table. Once you get there – Rwanda is now at 2,700 calories per capita – once you get there then you have the luxury to worry about, ‘Do I need meat? Do I need milk?’ or whatever.”

Just two weeks earlier, our report had documented just how wrong Kalibata was. Under her leadership, Rwanda had quadrupled maize production with a mix of carrots – subsidies for maize seeds and fertilizers – and sticks – fines for farmers who continued to plant some of their traditional sorghum and sweet potato. Crop diversity has declined with those incentives to produce maize. All that maize may have lifted Rwanda’s per capita calorie production above FAO minimums, but it sure didn’t solve hunger, which, as always, is still a problem of distribution and consumption. According to new FAO data released July 13, the number of undernourished Rwandans has increased 41% since 2006. The share of Rwandans living in extreme poverty has barely declined, from 63% to 60%.

But Rwanda may well illustrate the shortcomings of a program that has spent so much to achieve so little. In its 13 focus countries, AGRA has spent one billion dollars, supplemented by up to one billion dollars per year in African government subsidies for its Green Revolution seeds and fertilizers. Yet in 12 years AGRA shows tepid productivity growth, even for maize, its most favored crop. Production of millet has declined 24% with falling yields. We calculated that for a basket of staple crops, yields had grown just 18% over 12 years, nothing resembling AGRA’s promised doubling of productivity by 2020. Meanwhile, the number of undernourished people in AGRA countries rose 31%. 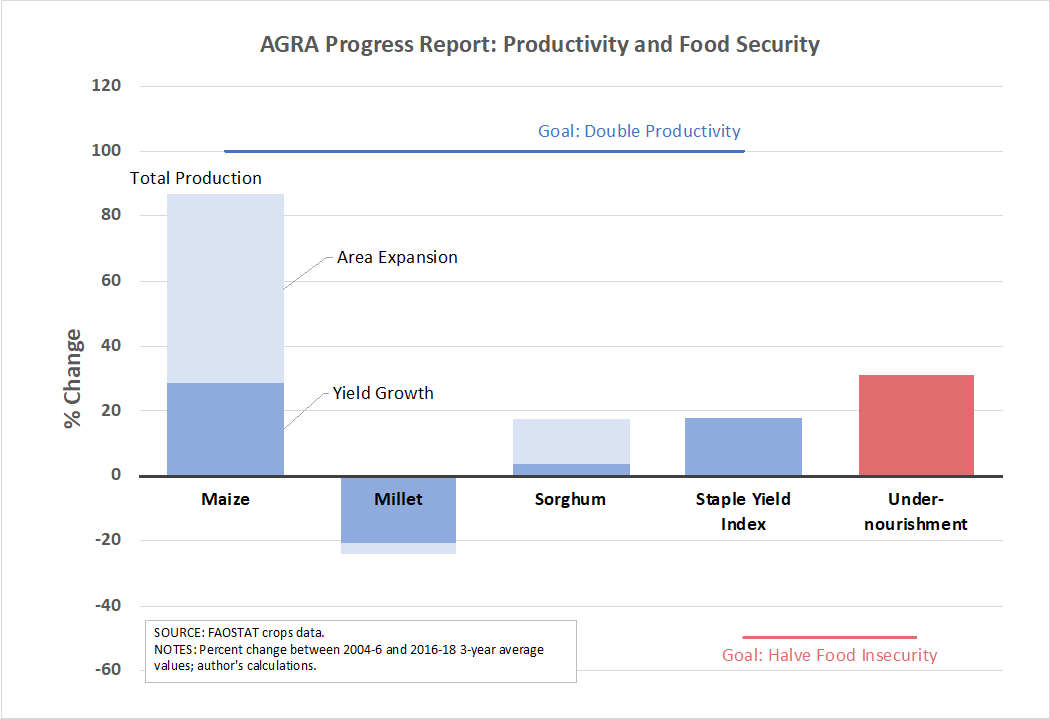 Getting it all wrong

AGRA's model of agricultural development is premised on a strong set of assumptions:

Our study shows that none of those assumptions are valid.

Adoption rates for seeds and fertilizers are low, even with African governments providing subsidies for their purchase. Farmers are seeing small productivity increases and only for favored crops such as maize. Those increases do not generate much more income; the notion that farmers can double their incomes by selling their new surpluses of maize ignores the high costs of inputs and the low prices in local markets at harvest time. Weak productivity growth means there is not much more food for farming families. In some cases, nutrition decreases because AGRA promotes a reduction in crop diversity, leaving farmers with more starchy products like maize but less of their traditional food crops, such as millet or sweet potatoes. And soil fertility declines over time if land is planted in monocultures of maize year after year fed by AGRA’s synthetic fertilizer.

Worse still, farmers can find themselves mired in debt. As case study researchers for the “False Promises” report in Tanzania and Kenya found, Green Revolution inputs were provided on credit. When harvests were poor, farmers had no cash to pay back their loans. Depending on expensive inputs carries high risks for small-scale farmers, which is one reason they are wary of adopting the Green Revolution technology package.

Again, this should come as no surprise. These are the failed policies of the past, as Indian leaders Vandana Shiva and Devinder Sharma reminded us during a recent panel discussion on the failing Green Revolution in Africa. Since its Green Revolution fifty years ago, India has chronicled a range of social and environmental destruction in the countryside, with indebted farmers taking their own lives.

Former FAO economists Sundaram clearly thinks we are repeating those mistakes now in Africa. “Green Revolution programs have undermined sustainable crop diversity supportive of dietary diversity… Sustainable farming should instead promote nutritious, affordable diets for all, especially for the world’s half-billion small-scale farmers who, along with their families, comprise many of the world’s hungry.”

News: Do not confuse food charity with ‘right to food’, UN expert tells Italians, labelling food system exploitative
A sophisticated Italian food system is placing a heavy burden on Italy’s workers and farmers, an independent UN human rights expert has concluded,...
Article: We need biodiversity-based agriculture to solve the climate crisis
Regenerating the planet through biodiversity-based ecological processes has become a survival imperative for the human species and all beings. It is not...
Blog: World hunger is on the rise
The world already grows more than enough food to feed the world population. Why then do we keep getting it so wrong, acting like growing more commodity...
Article: Global Peasant Declaration represents huge advance for human rights
Seventy percent of the world’s population is fed by small-scale producers. These producers, however, face an onslaught of threats related to economic ...
Printer-friendly version