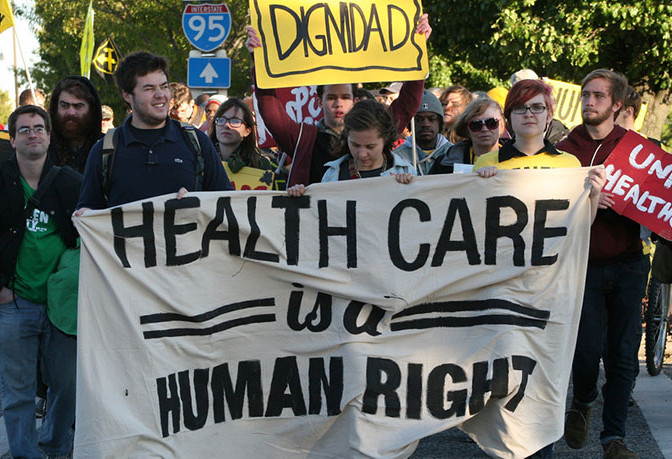 Social protection is a universal human right, and governments have the tools at their disposal to end hunger and poverty sustainably. Yet the majority of humanity remain unprotected, explain Jomo Kwame Sundaram and Anis Chowdhury for the Inter Press Service.

Historically, most social security systems have developed in the formal sector of rich economies. However, most of the poor and hungry in the world live in rural areas, surviving in the informal economy.

Meanwhile, the world economy continues to struggle to recover following the 2008 financial crisis. Prospects remained bleak as many governments pursued fiscal austerity in the face of perceived financial market pressures.

Most developing countries continue to experience high underemployment, even if official unemployment rates remain low. With low commodity prices and escalating trade tensions, things are likely to get worse in the medium term.

Even if long-term growth really lifts all boats, which there is no evidence for, it cannot eliminate hunger and poverty by 2030, especially as inequality mutes the impact of growth on poverty reduction. The struggle to escape poverty is slowed as growth is not inclusive.

Many non-poor households remain vulnerable to poverty as they face various shocks which cause them to fall into poverty. Such shocks typically have long-lasting negative impacts on the poor. However, with the requisite political commitment and fiscal resources, poverty and hunger can be reduced quickly with well-designed social protection.

The United Nations 2030 Agenda for Sustainable Development Goals (SDGs) commits countries to “implement nationally appropriate social protection systems and measures for all, including floors, and by 2030 achieve substantial coverage of the poor and the vulnerable”.

Social protection should involve policies and programmes designed to reduce and prevent poverty and vulnerability. World Bank estimates suggest that social protection prevented 150 million people worldwide from falling into poverty in 2010, albeit unevenly.

Social protection can also enable investments by beneficiaries to enhance their own productive capacities, earned incomes, consumption, health, education, and wellbeing. Contrary to widespread popular prejudices, it does not reduce adult work effort and incomes, enabling children to work less, and to attend school instead.

It also helps poor households better manage risk, reducing reliance on, and vulnerability to usury, clientelism and other exploitative arrangements. Gender-sensitivity in the design and delivery of social protection not only improves food security, but also empowers women.

Social protection is a universal human right. But the International Labour Office’s (ILO) World Social Protection Report 2017-19 found only 45 per cent of the global population had at least one social benefit, while the remaining four billion people are totally unprotected.

Coverage gaps reflect underinvestment in social protection, particularly in African, Asian and Arab countries. The World Bank’s The State of Social Safety Nets 2014 reported that 345 million are covered, while 870 million of the extreme poor in the world are not covered at all.

According to the World Bank’s World Development Report 2019, only 18 per cent of the poorest quintile in low-income countries gets social assistance, while two per cent have social insurance, with these rates rising to 77 and 28 per cent respectively in upper-middle-income countries.

The Rome-based UN food agencies estimated how much it would cost to sustainably end hunger and poverty by 2030. The ILO’s costing estimates for 57 lower income countries imply that even the poorest countries can afford to extend some social protection to all their citizens.

While some countries have the fiscal space to quickly develop and extend social protection floors, others will have to gradually extend coverage and benefits. Most low income countries will need external budgetary support, at least initially.

Countries normally achieve universal coverage through a combination of contributory social insurance and tax-based social assistance. Countries can use the ILO Social Protection Floors Calculator to estimate the costs of child and orphan allowances, maternity benefits, disability and old-age pensions as well as public works programmes for those without jobs.

Enough social protection can quickly end hunger and poverty, but is not sustainable without higher earnings for the poor able to work. An early big push for pro-poor investments will generate such additional incomes earlier, reducing longer term financing costs.

Over three quarters of of the world’s poor live in rural areas, where almost half the world’s population resides. Raising rural incomes sustainably is necessary to eliminate poverty and hunger.

Rising incomes should, in turn, increase investments, expediting exit from the vicious cycle of poverty, and eventually reducing the need for social protection.

Report: Heralding Article 25: A people's strategy for world transformation
After so many years of political inaction only the massed goodwill of ordinary people can bring about an end to poverty in a world of plenty through...
Article: Global Social Protection Charter
At the Asia-Europe People’s Forum (AEPF) of July 2016, the initiative was taken to draft a Global Charter for 'Universal Social Protection Rights'. These...
Article: As the Universal Declaration of Human Rights turns 70, it’s time to resurrect its vision of global sharing and justice
What are the political implications of meeting the established human right for everyone to enjoy an adequate standard of living? In short, it necessitates...
News: 53 economists write to IMF Directors on approach to social protection
The International Monetary Fund (IMF) was formed in 1945 to ensure the stability of the international monetary system. The letter below to IMF Directors...
Article: The ILO’s Global Social Protection Week needs to address austerity, the elephant in the room
Financing social protection systems that are both adequate and sustainable is not a fantasy. There are a number of measures that governments can take to...
Report: Social protection: Hot topic but contested agenda
Social protection has been on the UN agenda since its inception - and numerous reports from human rights experts spell out that governments and the...
Printer-friendly version