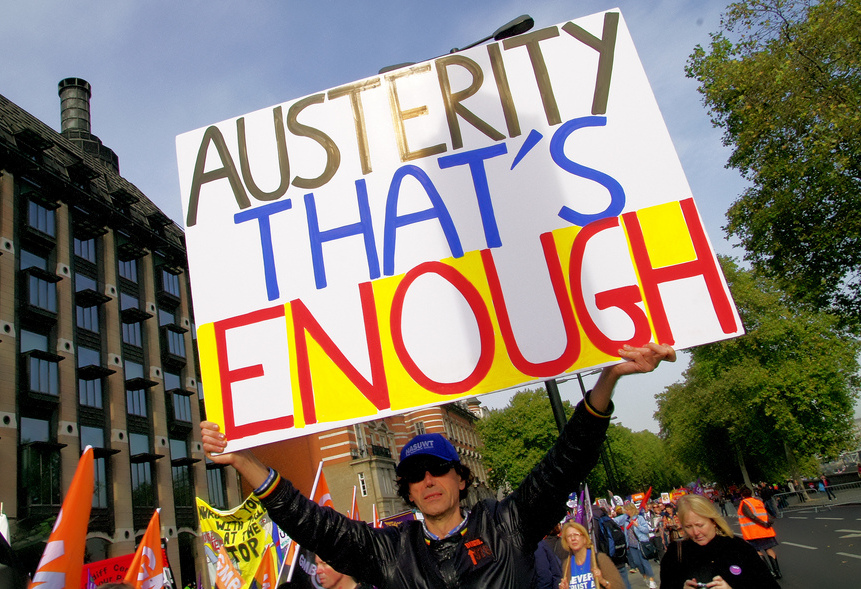 This week, a coalition of NGOs launched a campaign for a new law in the UK that could make sure that corporations pay their fair share of taxes to public coffers. Dubbed the ‘Tax Dodging Bill’, the proposed law could generate at least £3.6 billion a year for the UK treasury (equivalent to £600 for every household below the poverty line), and billions more for developing countries.

As a policy brief accompanying the campaign outlines, a just tax system is fundamental to a society that shares its wealth and resources fairly among the population. When those most able to pay can unfairly escape their contributions to society, inequality increases and there is less public money available to benefit the majority of people, including the poorest.

News headlines in recent years have revealed just how little tax big corporations pay, causing public outrage at a time of brutal austerity measures and growing inequality. In the UK, for example, the 7 big digital companies – Apple, Google, Microsoft, Amazon, Ebay, Yahoo and Facebook – made combined UK sales of about £9.5 billion in 2012, but only paid £54 million in corporation tax.

Many campaigning organisations highlight what a scandal this is when 8 million people in the UK live on less than is needed to cover a minimum household budget, while the richest 100 people in the country increased their wealth by over £40 billion in the last year. The direct action protest group UK Uncut have long pointed out how government austerity measures are geared towards transferring wealth from poor to rich, benefitting the richest and most powerful in society at the expense of the most marginalised.

As one UK Uncut activist states: “The tax system is one of the ways that wealth is supposed to be transferred from the rich to the poor, redistributing the wealth that our economic system concentrates at the top. When companies dodge tax it undermines this redistribution, and leaves less money to fund the public services or welfare this government is now ideologically intent on cutting beyond all recognition.”

ActionAid write that the news-grabbing controversies of big corporations who dodge paying their fair share of taxes in rich countries are just the tip of the iceberg. Developing countries lose an estimated $160 billion in tax revenues each year as a result of corporate tax dodging and rigged tax rules – more than all rich countries provide in overseas aid. When 1 billion children live in poverty in these countries and 57 million children are missing out on primary school, recovering this money could fund vital public needs like hospitals, schools and social welfare.

The Tax Dodging Bill sets out a pragmatic and balanced package of reforms to the UK system that represent some key steps the UK government can take on its own to tackle corporate tax dodging. These measures - explained in some detail in the policy brief - would make it harder for multinationals to dodge UK taxes, prevent them from getting unjustified tax breaks, make the UK tax regime more transparent, and also ensure that UK tax rules do not encourage British companies to avoid tax in developing countries.

As a set of campaign FAQ’s make clear, the effects of the UK’s biased tax rules are not limited to the UK itself, as they also incentivise overseas tax avoidance by UK-based multinationals – depriving poorer countries of tax revenues that are essential for fighting poverty. And this is clearly at odds with the UK government’s efforts to tackle global poverty and help developing countries to end their aid-dependency.

Campaigners therefore argue that the UK government should take action on tax dodging on its own, while continuing to engage in global processes to fix the international tax system. They write: “By committing to a UK Tax Dodging Bill within the first hundred days of taking office [after the general election in May 2015], UK political parties would demonstrate the UK’s commitment to tackling the problem of corporate tax dodging, showing leadership and setting the bar higher for global reform.”

However, the Tax Dodging Bill campaign recognises that stopping corporate tax avoidance in the UK and developing countries will ultimately require action at an international level. Although some official measures have been taken through the G20 group of countries and the OECD, progress remains slow and efforts don’t go far enough to prevent big companies from shifting profits and dodging tax. Oxfam are therefore proposing a World Tax Summit that would be more far-reaching and give an equal voice to those poorer countries excluded from current negotiations, which is planned to take place alongside the UN Financing for Development conference in Ethiopia in July 2015.

Share The World’s Resources is not a formal member of the Tax Dodging Bill coalition, but supports its aims as well as the essential framing of its message: that corporations must pay their fair share of taxes, as this is a key part of the established and most important system of sharing that we have (yet) created.

Article: No tax, no justice
Finding ways to increase tax revenue is critical if developing countries are to fund essential public services and reduce poverty. Global reforms to...
Article: Two discourses on sharing: social policy and the commons
The following article is based on a talk given at the 11th international conference of the Globalisation for the Common Good (GCGI), held at the Cité...
Report: Financing the global sharing economy, part three (4): stop tax avoidance
This section of the report 'Financing the Global Sharing Economy' argues that preventing the excessive leakage of revenues through tax avoidance and tax...
Blog: Attention America: welfare is not a dirty word
Bravo to the magazine 'In These Times' for proudly hailing the importance of the welfare state in America. It is essential that more progressives follow...
Page: Building a sharing society
As a priority for longer-term global reform efforts, governments need to ensure that economic systems are primarily geared towards meeting the basic needs...
Article: The rise of ‘British’ people power
In the space of a few weeks, a nationwide protest movement has emerged in Britain characterised by intelligent, humorous and peaceful direct actions. The...
Printer-friendly version