The UK is taking aid back to its colonial roots 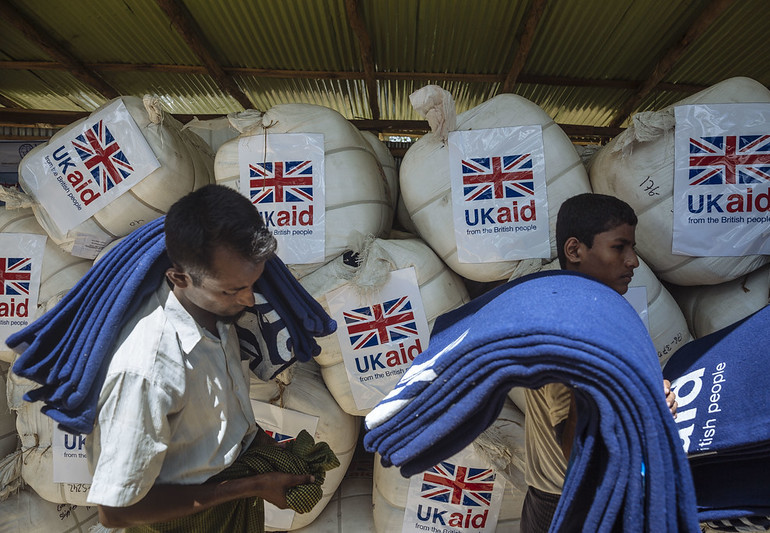 The government’s decision to scrap the Department for International Development will set back efforts to fix global inequalities by decades, writes Martin Drewry for the New Internationalist.

As colonial statues fall and demands for teaching an uncensored history of the British Empire grow, the UK faces a reckoning with its past. Calls for curriculum reform and a Truth and Reconciliation Commission to acknowledge, explore and help shape some atonement for the UK’s historic crimes are vitally important and must be acted upon. Equally critical is a need to assess Britain’s role in the world today, and how it benefits from and continues to perpetuate the legacy and structures of empire.

Yet against this backdrop, Prime Minister Boris Johnson has announced that the Department for International Development (DfID) will be abolished and absorbed by the Foreign and Commonwealth Office. His announcement stated that the newly merged department will expressly be used to ‘safeguard British interests and values overseas’.

While the budget for international aid remains intact, this move gives the Government the green light to use aid money, and therefore people’s lives, as a bargaining chip for serving corporate and political interests. In other words, it will take British aid back to its colonial roots.

UK aid has already moved in this direction. In 2017, a law was passed to allow for a dramatic scale-up of UK aid channelled to the government’s development finance institution, CDC Group.

CDC Group makes investments in large profit-making corporations, operating in areas as diverse as expensive private healthcare, to fossil fuels, to generate returns. The 2017 law allows these interests to benefit from up to $7.4 billion in UK government support at any time, with provision made for up to $14.8 billion. That’s eight times its former allocation. Moreover, CDC’s links with the structures of empire are evident. Formerly the ‘Colonial Development Corporation’, CDC Group has backed companies associated with historic land grabs, for example.

In his speech, Johnson states, that it ‘makes no sense’ to distinguish between aid or foreign policy: ‘They are one and the same endeavour, and they’re designed to achieve the same goals, which are right in themselves and serve our national interest.’ Yet DfID and the Foreign Office do not set out to achieve the same aims, and the Foreign Office has historically contributed to the problems that DfID is trying to fix.

Aid that is already channelled through the Foreign Office and other departments scores poorly compared to aid spent through DfID, accused of far lower levels of transparency and accountability. It also tends to pursue a more expressly neoliberal agenda – and profits for British business. The cross-government Prosperity Fund, managed by the Foreign Office, for example, sets out to remove barriers to trade, reform sectors like infrastructure, finance and energy, and create opportunities for UK business. Even the Fund’s programmes for social sectors like healthcare aim to generate these opportunities, despite heightened concerns that privatization of such essential public goods risks eroding human rights and further marginalizing people in poverty.

There is a clear need to reform UK aid. And any overhaul of aid would have to reverse these shifts towards aid in the national interest. But aid structures must also make a more fundamental shift. They need to evolve to recognize the many ways in which the UK profits from its relations with countries in the Global South, and find mechanisms to help meaningfully address chronic global power imbalances. These relations stretch back to the legacy of colonialism but also include more recent structures, such as unfair global tax and trade rules. It is these forms of structural inequality that can be found at the root of poverty worldwide.

The cost of this extraction from poorer countries can be priced up. In 2015, Health Poverty Action’s research showed that while over $161 billion was coming into Sub-Saharan Africa through aid money, loans and other flows, $203 billion flowed out again. This was either extracted directly – mainly through corporations repatriating profits, and by illegally moving money out of the continent – or by costs inflicted by the rest of the world through the climate crisis. That’s an overall loss of over $41 billion from the region in 2015 alone.

The reforms that aid so urgently needs – both in the UK and globally – should evolve aid into a system of redistribution, redress and reparations, to recognize and address these historic and contemporary imbalances. It should change the governance of aid mechanisms, to ensure donor nations can no longer override the voices and interests of countries in the Global South. Such reforms must also be accompanied by ambitious approaches to tackle the global structures behind poverty and inequality today, such as coordinated global action to clamp down on tax dodging.

Abolishing DfID instead risks squeezing any meaningful efforts to address poverty and inequality, in favour of an overt pursuit of the national interest. Yet again, British imperialist attitudes will win out, and the poorest people around the world will pay the price – at a time when global solidarity is needed more than ever.

Blog: As coronavirus spreads to poorer countries, here's how the world can help
The time has come for a massively ambitious plan to overcome the impacts of the coronavirus crisis in developing countries, and on a scale we’ve never...
News: Corrupt elites siphon aid money intended for world’s poorest
A new study has found that as much as a sixth of foreign aid intended for the world's poorest countries has flowed into bank accounts in tax havens owned...
Article: Much “foreign aid” Is taxpayer-funded plundering of the global south
In actuality, USAID has been a taxpayer-supported program for neocolonial exploiters requiring long-term protection at public expense, writes Barbara G....
Article: We could eliminate extreme global poverty if multinationals paid their taxes
If we recouped the annual global revenue losses due to multinational tax avoidance, we could literally eliminate extreme income poverty around the world,...
Blog: Only internationalism can beat Covid-19
Tackling the coronavirus demands international action and solidarity on all fronts - not just for reasons of equity, but also practicality, writes Vanessa...
Printer-friendly version