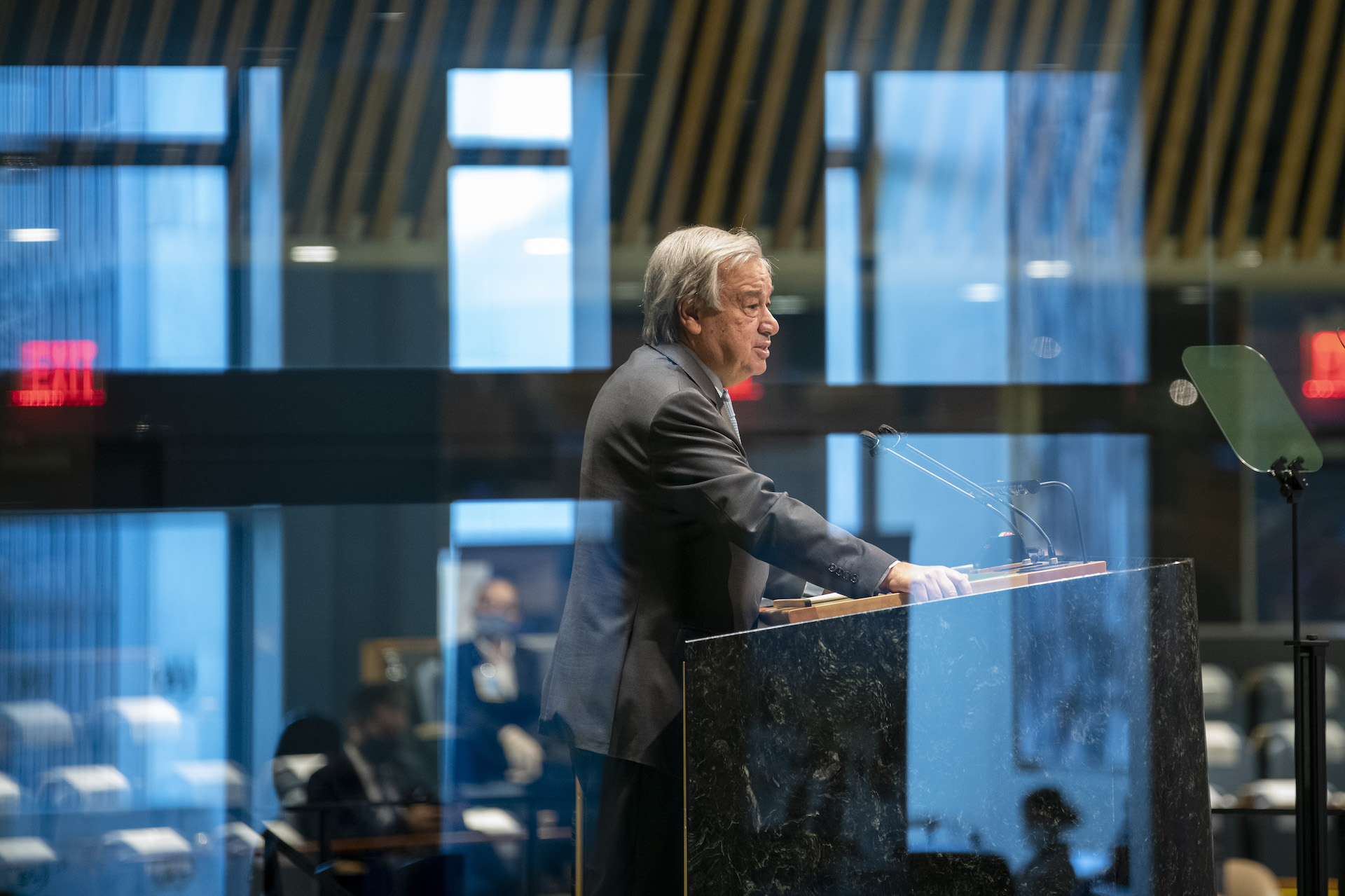 The High-level Commemoration of the 75th Anniversary of the UN brought together 111 Heads of State and Government and 14 Ministers, who spoke in support of multilateralism and global solidarity, among other themes.

Participants adopted a Declaration that recognizes multilateralism as a necessity for a more equal, more resilient, and more sustainable world, and that implementation of the 2030 Agenda is necessary for survival.

The official commemoration of UN75, which took place at a socially-distanced UN Headquarters, with Heads of State and Government joining virtually, focused on the theme of ‘The future we want, the United Nations we need: Reaffirming our collective commitment to multilateralism.’

The UN Secretary-General warned that the world faces a “surplus of multilateral challenges, and a deficit of multilateral solutions.” In January 2020, Secretary-General António Guterres had launched the UN75 initiative as “the world’s largest conversation about current global challenges, and the gap between the future we want and where we are headed if current trends continue.”

The UN crowdsourced views on its future priorities and solutions from the global public, through a survey of over a million people in all 193 UN Member States; more than 1,000 dialogues in 82 countries across the world; and artificial intelligence analysis of social and traditional media in 70 countries, along with academic and policy research mappings in all regions.

Presenting findings from the consultation during the high-level commemoration, Guterres noted they demonstrate the public appetite for increased global solidarity, and emphasized that improved global governance does not threaten national sovereignty. Guterres identified gender inequality as the “greatest single challenge to human rights around the world” and expressed concern about the “climate calamity”, rising poverty and nuclear weapons.

UN Security Council President Abdou Abarry said the social and economic impacts of COVID-19 have exacerbated challenges such as the illicit arms trade, human trafficking, and international terrorism. He also noted that there is no other global organization with the legitimacy and convening power of the UN.

The UN Economic and Social Council (ECOSOC) President Munir Akram said his presidency will focus on mobilizing finance to address the pandemic, achieve the SDGs, avoid the climate catastrophe, and invest in sustainable infrastructure. Four youth leaders called for concrete actions to support those who are left behind and to tackle climate change, among other issues.

President of Malawi Lazarus Chakwera, for the least developed countries (LDCs), listed five focus areas for the UN: strengthening multilateralism, including through UN reforms; addressing inequality, including the gender gap and digital divide; financing to implement the 2030 Agenda; pursuing holistic approaches to reflect the singular objective of all SDGs; and promoting a people-centric approach.

President of the European Council (EC) Charles Michel, for the EU, underscored the need for COVID-19 treatment to be accessible to all. President of Azerbaijan Ilham Aliyev, for the Non-Aligned Movement (NAM), called for revitalizing the UN General Assembly and reforming the Security Council. Many other speakers expressed support for UN reform, and emphasized the importance of multilateralism in COVID-19 recovery and progress towards a more equitable, sustainable world for all.

President of South Africa Cyril Ramaphosa noted that climate change, environmental disasters, transnational crimes, and migration can be solved only through multilateralism. Prime Minister of Sweden Stefan Löfven announced that Sweden will host a conference in Stockholm in 2022 to commemorate the 50th anniversary of the UN Conference on the Human Environment.

During the event, Heads of State and Government adopted a ‘Declaration on the Commemoration of the Seventy-fifth Anniversary of the UN (A/75/L.1).’ In the Declaration, Member States recognize that while there have been many achievements in the past 75 years, the world envisaged by the UN’s founders 75 years ago has not yet been realized: it is plagued by growing inequality, poverty, hunger, armed conflicts, terrorism, insecurity, climate change, and pandemics; people are forced to make dangerous journeys in search of refuge and safety; the LDCs are falling behind; and complete decolonization has not been achieved.

Further, Member States recognize that global challenges are interconnected and can only be addressed through reinvigorated multilateralism, as demonstrated by the COVID-19 pandemic. They agree that multilateralism is not an option but a necessity, to build back better for a more equal, more resilient, and more sustainable world, with the UN at the center of efforts. They also recognize that the implementation of the 2030 Agenda for Sustainable Development is necessary for survival.

In the Declaration, Member States resolve to:

Declaration on the Commemoration of the 75th Anniversary of the UN

Article: Global cooperation tested by the pandemic at UNGA 75
The 75th UNGA is a moment for the world to focus on realising the full potential of the United Nations' founding principle of "achieving international...
Report: Global efforts to minimize poverty amid COVID-19 are 'full of holes': UN expert
Current social protection programs are not enough to stop millions of people falling into poverty during the COVID-19 pandemic, according to the UN...
Blog: The UN’s 75th birthday: A critical chance for the globe to save itself
The UN’s 75th anniversary this year is a chance for taking stock, strengthening the UN and confronting the challenges the system will face in the years...
Article: Global poverty: coronavirus could drive it up for the first time since the 1990s
The global pandemic could push half a billion people into deeper poverty on some counts and lead to a new COVID-19 apartheid era, warn Andy Sumner,...
Printer-friendly version