Where is the mass mobilized movement for Medicare for All? 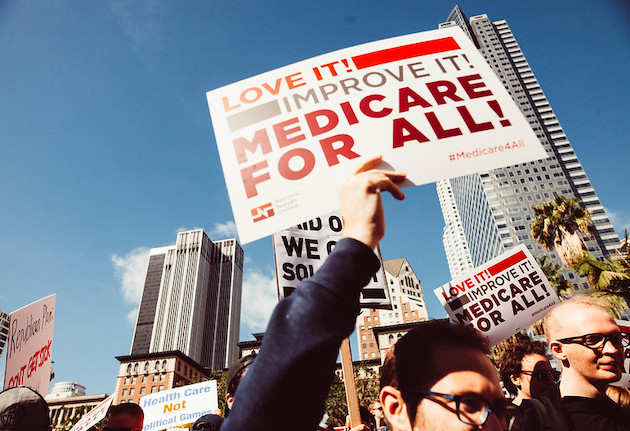 It wouldn't take more than 1% of the U.S. population to rise up and get organized behind key popular demands to make them a reality - and yet we continue to endlessly wait, writes Ralph Nader in Common Dreams.

Long before the Covid pandemic, it was important to ask, where are the mass movements to enact in Congress majoritarian-supported changes and reforms? Another question: Whatever happened to the mass rallies that used to command the attention of our 535 members of Congress to whom we have given our sovereign power?

Let’s start with universal healthcare, which President Harry Truman urged on a recalcitrant Congress in 1945. Proponents, including the labor unions, could not overcome the physicians’ lobby in the form of the American Medical Association. President Lyndon Johnson wanted universal health insurance but had to settle for Medicare, with some limits, for the elderly and Medicaid for some poor families. Opponents cited the expense of the Vietnam War as the reason for such limitations.

Since then, there have been no mass rallies or marches for universal healthcare. Sporadic demonstrations by a few hundred people on the Capitol steps showed insensitive members, who have their own comprehensive health insurance, the decline of civic energy.

With the huge waste, gouging, corruption and preventable casualties documented in today’s health delivery industry, and about 5000 people a week dying in hospitals due to what a peer-reviewed report by Johns Hopkins School of Medicine called “preventable problems” in hospitals, one would think there would be regular marches on Washington to pass Medicare-for-All. The Canadians did this nearly sixty years ago. (See, singlepayeraction.org). Too many people are suffering or ridden with anxiety, dread and fear, without adequate or any health insurance, while too few people are demanding action by Congress.

Senator Bernie Sanders’ insurgent presidential campaign in 2016, sabotaged from victory for the nomination by Hillary Clinton’s Democratic Party apparatchiks, could be seen as a mass voter action. However, Sanders has yet to take this huge support and mailing list and convert it into a mass movement. And so, the painful years keep passing.

Other majoritarian reforms and redirections have similarly failed to coalesce into mass movements, as occurred for Civil Rights and environmental protection in the Sixties and early Seventies. Reforms such as living wage, to allowing workers to more easily form unions’ bargaining with big business, ending the student loan gouging and rackets, eliminating the huge tax escapes for the wealthy and corporations, investing in rebuilding communities’ public works all over the country, cracking down on the corporate crooks draining consumers’ pocketbooks, harming their safety and ending the corrosive impact of corporate campaign contributions. All these measures have broad public support.

What are some reasons for a sedentary citizenship in a country? Remember our Constitution starts and ends with “We the People,” not “We the Corporations.” You, the readers, know all the ways powerful forces keep people down, feeling powerless and distracted with 24/7 so-called entertainment, plus everything in between. Many aggrieved people have a hard time just getting through the day.

Imagine if, despite the obstacles to action, just one percent of the citizenry got knowledgeable and mobilized for Congressional reforms that have a quieter, large majority of the people behind them. One percent of adults is about 2.5 million Americans spread throughout 435 Congressional Districts. In the Sixties, it took a lot less than that level of organized and committed people.

Someday, some leaders will emerge in the above-noted fields and other crucial areas of injustice and practice this one percent theory.

I wrote a small book, Breaking Through Power: It’s Easier Than We Think, to explain how optimistic critical masses throughout American history worked together to improve our society.  I described the kinds of changes that one percent of the people could advance to revolutionize politics for the common good and “the pursuit of happiness.” For that to happen, a sufficient number of people have to civically believe in themselves and lock arms together on actions for a change.

Ralph Nader is a consumer advocate and the author of "The Seventeen Solutions: Bold Ideas for Our American Future" (2012). His new book is, "Wrecking America: How Trump’s Lies and Lawbreaking Betray All" (2020, co-authored with Mark Green).

Report: Heralding Article 25: A people's strategy for world transformation
After so many years of political inaction only the massed goodwill of ordinary people can bring about an end to poverty in a world of plenty through...
Article: Call to the G20 to invest in healthcare instead of militarisation
Sign a petition from the International Peace Bureau (IPB) calling for a dramatic reduction of military spending in favour of healthcare and meeting social...
News: European action day against the commodification of health
Every year, different networks of trade unions, citizens’ groups, NGOs and social movements organize a series of actions in several European cities for...
Article: Half the world lacks access to essential health services, 100 million still pushed into extreme poverty because of health expenses
At least half of the world’s population cannot obtain essential health services, according to a new report from the World Bank and the World Health...
Article: Financing Health and Education for All
An extra $50 billion or so per year could help ensure that children everywhere have access to basic health care and schooling - a sum that could easily be...
Printer-friendly version