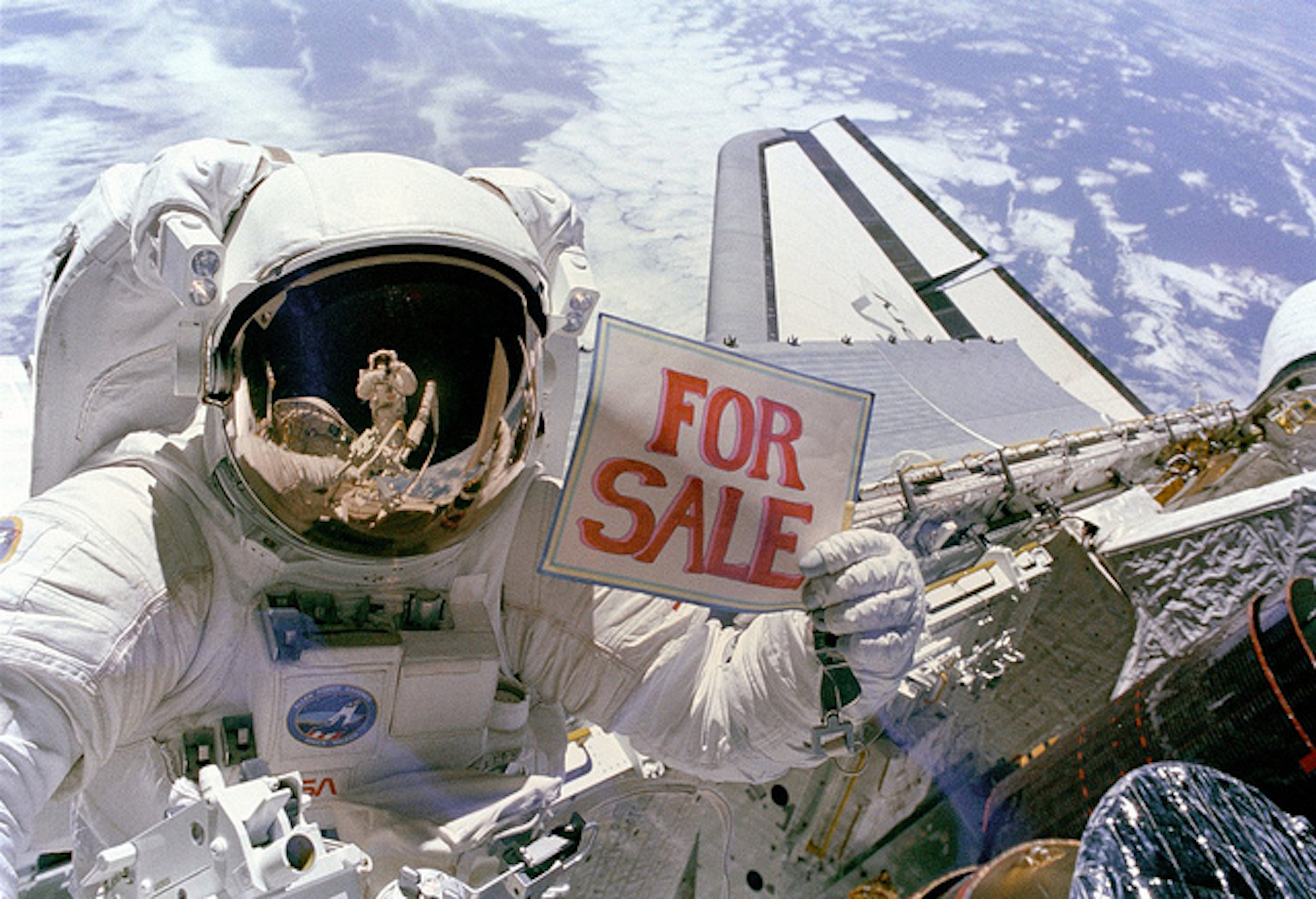 Who owns outer space? Our most idealistic visions of the future require us to transcend our narrow personal or nationalistic interests, but increasingly, space seems likely to be divvied up among the powerful, as has so often happened with the Earth. Can space be managed to serve the common interest? A commentary by EarthSharing.

Space is generally thought of as a commons. A commons is a resource which is not under the exclusive control of anyone. This makes it an interesting and challenging economic coordination problem. The US Department of Defense classifies outer space as one of the “global commons” alongside the oceans, atmosphere, and cyberspace.

Former Under Secretary of Defense for Policy, Michele Flournoy, and Shawn Brimley of the Center for a New American Security write:

“…as rising nations and non-state actors become more powerful, the United States will need to pay more attention to emerging risks associated with the global commons, those areas of the world beyond the control of any one state—sea, space, air, and cyberspace—that constitute the fabric or connective tissue of the international system.”

Even during the heated Space Race between the United States and the USSR, there were lofty ideals about how to treat the cosmos. The Outer Space Treaty, ratified by all major world powers at the time, limits the use of orbital pathways and celestial bodies to peaceful purposes. Weapons of mass destruction are specifically banned. More interestingly, it also prohibits any signatory nation from claiming ownership of celestial resources.

The resources of space were not to be seen as just a bunch of loot waiting to be plundered. According to the Treaty, managing outer space was viewed as an international responsibility of utmost importance, for the benefit of all.

But a new space race is on. This time, a private space race. Billionaires are funding serious commercial spaceflight companies such as SpaceX, Blue Origin, Planetary Resources, Virgin Galactic, Stratolaunch Systems, and Bigelow Aerospace, and other lesser-known private companies and defense contractors are also competing. Additionally, competitions like the Google Lunar X Prize are under way. All of these enterprises share the goal of making space more accessible.

Elon Musk once raised the possibility of launching as many as four thousand micro-satellites into low Earth orbit for the purpose of providing worldwide high-speed internet access. Mark Zuckerberg had planned a similar service  via Internet.org. Both men have quietly put these plans on the back-burner; however, the inexorable trend of cheaper spaceflight is continuing to increase satellite congestionsurrounding Earth.

The progress that SpaceX has made with reusable launch vehicles does help reduce the quantity of space junk per-launch, but it also makes spaceflight cheaper thus encouraging more congestion. Junk continues to accumulate much faster than it is burned up.

Space junk is any small debris left in orbit by spacecraft. The problem is that it can impact orbiting spacecraft at speeds up to twenty times faster than a bullet. Worse yet, in the event of a collision, more debris is created.

In the worst-case scenario, this process of collisions creating more debris starts a chain reaction called Kessler Syndrome. If there are enough orbiting satellites, this chain reaction can eventually consume all of them, and leave behind a speeding cloud of bullets encircling the Earth and keeping humanity grounded for a century or more.

In political economy, we would call this an example of tragedy of the commons.

To reduce this threat, a number of mechanisms have been proposed. Decommissioning large obsolete satellites can significantly reduce the likelihood. However, doing so is expensive and of little direct benefit to the individual spacefaring organization. Nonetheless, the European Space Agency has already planned missions as part of its Clean Space initiative.

Another theoretical mitigation technique includes the development of lasers to shoot down space junk, or to redirect it whenever it threatens important orbital spacecraft.

Who ought to be paying for these cleanup efforts? If billionaires intend to start launching thousands of satellites, is it simply up to the public to clean up the mess?

The ‘polluter pays principle’ is standard in environmental law. In addition to aligning with our moral intuitions for responsibility, taxes on pollution have the benefit of discouraging the damaging activities that create pollution in the first place.

In keeping with this thought, it would be sensible to propose a Pigouvian tax on anyone who creates space junk, in proportion to the amount of junk that they create. Since this junk can be accurately detected, it would be straightforward to measure and determine the tax.

Amending the Outer Space Treaty and establishing a body to implement the polluter pays principle would be a common sense method by which we could work to eliminate the threat of space junk.

There’s another possible source of revenue if we consider that the orbital paths themselves are a finite resource. Satellite collisions have happened in the past and will continue going forward. Indeed, every satellite launched brings with it a small risk of collision. In fact, it has happened before. And the more satellites we have, the greater the likelihood of collision and, eventually, of triggering Kessler Syndrome.

Such a model would certainly be more fair and predictable than our current process, which is for companies to patent orbital pathways, and sue anyone who infringes on it (regardless of collision risk). Granted, the FAA’s Office of Commercial Space Transportation also has a permitting process in the United States. But permitting practices vary by nation, and there’s little or no international coordination for revenue-sharing, insurance, or cleanup.

Motherboard interviewed Andrew Rush, a patent attorney and entrepreneur with expertise in space law, who said “As more and more companies start commercial activities using satellites, and using new and innovative ways to do so, we should see an uptick in patent activity.”

“We may also see the attendant uptick in patent litigation around some of those activities,” he added. “I personally hope that’s not the direction that we go. I hope there’s a lot more licensing and a lot more cooperative ownership and stewardship of patents, rather than just suing each other. “

An exemplary model of proper resource management can be found in the Norwegian Oil Fund. Upon discovery of its oil reserves, Norway instituted the collection of economic rent based on the revenue generated from oil extraction, plus oil exploration licensing fees. The resulting revenue was then kept in a trust fund and used to invest both within Norway and internationally. As of June 2015, the fund has accrued $873 billion. Given its size and stake in companies worldwide, the fund has become an significant player in international affairs. As such, it pursues economic and social justice through its decisions concerning its holdings, divesting from companies that violate its ethical standards.

If our civilization is able to use market pricing to collect economic rent from the Earth’s geosynchronous orbits, we would enjoy similar success as Norway while preserving a critical resource. Such concepts are already proving successful here on Earth. London uses congestion pricing to reduce traffic in its city center, and uses that revenue to fund public transportation. Congestion in space is ultimately no different.

Let’s preserve our common inheritance of space for future generations, not at the expense of our current generation, but by achieving justice. We all deserve to share the benefits and the value of outer space.

Blog: Debating how to protect and share the commons
The latest discussion among members of the Great Transition Initiative focuses on a pragmatic institutional innovation for protecting and sharing co-owned...
Page: Sharing the global commons
Guaranteeing everyone access to essential goods and services will not be enough to create a just and sustainable world. Governments also need to rethink...
Article: Sharing the commons: wealth, power and natural resources
This presentation was given at The International Union for Land Value Taxation (theIU.org) conference on 25th July 2013, held at The School of Economic...
Printer-friendly version