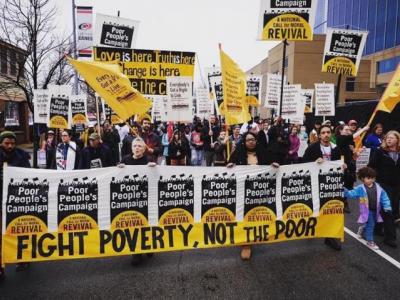 On May 14, the Poor People's Campaign will launch its first nation-wide event of the season with nonviolent moral direct actions in over 30 state capitals.

Through highly publicized, non-violent moral fusion direct action over a 6-week period in at least 30 states and the District of Columbia, the Campaign will force a serious national examination of the enmeshed evils of systemic racism, systemic poverty, ecological devastation and the war economy during a key election year.

SOMEBODY’S HURTING OUR PEOPLE: Children, Women, and People with Disabilities in Poverty

THE WAR ECONOMY:Militarism and the Proliferation of Gun Violence

THE RIGHT TO HEALTH AND A HEALTHY PLANET: Ecological Devastation and Health Care

A NEW AND UNSETTLING FORCE: Confronting the Distorted Moral Narrative

If you're ready to join our movement to transform the political, economic and moral structures of our country, add your name now.