The IMF must immediately stop promoting austerity around the world 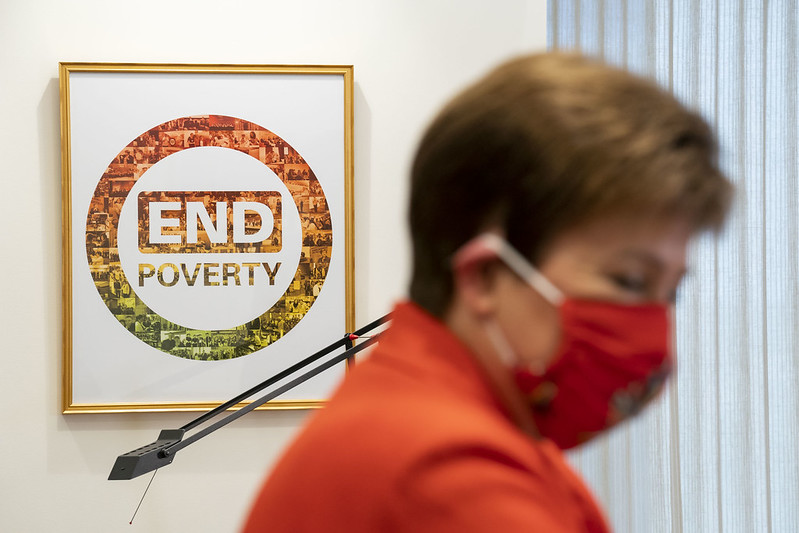 More than five hundred of the world’s leading charities, social groups and academics have sent a letter to the International Monetary Fund warning that its support programs, which have had to be ramped up to cope with COVID-19, were condemning many countries to years of austerity.

We, the undersigned, call on the IMF to immediately stop promoting austerity around the world, and instead advocate policies that advance gender justice, reduce inequality, and decisively put people and planet first.

As those who care about governments’ ability to fulfil human rights and advance progress towards the Sustainable Development Goals, we express the utmost alarm at the IMF’s advice for countries to return to austerity once the current crisis recedes. This pandemic has laid bare the deadly repercussions of systematically weak investments in health, education and social protection, hardest felt by marginalized populations including women, older people, racial and ethnic minorities, informal workers and low-income families. This crisis has also shone light on the shrinking of the middle classes and worsening gap between rich and poor.

The IMF has spoken repeatedly of the need for a fair and green recovery. It has said that economic and gender inequality, climate change, and poor governance can weaken growth and undermine stability. In recent years, it developed operational guidance for staff on embedding gender and economic inequality analysis into its work and approved a macroeconomic framework for social spending. All of this would suggest that the IMF is ready to use its influence and authority to support countries in reducing inequality.

And yet, despite this rhetoric and its own warnings of deepening inequality, the IMF has already started locking countries into new long-term austerity-conditioned loan programs in the past few months. Beyond the conditionality in these recent programs, we note that a significant number of the IMF’s COVID-19 emergency financing packages contain language promoting fiscal consolidation in the recovery phase. And with governments struggling to pay increased debt servicing and expected to continue to need extraordinary levels of external financing for years to come, IMF loan programs — and the conditions that accompany them — will play a highly influential role in shaping the economic and social landscape in the aftermath of this pandemic.

Fiscal consolidation driven austerity would only worsen poverty and inequality and undermine the achievement of economic and social rights. The IMF’s own research corroborates this. Time and time again, rigid and rapid fiscal consolidation conditioned in IMF programs has meant devastating cuts in health and education investments, losses of hard-earned pensions and social protections, public wage freezes, layoffs, and exacerbated unpaid care work burdens. In all cases, it is the most vulnerable people in societies who bear the brunt of these reforms, while the elite, large corporations and creditors enjoy the benefits. Aside from the direct impacts, fiscal consolidation doesn’t ensure economic recovery and the creation of new jobs, and rapid consolidation could instead deepen the downturn. It won’t deliver a just transition towards climate resilient economies either.

Instead of austerity cuts, it is critical to create fiscal space and give governments the time, flexibility and support to achieve a sustainable, inclusive and just recovery. Immediate and urgent steps are needed to support the financial health of countries through grants and other highly concessional financing, supporting debt cancellation and restructuring, and issuing a new allocation of Special Drawing Rights. Medium to longer term recovery efforts, however, should continue promoting further fiscal and policy space that allows for an increase, rather than a decrease, in social spending, and progressive tax policies that collect sufficient revenue and redistribute wealth fairly.

This means systematically assessing the impacts of fiscal policy reforms on gender and economic inequality and rejecting those that have negative social impacts. It means negotiating agreements transparently with input from a range of stakeholders including civil society through national social dialogue. It means recommending and promoting progressive tax reforms such as taxes on wealth and the excess profits of large corporations, meaningfully combatting tax evasion, avoidance and illicit financial flows. And it means systematically supporting governments to restructure their debts so that they can prioritize investments in quality public services.

The global economy stands at a crossroads between further decades of austerity and debt crises, or adopting a macroeconomic framework compatible with fighting inequality, pursuing climate justice, realizing human rights and achieving the Sustainable Development Goals.

Ahead of the 2020 IMF Annual Meetings, we call on the IMF to turn away from the mistakes of the past and finally close the dark chapter on IMF-conditioned austerity for good.

Filed under:
Poverty and hunger, Inequality, Environment, Finance and debt

Blog: Gleneagles 15 years on: The last debt cancellation
Last week marked 15 years since the G8 Summit in Gleneagles, Scotland, when leaders of the world’s richest countries agreed debt cancellation for many of ...
Article: We can’t trust the IMF and World Bank to lead the COVID-19 recovery
Despite decades of protests against them, the IMF and World Bank continue to force the same discredited policies on poor governments and their people,...
Article: People in the Global South don’t need debt relief, they need a new system
Far from being the 'great leveller', COVID-19 has exposed and deepened socio-economic inequalities, writes Meera Karunananthan for openDemocracy.
Report: Out of service: How public services and human rights are being threatened by the growing debt crisis
Public services play a critical role in advancing human rights and fighting inequality. But growing levels of external public debt threaten the very...
Printer-friendly version