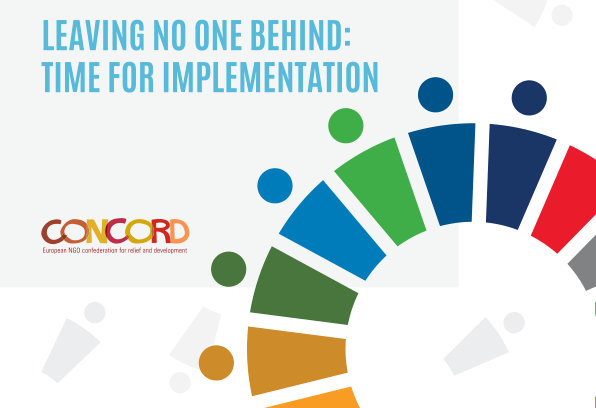 Less than 10% of EU aid money reaches the countries where it is most needed, according to a study that found levels of assistance had dropped for the second year running.

The EU and its member states remain the biggest development donor group in the world – investing €71.9bn (£61bn) in 2018, more than half of global aid – but its contribution was 5.8% lower than in 2017, the European NGO network, Concord, found in its AidWatch report.

Only Sweden, Luxembourg, Denmark and the UK met the 0.7% commitment.

The UK’s three main political parties have committed to retaining the aid target.

“We are moving further away from the 2030 Agenda [for sustainable development],” said Luca De Fraia of ActionAid Italy. “Not only are we missing the target in terms of quantity, but also the quality of aid is lagging behind.”

Åsa Thomasson, from Concord Sweden, called on EU leaders to provide more aid and ensure it is used effectively to “make the biggest difference to people who are most marginalised, excluded or discriminated against and the poorest and most financially challenged countries”.

The report noted progress on what can legitimately be recorded as aid. Some countries had included domestic spending on students, refugees or security in official figures. But such costs – like debt relief, interest repayments on loans, or assistance “tied” to the donor country – are categorised as “inflated aid”, since they do not necessarily contribute to development and are often funds that never leave the EU.

This year’s report shows a 25% reduction in inflated aid, while refugee costs decreased by approximately 35% and the use of aid for debt relief dropped by 66%.

Jan van de Poel, policy and advocacy manager at the European Network on Debt and Development, said he was concerned that the commission is overestimating the potential for “blended finance” (linking aid with loans from publicly-owned institutions or commercial lenders) to help achieve the sustainable development goals.

He pointed out that, as recently as 2016, more than half of all reported contracts were still awarded to firms in the donor country. “Donors not only need to untie all aid, but also make sure that their procurement practices are tailored towards the private sector in developing countries,” he said.

Claire Godfrey, interim director of policy, advocacy and research at Bond, the UK development network, praised the Department for International Development (DfID) for maintaining the 0.7% pledge and ensuring that the majority of its aid reached the people who need it the most. She added that other EU countries needed to “step up to the plate”.

Godfrey said DfID would ideally have oversight of all UK aid, rather than multiple departments, since this would “ensure not a single penny is diverted away from the poorest, most vulnerable and most marginalised”.

With a general election looming, Labour, the Conservatives and the Liberal Democrats have all stated their commitment to retaining the 0.7% aid target, equating to roughly £14bn, while the Green party said they would raise it to 1% – in line with Sweden.

At a joint hustings event on women’s rights and sustainable development held by ActionAid UK and the Overseas Development Institute on Monday, Lord Ray Collins pledged that Labour would triple funding to grassroots women’s groups in the global south.

Elizabeth Babade, candidate for the Brexit party in Warrington North, said her party would cut the foreign aid budget but declined to say by how much.

The Conservative party did not put forward a candidate for the event, but restated its commitment to the 0.7% target in the House of Commons earlier this month. It stopped short, however, of committing to the retention of DfID as a separate department to the Foreign and Commonwealth Office.

The UN Conference on Trade and Development’s Least developed countries report, also published this week, called on the world’s poorest nations to ensure external finance from all sources is “directed to national development priorities” as the best way to “manage their aid dependency and eventually escape it”.

Article: Aid in reverse: how poor countries develop rich countries
New research on global financial flows shows that the usual development narrative has it backwards; aid is effectively flowing in reverse. And some of the...
News: Aid spending stagnates as rich countries shift focus from refugees to poor nations
Rich nations spent more on helping poor countries last year but less on refugees at home, leading to stagnation in overall aid expenditure - which remains...
Article: Buzzwords and tortuous impact studies won't fix a broken aid system
Fifteen leading economists, including three Nobel winners, argue that 'aid effectiveness' projects might yield satisfying micro-results, but they...
Report: Financing the global sharing economy, part three (5): increase international aid
This section of the report Financing the Global Sharing Economy argues that there can be no justification for advanced economies redistributing so little...
Printer-friendly version