A new era of global protest 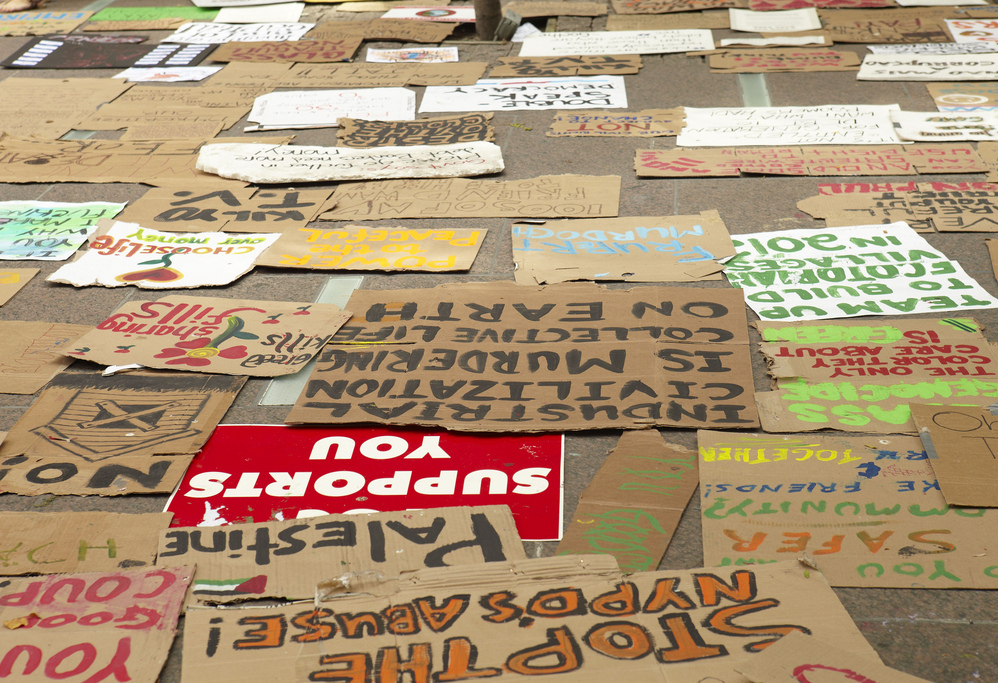 As a new era of mass public protest grows in response to social, economic and political injustice across the world, STWR's July newsletter highlights some of our recent publications that advocate for global economic sharing to become a common platform of the emerging people's voice.

Current events in Egypt as well as the recent protests in Brazil and Turkey serve as a crucial reminder that the spirit of public mobilisation that reached a pinnacle during the historic protests of 2011 is still very much alive. Although the Arab Spring and Occupy movement are no longer headline news, there is every indication that humanity has entered a new era of mass public protest in reaction to social, economic and political injustice. Moreover, the scale and frequency of such protests are likely to escalate in the coming years if governments continue in their attempts to resurrect the old economic order, and fail to implement the measures that are needed for a more just and sustainable world.

The concerns voiced by protestors across the world are wide-ranging on the surface, encompassing poverty and rising inequality, the high cost of living, government corruption, the misuse of public revenue and a growing demand for democratic representation. But to a greater or lesser extent the need for economic sharing cuts to the heart of all these issues, as they are ultimately the result of our failure to share wealth, political power and public resources fairly throughout society.

Applying economic sharing as a solution to global crises has been the focus of STWR's recent activities and publications, including an interview in WereldDelen magazine on the need for economic reform and political transformation, and an op-ed for Global Sharing Day that examined whether the concept of economic sharing has relevance to the crises facing the world's  broken food systems. In a presentation at the School of Economic Science's annual colloquium, we also outlined the pivotal role that economic sharing can play in addressing the emergency of needless poverty-related deaths; correcting growing inequalities; balancing unequal and unsustainable global consumption patterns; and de-escalating conflict over the world's increasingly scarce natural resources.

If a demand for economic sharing is the solution to such a wide range of global issues, then how long before citizens in different countries recognise their common cause and adopt a united platform for change? The trends are clearly moving in the right direction, as a growing proportion of ordinary people actively place the needs of the planet as a whole before their personal or national interests. But as we emphasised in an interview on VoiceAmerica Radio, without a global movement of ordinary people that share a collective vision of change it may remain impossible to overcome the vested interests and structural barriers to progress that we face. Advocating for economic sharing on a global scale will remain central to STWR's work in the months ahead, which will include a website redesign, a new campaign and forthcoming reports and public presentations.

One World, One Wealth?
In a presentation given at the School of Economic Science’s annual colloquium, STWR outlined why the principle of sharing – as practiced in families and communities since the dawn of civilisation – should be placed at the forefront of policymaking in order to address the social, environmental and security crises that humanity now faces.

A New Economic Paradigm: Sharing The World’s Resources
Share The World's Resources was interviewed on VoiceAmerica talk radio about the reasons for founding the organisation, what economic sharing means, and the practical application of sharing as a solution to the interlocking crises facing humanity. Hosted by Audrey E. Kitagawa on the weekly show Our Sacred Journey.

STWR Interviewed by WereldDelen magazine
The social, environmental and economic crises that continue to reap havoc across the globe provide a critical opportunity for ordinary people to demand economic reform and political transformation, say STWR in an interview with John Habets & Henk Gloudemans.

Global Sharing Day 2013: Let's Talk about Food
The idea of sharing food has taken root in recent years as a response to our broken food systems, but does it make sense to talk about food sharing on a global basis? Perhaps it does, as long as we advocate a true form of economic sharing that addresses the power structures and politics underlying our unjust globalised food economy.

Can the Sharing Economy Solve Global Hunger? It All Depends...
Few people within the sharing economy movement are considering the application of this important concept to the most pressing global issues of our time. So it’s very encouraging to see an article that asks if sharing can solve global hunger – although a comprehensive answer deserves much more research, insight and consideration.

A Vision of Sharing in a Not-For-Profit World
A new project by the Post Growth Institute is exploring the prospect of a mainstream shift toward not-for-profit enterprise as an alternative to the growth-based model of business and finance. Could this form a crucial plank in the vision for a new economy based on sharing and cooperation, rather than competition and endless consumption?

The Conversation on Sharing with a Capital ‘S’
Discussions and events that focus on sharing are becoming ever more mainstream in 2013, but the broad conversation that encompasses the sharing economy also poses some challenges - especially when we consider what sharing means in international terms.

The International Union for Land Value Taxation 4-day conference in London, 24-28th July 2013
STWR will be presenting at the ‘Economics for Conscious Evolution’ event organised by Alanna Hartzog (co-director of Earth Rights Institute) and David Triggs (Chairman of the Henry George Foundation).

Globalisation for the Common Good Initiative (GCGI) in Paris, 25-28th August 2013
STWR will be chairing and participating in a panel discussion on global economic sharing at the Common Good Forum, which is the 11th Annual Conference of the GCGI.

World Public Forum: Dialogue of Civilisations in Greece, 2-6th October 2013
Having presented a talk entitled 'Envisioning a New Earth' at this international forum in 2012, STWR has been invited to contribute this year on the theme of 'Alternative Visions of the World'. A video of last year’s forum can be watched here.

News: The people’s responsibility to stand in solidarity with the poor
Read about STWR's work in 2012 and some of our planned participation at events over the coming year in the newsletter for March, which includes a run-down...
News: The emerging debate on global sharing
In the last newsletter of 2012, STWR highlights some recent events and discussions on rethinking the global economic order and scaling up sharing in our...
News: Raise your voice for global sharing
In recent months, STWR has attended a number of conferences and published various papers in which we argue the necessity of sharing global resources, and...
Printer-friendly version