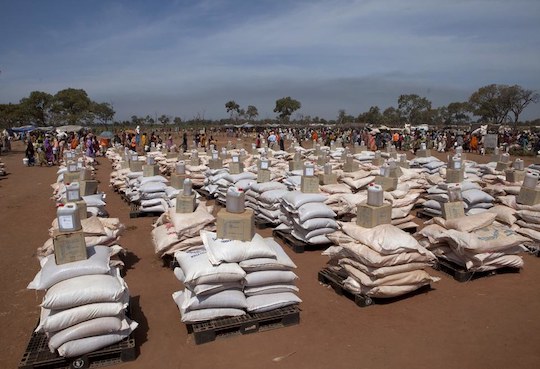 The number of people who are severely hungry in Sudan could double by September as a result of poor harvests, economic crisis, internal conflict and the Russian invasion of Ukraine, the UN has warned.

In a joint statement, the World Food Programme (WFP) and the Food and Agricultural Organisation said more than 18 million people could face extreme hunger over the coming months, up from about 9 million currently in need of aid.

“There are already worrying signs that access, affordability and the availability of food is shrinking for most people in Sudan, which is pushing more people deeper into poverty and hunger,” said Eddie Rowe, WFP’s country director in Sudan.

Hussien Khair el-Said, a father of six, and farmer in Wad-Ashana in North Kordofan, one of the regions experiencing an influx of people displaced by conflict, said he lost all his sorghum plants this season because the rains did not come. “People are really struggling here. They have reduced the meals they have a day,” he said. “I sometimes work as a teacher and was hoping my agriculture would help me. This year, we are facing a lot.”

Attempts to import cereals into Sudan could be hampered by the weakening national currency, which has fallen sharply since October’s coup, and the war in Ukraine. Sudan is dependent on wheat imports from the Black Sea region: about 50% of its wheat came from Russia last year. Any disruption to the flow will increase prices, which have already risen by 180% to $550 a tonne since the first quarter of 2021.

“The ripple effects created by the bullets and bombs landing in Ukraine will be felt far and wide, including here in Sudan, as families are set to suffer even further with basic meals becoming a luxury for millions,” said Rowe.

News: Afghanistan: Food insecurity and malnutrition threaten ‘an entire generation’
People in Afghanistan are today facing a food insecurity and malnutrition crisis of “unparalleled proportions”, according to the UN Resident and...
News: ‘Take from the hungry to feed the starving’: UN faces awful dilemma
Agencies forced to cut back aid in Yemen, Afghanistan, South Sudan and Ethiopia despite growing need as funds go to Ukraine.
Article: 6 in 7 people worldwide experience ‘high levels of insecurity’ – Why?
Safety and security are at the base of the ‘hierarchy of needs’ pyramid, second in importance only to life’s absolute necessities—air, water, food and...
News: UN food agency says 13 million Yemenis may face starvation
The head of the U.N. food agency has warned that 13 million Yemenis are headed for starvation due to a protracted civil conflict and a lack of funding for...
News: Acute food insecurity soars to five-year high
The number of people facing acute food insecurity and needing urgent life and livelihood-saving assistance has hit a five-year high in 2020 in countries...
Printer-friendly version