#MoveTheDate and declare your love for the planet!

The day humanity exceeds Earth's biocapacity this year, Earth Overshoot Day, falls on August 22, three weeks later than in 2019. The shift is due to the pandemic, but can the contraction happen by design, not disaster?

Back in 1970, the earth's biocapacity was more than enough to meet annual human demand for resources. But in the half century since, we have steadily outgrown our single planet. Humanity now consumes around 60% more than Earth can yield in a year, meaning we need 1.6 planets to sustain us.

In 2019, we had already spent our resource budget for the year by July 31, the earliest Earth Overshoot Day ever recorded by the Global Footprint Network, which has been calculating global and national ecological impacts for near three decades. In that time, humanity has overshot its biocapacity — defined as an "ecosystems' capacity to produce biological materials used by people and to absorb waste material generated by humans" — by a few more days each year.

But due to the global coronavirus lockdown, 2020 has bucked the trend. This year, Earth Overshoot Day has moved back by more than three weeks to August 22.

Projections point to almost 15% reductions in CO2 emissions (around 60% of the total footprint) in 2020 as a result of the pandemic-related slowdown in fossil fuel use across the transport, power, industry, aviation and residential sectors. The global Earth Overshoot calculation, which uses data from the likes of the International Energy Agency, also includes forest production, which dipped nearly 9%, and our food footprint, which was steady.

One planet misery or prosperity?

According to Mathis Wackernagel, founder and president of the Global Footprint Network, this year's contraction is welcomed. But he says the fact that it is accidental means it is not sustainable.

"The tragedy of this year is that the reduction of carbon emissions is not based on a better infrastructure such as better electricity grids or more compact cities," he told DW. "We need to move the date by design, not by disaster."

To meet the Intergovernmental Panel on Climate Change (IPCC) targets to limit warming to 1.5-2 degrees Celcius, the current decline in the emissions curve would have to continue at the same rate for the next decade, Wackernagel points out. At present, however, this is being achieved through economic and social suffering.

"Not doing anything, being stuck at home. That's not the kind of transformation we need. It's not lasting," Wackernagel said. 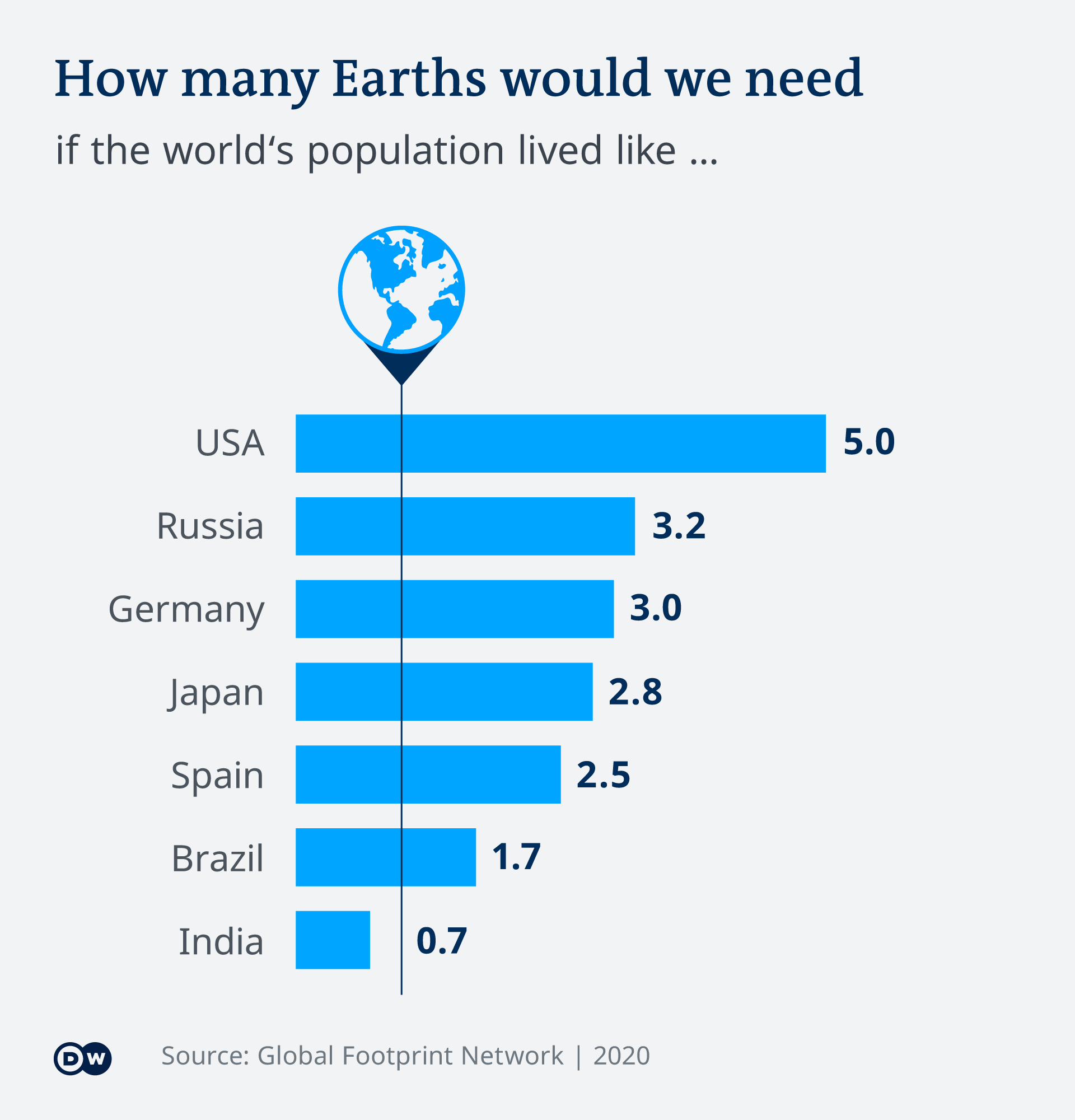 The goal must be to "systemically adjust to the physical budget we have available," added the Swiss-born Global Footprint Network founder and 2018 World Sustainability Award winner. "Do you want one planet misery or one planet prosperity?"

Wackernagel argues that the coronavirus is itself a reflection of ecological stress. "These pressures that we see like pandemics, like famine, like climate change, like biodiversity loss, they're all manifestations of an ecological imbalance," he said.

Lowering emissions for the benefit of all

A key side-effect of disaster-driven emission reductions is the fact that "the pain is going to be unevenly distributed," according Wackernagel. Marginalised groups, especially people of color, have been disproportionately affected by the pandemic's "huge economic impacts," said Sarah George, a senior reporter with Edie, a UK media company that promotes sustainable business practices.

Edie conducted its first Earth Overshoot webinar in 2019, with the aim of educating organizations to reduce their resource footprint through business models that are sustainable for everyone in the long-term.

George says this year's webinar on August 22 will also address the misnomer spread by some climate skeptics that a green, low-consumption future is only possible under the deprivations of a lockdown.

"They have used the situation to say that lockdown is 'what green campaigners want', and that we cannot enjoy things like international travel, economic growth, etc. in a green future," George told DW.

But post-lockdown, George says the goal is to create a one planet model through which businesses can couple "better economic and social outcomes" with "lower emissions and air pollution." 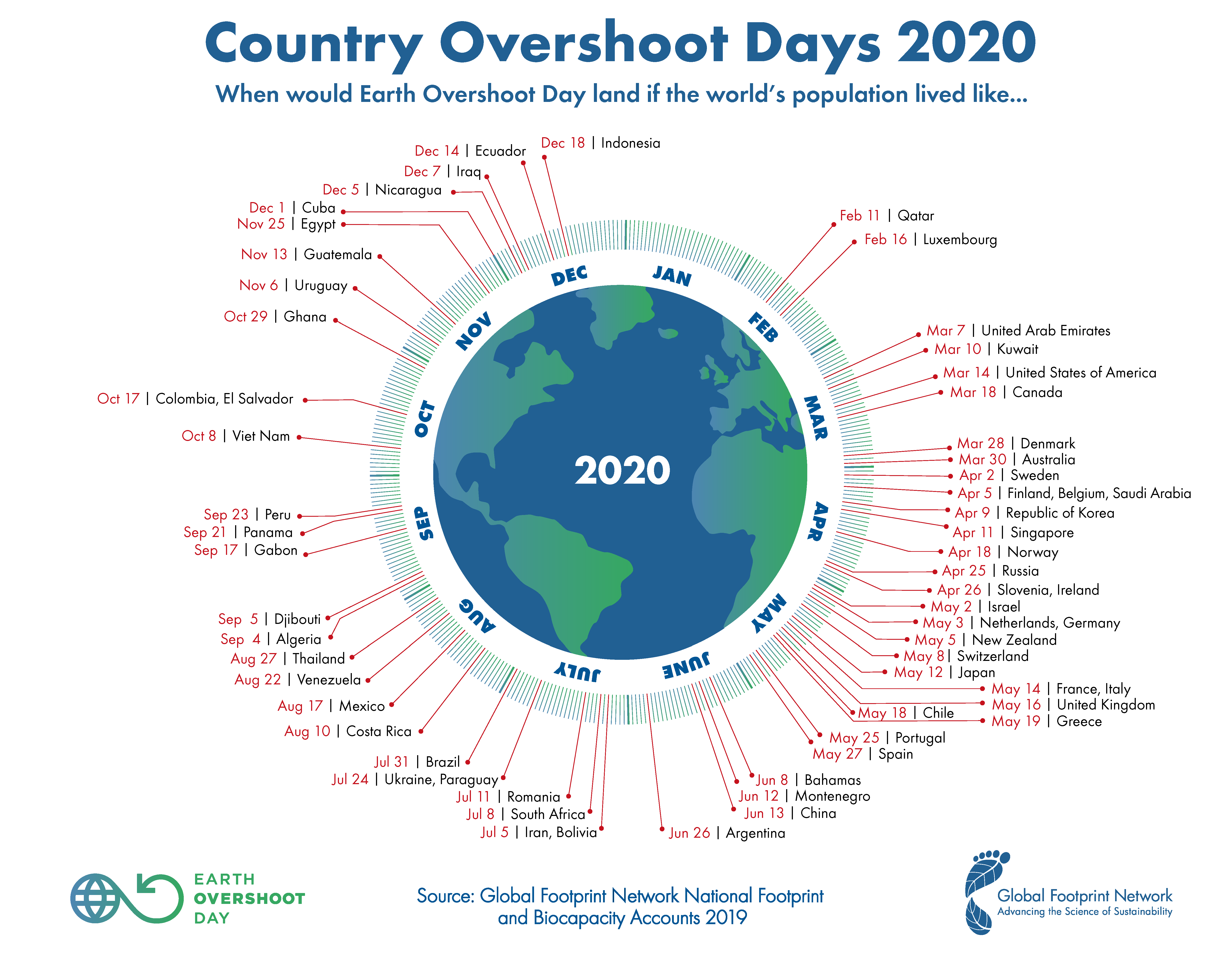 Earth Overshoot Day is calculated both globally and among individual countries, and reveals how developed nations are eating up the earth's biocapacity at a much faster rate.

In the US, where overshoot day falls on March 14 this year, citizens will require around five planets to maintain their outsized ecological footprint. Germany overshoots 50 days later on May 3, but still requires two planets.

"In Sweden we live as if we had about 4 planets according to WWF and Global Footprint Network, and roughly the same goes for the entire Nordic region," wrote climate activist Greta Thunberg last October when rejecting a Nordic Council environment award on the grounds that people in power should instead "listen to the current, best available science."

While Scandinavia is known for world-leading investment in renewable energy, and in rapid transport electrification in the case of Norway, Global Footprint Network data shows that individual consumption remains highly unsustainable. By contrast socialist outpost Cuba, which overshoots on December 1, is one of the few nations that's almost living within its means.

In Australia, a country regarded as a biocapacity giant due to its relatively small population and vast natural resources, is now running a biocapacity deficit for the first time in its history following the devastating fires of 2019-2020. The world's driest continent exhausted its ecological capacity on March 30 this year.

A fire-ravaged Australia has, according to a Global Footprint Network report, shown "how fragile biocapacity can be."

"With climate change and resource overuse, we place greater demand on ecosystems that are essential for the survival of not only humanity but wildlife species as well," wrote the authors. "Growing demand met by less robust biocapacity becomes a dangerous combination."

But any attempt to move the date towards one planet compatibility will require a systematic reduction of our ecological footprint in a way that also conforms with the strictures of climate science.

For Mathis Wackernagel, this must start with the individual, a principle that is also fundamental to fighting the coronavirus. "If you protect yourself, you protect everyone," he says.

Report: COVID-19 and the SDGs
A new briefing summarises the actual or likely impacts of the global coronavirus crisis on each of the 17 Sustainable Development goals. By Jens Martens,...
Article: Towards footprint justice: A fair earth share is a human right
How can we stop the overshoot of our planet’s capacity and reach fair sharing at the same time? The Dutch Footprint Group present their proposal based on...
Article: A new normal
"The pandemic has changed the game. We have the resources to build an economic model that doesn’t trash the planet and provides for all." STWR join the...
Blog: Could COVID-19 give rise to a greener global future?
The coronavirus pandemic is a wake-up call to stop exceeding the planet’s limits, write Sandrine Dixson-Declève, Hans Joachim Schellnhuber and Kate...
Printer-friendly version