Share The World's Resources and the British Film Institute screen ‘The End of Poverty?’

Share The World’s Resources and the British Film Institute screened the UK premier of ‘The End of Poverty?’ on 12th December 2009 at BFI Southbank, London. The film was followed by a lively panel discussion and Q&A session with leading voices on world poverty.

Directed by Philippe Diaz and produced by Cinema Libre Studio, ‘The End of Poverty?’ explores how the causes of poverty stem from an exploitative economic system developed through the colonial era and since perpetuated through unfair trade, debt repayment and unjust taxes on labour and consumption. Based on interviews with experts and footage of the poor in developing countries, the documentary makes the case that the current global economy was carefully built and maintained by free market policies, resource monopolies and structural adjustment programmes by the World Bank and International Monetary Fund that have left millions of people living on less than a dollar a day. The screening was well attended by non-governmental organisations, MPs, media representatives and members of the public, with over 400 guests filling the sold-out theatre.

Philippe Diaz drove home the message of the film by pointing out that poverty continues to rise and “we are 100 percent responsible for that because of the system we created”. He said: “If we are consuming 30 percent more than what the planet can regenerate... it simply means that for us, in the countries of the North to maintain this great lifestyle, this level of consumption and this level of waste, we will have to plunge more and more people below the poverty line in the countries of the South.”

In contrast, Clare Short remarked that the film was “incomplete” owing to its failure to highlight the role of “the greedy selfish elites of developing countries”. She said: “I’m not saying there isn’t a deep, Western policy [that is] historically exploitative, but you have to say why is this going on after so long? ...80 percent of the population of the world are being exploited. Now there’s more democracy across the world, it can’t just be our corporations and the World Bank and the IMF [that is to blame], there’s more to it than this.”

John Hilary of War on Want strongly endorsed the documentary’s perspective. He said: “It’s an amazing film, not just because... it shows you how poverty is perpetuated through the system of globalisation that we have in the world today, but it also says why. It actually gives you the ‘why’ behind the system [that creates] poverty, and that politics of poverty which I think is absolutely critical.”

Irene Khan said the film “showed two very important aspects of poverty; the systems, the history, the dynamic forces that keep people poor, but it also very powerfully projected the voices of the people.” She added: “The film showed very clearly how absent the poor are from any of the decisions that are being made which has a huge impact on their lives.  So that’s where I think we almost need a reframing of human rights in terms of participation of people in issues that affect their lives.”

Questions from the audience sparked a contentious debate over particular themes raised in the film and by the panellists. In particular, many challenged Clare Short on her statement regarding elitist governments in developing countries, to which she responded ”people who don’t want to be critical of the governments of the countries of the South are leaving a massive chunk of the story out of the picture”. Filmmaker Philippe Diaz defended his emphasis on colonial structures as opposed to poor governance in the South, pointing out that ”to do corruption you need a corruptee and a corruptor, and unfortunately we are the corruptor as usual”.

Many of the panellists emphasised the need for a greater mobilisation of the general public to change government priorities and end global poverty. While John Hilary argued that “supporting grassroots social movements in the South in their resistance to neoliberal globalisation and their ability to create alternatives is crucial”, Irene Khan emphasised the importance of “creating open societies where poor people can genuinely participate in decision making”.

Clare Short also stated: “People make their own history, and the people of the South are going to lead their own liberation, but through turbulent times. We’re going to be in trouble too and we’ll need new alliances and new movements. It’s going to be a hard but kind of exciting time in the sense that it will be in our hands to gather again and make something more decent, and the only way for any of us to have a future is to make a more sustainable, less consumerist, more equitable world order.”

Members of the panel later accompanied guests to the BFI’s Delegates Centre to continue the discussion and enjoy complimentary refreshments provided by STWR and the BFI. A number of organisations provided further information and campaigning material, including Share The World’s Resources, Amnesty International, War on Want, the World Development Movement, Fahamu Books, the New Internationalist, the Royal African Society, and the Institute of Race Relations.

The STWR team, including volunteers and interns, met with panellists and guests to discuss the issues raised in the film. At STWR’s stalls, postcards of the organisation's key messages were made available along with policy briefs and further information on economic sharing. STWR’s new publication, ‘Megaslumming’, was also available for purchase and sold a number of copies.

A full transcript of the panel discussion can be accessed here. Please visit our facebook page to view photos from the event. 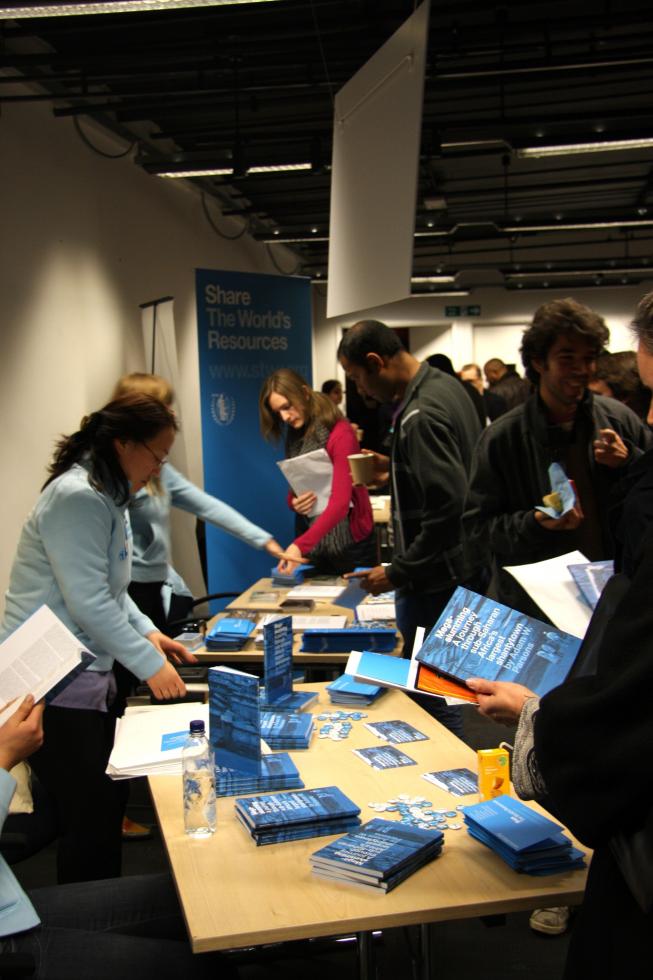 Article: The end of poverty? Expert panel discussion at UK screening
Expert panellists and film director Philippe Diaz discuss the structural causes of poverty and suggest possible solutions at the UK premiere of ‘The End...
News: UK screening: The End of Poverty? Think Again
Press release: The British Film Institute and Share The World’s Resources will be screening the award winning documentary ‘The End of Poverty?’ at the BFI...
Page: Join the global call for sharing
Sign the global call for sharing and add your voice to the growing demand for a fairer sharing of wealth, power and resources within and between countries...
Printer-friendly version