#SyriaConf2018 in Brussels must focus on aid, increased pledges and accountability 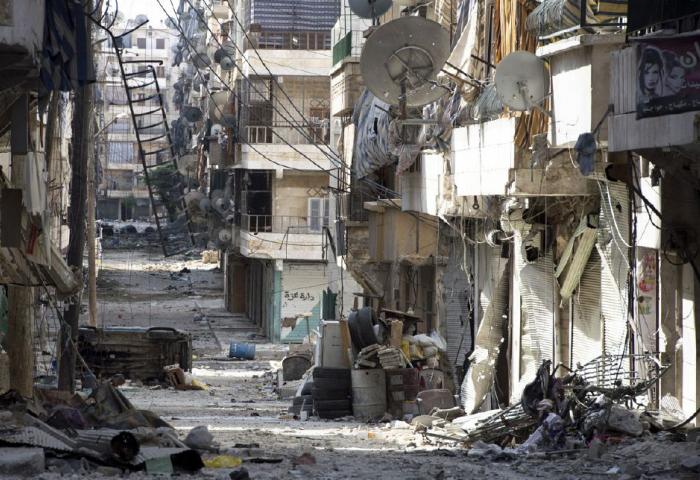 Donors and governments meeting Tuesday and Wednesday for the Brussels II conference must take the opportunity to bring change for the millions of vulnerable Syrians in their war-torn country and in the region by following through on previous commitments to protect displaced people and fund the aid response.

With 2017 considered one of the worst in the seven-year Syria crisis —and 2018 on track to be equally devastating for civilians—international aid agencies are warning that they will be unable to meet the staggering needs.

The aid response is just over 20 per cent funded, yet close to 700,000 people have been internally displaced by violence in Syria in 2018 alone, with continued attacks on civilians and critical infrastructure like schools and hospitals. Some 7.3 million Syrians are living in communities reporting explosive hazards.

Oxfam and 7 other humanitarian agencies report how access to aid has been systematically compromised and denied by the warring parties inside Syria, deliberately harming civilians and turning humanitarian life-savers into targets. In 2017, 47 of the 172 UN convoy requests (27.3 per cent) were approved by the government of Syria in full, a drop from 2016 when 117 requests were approved out of 258 (45.3 per cent).

Across the region 2.7 million Syrian children are still out of school. Lack of legal protection for millions of Syrians, inside and outside the country, continues to undermine commitments on aid, education and job creation. At the same time, hundreds of thousands of Syrians risk being forced to return to unsafe, explosive-ridden and devastated neighborhoods without basic services, or to where there is still active fighting.

Quotes from the aid agencies

Marta Lorenzo, Regional Director of Oxfam, said: "Politicians promise in haste but deliver at leisure. They need to make good on their promises to the people of Syria. At last year's conference resettlement of vulnerable refugees was described as a vital option but the number of refugees resettled has plummeted. Fewer than 3 per cent of Syrian refugees have resettled in rich countries – with the US accepting only 11 Syrian refugees this year."

Tom Krift, Save the Children’s Regional Director, said: “The latest data shows that despite of previous conference pledges to get all refugee children into school, a staggering one in three Syrian children are being denied their right to education. Better efforts are required to track policy and funding commitments to ensure they are meaningful and translate into changes for children on the ground.”

Carsten Hansen, Regional Director of the Norwegian Refugee Council, said: “There is a massive problem across the region of Syrians without legal status or the right documents, who can’t access aid or safety, education or jobs. There has been undeniable progress as a result of previous conferences, but more needs to be done in Brussels. We need action, not just talk.”

Mark Schnellbaecher, Regional Director Middle East, International Rescue Committee, said: “Active conflict has meant that for every Syrian returning home in the last year, three were newly displaced. Syria is not safe and is unprepared for the return of refugees. The conference must recognize this, commit to refugee rights and support Syria’s neighbors who have done so much already to host 5.6 million people.”

Arnaud Quemin, Mercy Corps country director for Syria, said: “Communities across Syria experience terrifying daily violence. For policy makers to sit in Brussels and say ‘this is the best we can do’ is shameful. Local relief groups are made up of neighbors helping neighbors, and they save lives on a daily basis. They are the key partners of all international aid organizations and a lifeline to their communities. They need our support."

Robert Beer, acting Syria director for CARE International, said: “Funding the aid response is critical, otherwise even more lives will be put in danger. But funding is only part of the picture – the systematic and deliberate blocking of aid inside Syria must end, and aid workers must be granted unimpeded access to civilians. We are talking about Syrian humanitarians who have been at the forefront of the aid response and should be given special status by all warring parties.”

Florence Daunis, Managing Director of Humanity & Inclusion, said: “The consequences of the use explosive weapons in populated areas are devastating. Physical rehabilitation, mental health and socio-economic needs amongst Syrians are vast. Humanitarian mine actors should be granted access to Syria to conduct activities that will allow communities to live in safety and dignity.”

1. Funding calculations made on the basis of combined commitments to the UN appeals for the Syria response (Syria regional refugee and resilience plan (3RP) and Syria Humanitarian Response Plan 2018), accessed from the UN Financial Tracking Service on 19 April.

2. For further information on NGOs recommendations for the Brussels conference see Promise to Practice: Following through on commitments to support the future of Syria and the region https://reliefweb.int/sites/reliefweb.int/files/resources/Promise%20to%20Practice_Online.pdf

News: Aid spending stagnates as rich countries shift focus from refugees to poor nations
Rich nations spent more on helping poor countries last year but less on refugees at home, leading to stagnation in overall aid expenditure - which remains...
News: 'Price of conflict is too high': hunger at crisis levels in eight countries
The number of hungry people living in conflict zones is rising, with eight countries recording crisis or emergency levels of food insecurity in at least a...
Report: World hunger is on the rise again
A UN report it reveals that in 2016 the number of chronically undernourished people in the world is estimated to have increased to 815 million, up from...
Article: Famine looms in four countries as aid system struggles to cope, experts warn
Famine is looming in four different countries, threatening unprecedented levels of hunger and a global crisis that is already stretching the aid and...
Printer-friendly version