Why share the planet’s resources? Let the children explain… 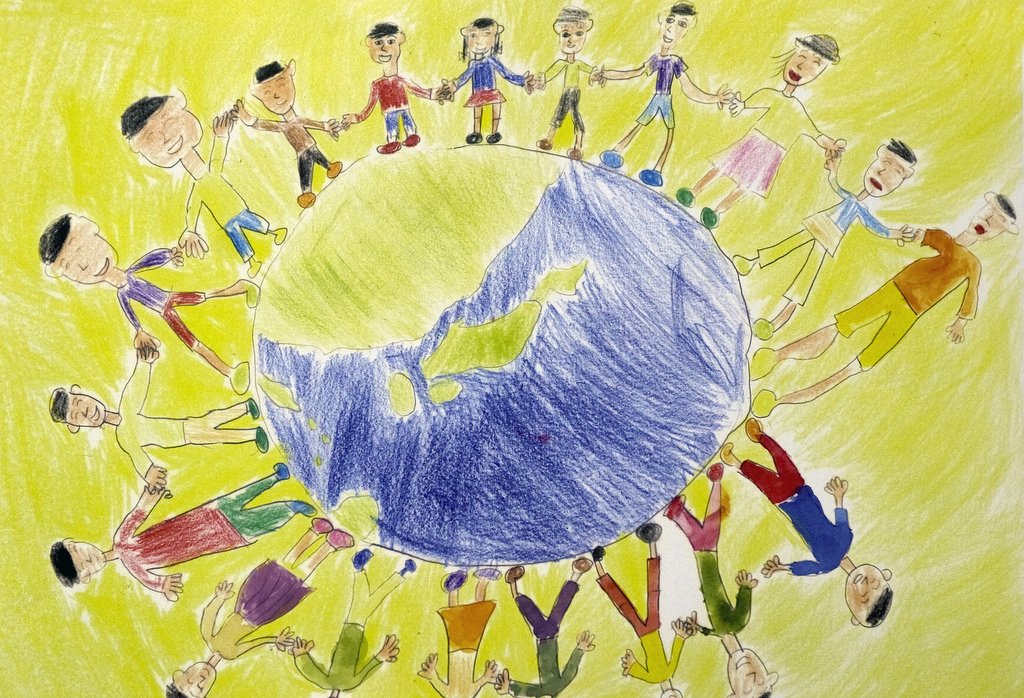 Unlike many politicians and business leaders, children as young as seven are quick to recognise that the principle of sharing holds the key to addressing pressing global issues such as poverty and inequality – and that governments should put these concerns at the very top of their agendas.

The principle of sharing is so deeply ingrained in the human psyche that even young children understand that failing to share with others is unfair and unacceptable. Although such a basic understanding of justice and equality has been instilled in our minds since childhood, the practice of sharing is increasingly difficult to observe in a political and economic context where it could have profound implications for the way we organise society. This is especially true at a time when inequality is on the rise, governments are failing to address global poverty, and the planet’s natural resources are being consumed at an unsustainable rate – mainly by the richest 20% of the world’s population.

It’s therefore notable that a growing number of schools are adopting curriculums that encourage students to discuss the need for sharing resources fairly and sustainably in relation to critical global problems. Once such school in London is St Mary Magdalene Academy, who recently invited STWR to organise a workshop for 7- and 8-year-old pupils to further explore sharing-related themes as part of their ‘Primary Years Program’ syllabus.

Through a combination of participatory activities, presentations, storytelling and discussions, STWR’s Sonja Scherndl engaged the children on a range of topics that are central to any discussion about sharing from a global perspective. For example, in order to highlight the injustice of not sharing resources fairly, the children were invited to participate in a cake lottery that could only be won by a single pupil. The game was used to help illustrate the extreme levels of inequality that are a feature of the modern world, where the top 1% of the world’s population now own as much wealth as everyone else combined.

The pupils also watched a short video about inequality, after which they were presented with a series of slides to illustrate what life is like for children living abroad who may not have access to the essentials that most people in the UK take for granted. The children were appalled to hear that such a large proportion of people around the world still live in poverty – a fact that made such an impact on them that most of the class reiterated it in their class feedback:

“My best part was when you showed the bedrooms. It’s so sad that one boy does not have a home.” - Bolu

“I learned a lot about the world and I am thankful for all the things I’ve got and I don’t need any more. That’s why we have to make our world…GREENER!” - Myriam

The International Baccalaureate study programme adopted by St Mary Magdalene Academy provides students of all ages with a global perspective on how the world works and is organised, and the course has a specific focus on ‘sharing the planet’. Over the course of the school year and across all subject groups, Phelisa Grindrod’s Year 3 pupils will produce a wide variety of work that reflects these core themes. So far, the students have explored a broad range of interconnected issues that pertain to the need for sharing wealth and resources on a global basis such as inequality, hunger, fair trade and environmental sustainability.

One of the aims for the Primary Years Program is to encourage students to become “active, caring, lifelong learners who demonstrate respect for themselves and others and have the capacity to participate in the world around them”. Despite their young age, the children proved their ability and willingness to rise to this challenge by writing letters to Prime Minister David Camron, rightly asking him to share the world’s resources as a foremost priority above all other governmental concerns. As one pupil wrote:

I am writing to you to make world poverty one of the government’s top priorities. Some people have lived in poverty all their lives. Surprisingly, there are an unacceptable amount of people being denied the basic necessities of life: food, water, medicine and fresh air. I think every person should have access to these basic needs … IS THIS FAIR? One of the reasons are that the world’s resources are not shared equally or fairly. Please could you make this a focus, please put looking for a solution at the top of your agenda.

Given the convergence of social, economic and environmental crises that confront humanity today, it’s inspiring to see pupils engaging with these concerns from a young age and calling on world leaders to promote sharing as a common sense solution to pressing global issues. Unfortunately, this simple and urgent message has yet to be taken seriously by those in positions of power and influence. Perhaps it would help if policymakers and business leaders consider going back to school – if only to hear the opinions of these young and truthful minds who instinctively recognise that the principle of sharing holds the key to creating a more equal and sustainable future.

Report: A primer on global economic sharing
In an increasingly unequal and unsustainable world, governments must urgently move beyond the restrictive political and economic ideologies of the past...
Page: Global poverty and inequality
World leaders may suggest that a great deal is being done already to prevent extreme deprivation, but this is far from the reality. Unless governments...
Article: #GlobalGoals? The truth about poverty and how to address it
It's high time UN agencies and the mainstream media acknowledge the true scale of global poverty and engage in a long overdue public debate on how...
Page: Sign the global call for sharing
If you agree with the need to catalyse a global movement of citizens that embrace sharing as a common cause, please sign and promote STWR’s 'global call...
Printer-friendly version