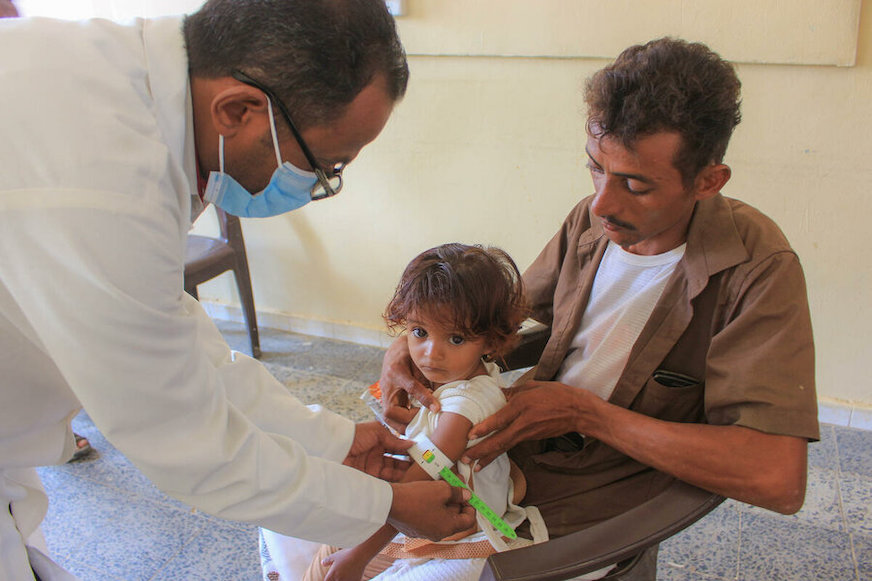 Nearly 50,000 people in Yemen are already living in famine-like conditions with 5 million just a step away.

David Beasley, WFP’s Executive Director, will press home the organization’s fears for the country at a high-level fundraising conference, hosted by the UN with the governments of Switzerland and Sweden.

The UN estimates nearly 250,000 people have died during Yemen’s six-year war, including more than 131,000 people from the indirect consequences of conflict, such as lack of food, health services and infrastructure — the situation in the country is worse now than it has been at any point since 2015.

With the COVID-19 pandemic still in full swing, the international community cannot wait for an official famine classification in Yemen to act.

A famine classification in Yemen may never come because of the heavy burden of evidence required. It would have to be proven that 20 percent of households face an extreme lack of food; 30 percent of children suffer from acute malnutrition; and two people for every 10,000 are dying each day due to outright starvation or the interaction of malnutrition and disease.

Yet in conflict zones — where communications are disrupted, communities are displaced and humanitarian access is restricted — locking down the facts of a fast-deteriorating situation is a huge challenge.

No one doubts that people are already dying and food insecurity will continue to rise without immediate humanitarian support.

WFP is keen to stress to donor governments that Yemen needs peace — only peace can break the corrosive cycle of hunger and conflict that has stalked the country for six years.

Progress towards peace requires urgent action to protect civilians, provide emergency assistance, secure humanitarian access and support an economy which has shrunk by half since the start of the conflict.

WFP needs at least US$1.9 billion in 2021 to provide the minimum amount of food assistance needed to prevent famine—to maintain operations through to July, it needs an immediate injection of US$482 million. Without this, from June, WFP may have to cut nutrition support to 1.1 million children and mothers, while 5 million people may face cuts to emergency food assistance in May.

Right now, around 8 million people receive WFP food assistance on alternate months, instead of monthly. This has been the case since April 2020 because WFP simply did not have sufficient funds. Cuts, in turn, have contributed to rising hunger levels, coming on top of continued conflict, displacement, rising food prices and a declining currency – all of which hit worrying new peaks in 2020.

These funds are being used to reach the most food insecure people in areas where death and starvation are already a reality. But this is not enough for reach all the people in need this year.

Until 2019, WFP received around 70 percent of funds from three donors — the US, Saudi Arabia and UAE. They increased their contributions each year as conflict pushed more and more families into crisis. This allowed WFP to scale up to support increasing needs, going from supporting around 1 million people in 2015 to nearly 13 million in 2019. This humanitarian scale-up — one of the largest in recent history – prevented a famine in 2019.

In 2020, however, WFP received around half of funds needed. Now it hopes other donors will give at similar levels to previous years.

The pledging conference will also be attended by António Guterres, Secretary-General of the United Nations, while Sir Mark Lowcock, UN Under-Secretary-General for Humanitarian Affairs and Emergency Relief Coordinator, will be moderating.

News: Famine in Yemen could become one of worst in living memory, UN says
Yemen is sliding fast toward what could become one of the worst famines in living memory, the UN’s top emergency relief official has warned.
News: Famine may be unfolding 'right now' in Yemen, warns UN relief wing
The United Nations relief wing on Friday warned of famine-like conditions unfolding in Yemen, as a blockade on aid and other essential goods by a Saudi-...
News: The people of Yemen are being subjected to deprivation, disease and death as the world watches
In a statement to the Security Council, the head of the UN's Office for the Coordination of Humanitarian Affairs (OCHR) urges the international community...
News: Yemeni children are trapped in 'worst humanitarian disaster in modern history'
Nearly four out of five children in Yemen are now in need of immediate humanitarian assistance, leading humanitarian groups announced in a joint statement...
Article: Why Congress must vote on the United States’ role in Yemen
Few Americans know that the U.S. military is making the crisis in Yemen worse by helping one side in the conflict bomb innocent civilians. We believe that...
Printer-friendly version