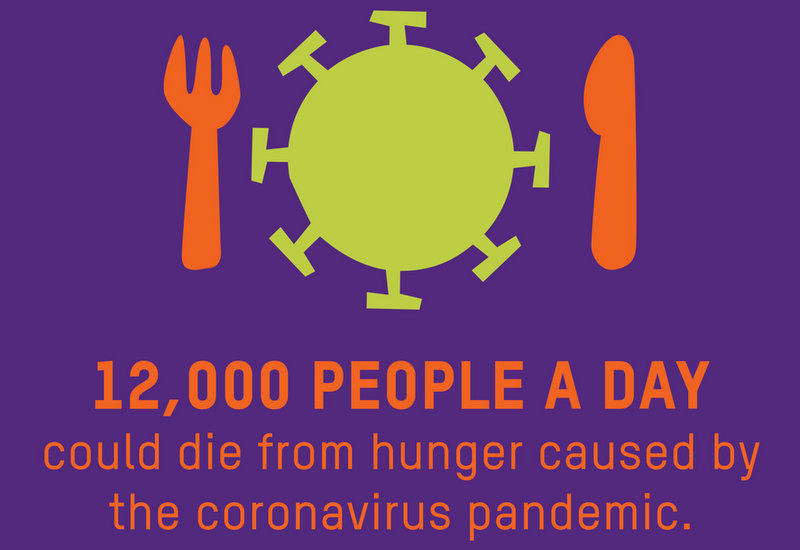 A new Oxfam briefing warns that as many as 12,000 people could die per day by the end of the year as a result of hunger linked to COVID-19, potentially more than could die from the disease.

‘The Hunger Virus,’ warns that 121 million more people could be pushed to the brink of starvation this year as a result of the social and economic fallout from the pandemic, including through mass unemployment, disruption to food production and supplies, and declining aid.

“COVID-19 is causing us a lot of harm. Giving my children something to eat in the morning has become difficult,” said Kadidia Diallo, a female milk producer in Burkina Faso. “We are totally dependent on the sale of milk, and with the closure of the market we can’t sell the milk anymore. If we don’t sell milk, we don't eat.”

The briefing reveals the world’s 10 worst hunger hotspots, places such as Venezuela and South Sudan where the food crisis is most severe and getting worse as a result of the pandemic. It also highlights emerging epicenters of hunger – middle income countries such as India, South Africa, and Brazil – where millions of people who were barely managing have been tipped over the edge by the pandemic.

“COVID-19 is the last straw for millions of people already struggling with the impacts of conflict, climate change, inequality and a broken food system that has impoverished millions of food producers and workers,” said Oxfam America President Abby Maxman.

In Brazil, for instance, millions of poor workers, with little in the way of savings or benefits to fall back on, lost their incomes as a result of lockdown. Only 10 percent of the financial support promised by the federal government had been distributed by late June with big business favored over workers and smaller more vulnerable companies.

In India, travel restrictions left farmers without vital migrant labor at the peak of the harvest season, forcing many to leave their crops in the field to rot. Traders have also been unable to reach tribal communities during the peak harvest season for forest products, depriving up to 100 million people of their main source of income for the year.

The United States is not immune to this hunger crisis. The pandemic obliterated systems that had, for years, kept millions one small step away from poverty and food insecurity. Countless businesses shuttered, leaving millions unemployed and struggling to pay bills. Schools closed, removing reliable sources of breakfast and lunch for millions of students. The food chain faltered—from produce fields to meat plants--causing prices to rise. It’s estimated that food insecurity rates in the United States have doubled.

“The awful truth is that food insecurity is exploding here in our own backyard,” said Maxman. “Every town has people who are going to bed hungry right now. Those who were on the edge before are now struggling to stay afloat. In Mississippi, nearly a quarter of all residents are experiencing food insecurity; in Louisiana, over a third of all children are facing empty cupboards.”

In every region in the world, women, and women-headed households, are more likely to go hungry. Women are already vulnerable because of systemic discrimination that sees them earn less and own fewer assets than men. They make up a large proportion of groups, such as informal workers, that have been hit hard by the economic fallout of the pandemic, and have also borne the brunt of a dramatic increase in unpaid care work as a result of school closures and family illness.

“Governments can save lives now by fully funding the UN’s COVID-19 appeal, making sure aid gets to those who need it most, and cancelling the debts of developing countries to free up funding for social protection and healthcare. To end this hunger crisis, governments must also build fairer, more robust, and more sustainable food systems, that put the interests of food producers and workers before the profits of big food and agribusiness,” said Eric Muñoz, Senior Manager Food and Climate Justice, Oxfam America.

Since the pandemic began, Oxfam has reached 4.5 million of the world’s most vulnerable people with food aid and clean water, working together with over 344 partners in over 60 countries. We aim to reach a total of 14 million people by raising a further $113 million to support our programs.

Report: UN envoy condemns failed global poverty eradication efforts
Global poverty is rising, directly contradicting the mainstream wisdom that it is being eradicated, according to a new report to the UN. States are...
Article: Global poverty: coronavirus could drive it up for the first time since the 1990s
The global pandemic could push half a billion people into deeper poverty on some counts and lead to a new COVID-19 apartheid era, warn Andy Sumner,...
News: 'Unimaginable double emergency': Record high of nearly 80 million people forcibly displaced worldwide amid pandemic
"These numbers should serve as a wake-up call to the international community on the human cost of war, and the social and economic implications...
News: World faces worst food crisis for at least 50 years, UN warns
The world stands on the brink of a food crisis worse than any seen for at least 50 years, the UN has warned as it urged governments to act swiftly to...
Printer-friendly version