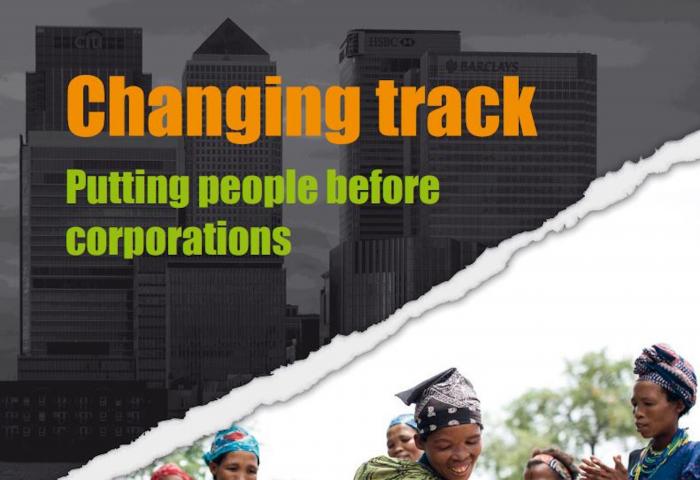 Every year, governments are diverting $1 trillion dollars away from people and public services into the hands of big companies, whilst across the world, hundreds of millions of people are denied their basic rights.

A new report by Health Poverty Action, Changing track: putting people before corporations, calculates that over $1 trillion (or a million million) is being diverted by governments each year. That’s enough to triple the money spent on healthcare for half the world’s population or cancel all government debt of impoverished countries!

Whilst people’s rights are denied everywhere, it is often people in the World’s poorest countries that face the greatest denial of their rights, while big companies in Europe and North America get richer and richer.

It doesn’t have to be this way – poverty and poor health are created by choices made by those in power. The time has come for a fundamental change, where governments prioritise the health and well-being of their populations in order to fulfil every person’s human rights.

We call on governments to redefine their priorities and focus on what matters – the health and wellbeing of their citizens; repair the damage done and stop companies from being able to violate human rights; and redistribute wealth to all citizens.

Around the world, we are already witnessing the successes of people who are fighting back. From the triumph of communities in Ecuador in getting the government to ban metallic mining to resisting resource theft by the Moroccan and European governments in Western Sahara, communities and campaigners all across the world are taking back power from corporations. Their experiences remind us that an alternative is not only possible, but it is happening right now!

Article: Squeezing the state: Corporate influence over tax policy and the repercussions for national and global inequality
Reducing inequality is one of the central pledges of the SDGs, appearing as a stand-alone goal (SDG 10) and as a cross-cutting commitment to “leave no one...
Article: World health and international economic sharing
Poverty and social conditions are widely acknowledged to be the major causes of ill health in developing countries. This report explains how greater...
Blog: Corporations running the world used to be science fiction - Now it's a reality
The power of corporations has reached a level never before seen in human history, often dwarfing the power of states. That is why civil society...
Article: Tax evasion isn’t just for the west: it conspires to keep Africa poor too
A new report reveals how western banks and governments turn a blind eye to billions of pounds’ worth of wealth, generated across west Africa, that is...
Article: Here's why donating £2 a month cannot possibly end poverty
To stop global inequality, aid agencies must ramp up their campaigns against the issues – such as unjust trade deals and climate change – that help it...
Printer-friendly version