As global population grows, ecological threats and armed conflict could displace over 1 billion people by 2050 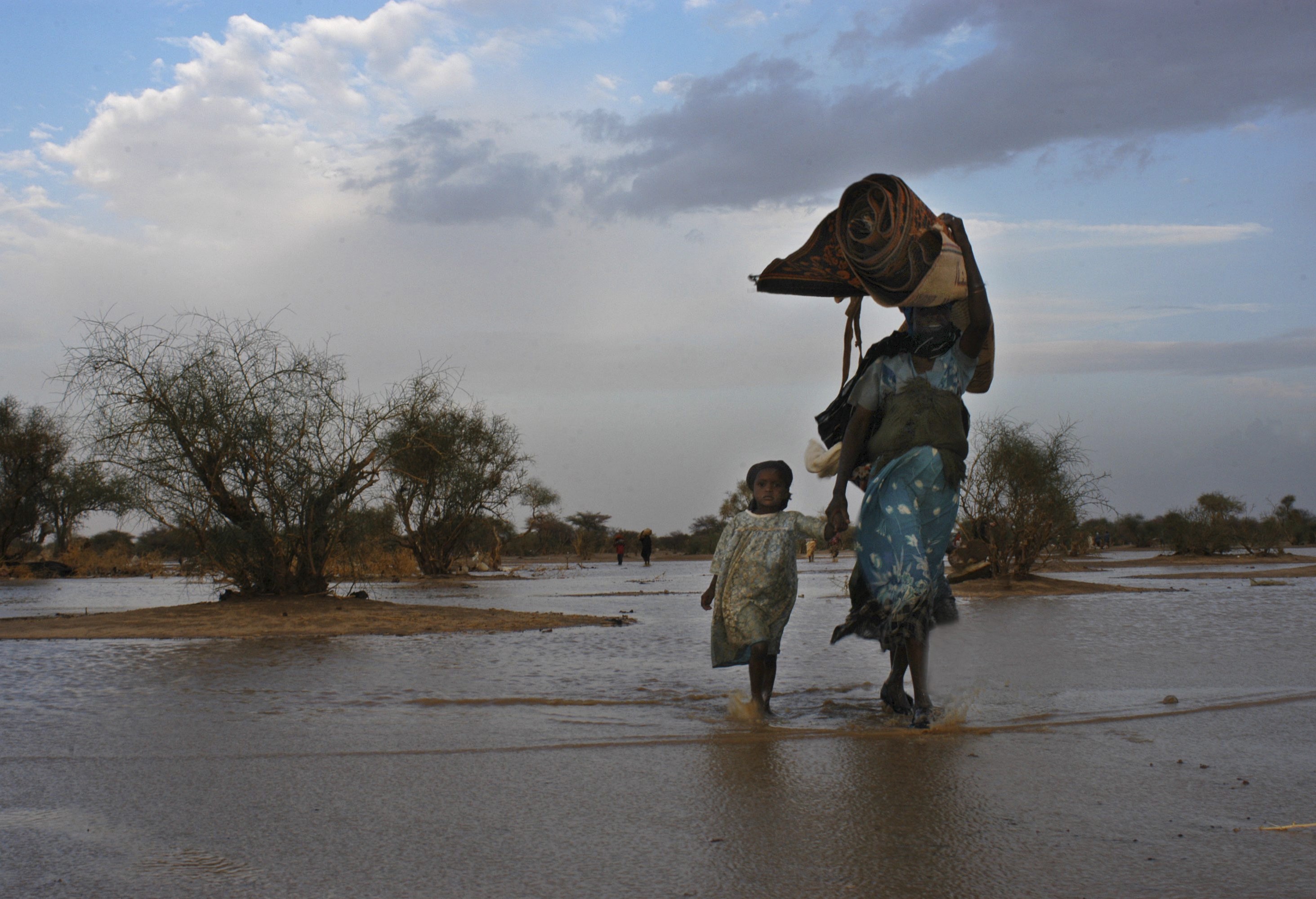 An analysis released Wednesday by an international think tank warns that as the world's population continues to climb toward and possibly surpass 10 billion by 2050, ecological disasters and armed conflict could forcibly displace roughly 10% of humanity—or about 1.2 billion people. Jessica Corbett at Common Dreams reports.

The inaugural Ecological Threat Register (ETR) was published by the Sydney-based Institute for Economics & Peace (IEP), known for producing the Global Peace Index and Global Terrorism Index. The new report (pdf) analyzes the risks of population growth, water stress, food insecurity, droughts, floods, cyclones, and rising temperature and sea levels as well as the degree to which countries and territories worldwide are prepared to handle extreme ecological shocks in the coming decades.

Based on resource scarcity and natural disaster threats, the ETR identifies "clusters of ecological hotspots" that "are particularly susceptible to collapse": the Sahel-Horn belt of Africa, from Mauritania to Somalia; the Southern African belt, from Angola to Madagascar; and the Middle East and Central Asian belt, from Syria to Pakistan.

Within these three zones, the ERT designates Iran, Kenya, Madagascar, Mozambique, and Pakistan as the "most fragile countries," explaining that they are all "broadly stable now but have high exposure to ecological threats and low and deteriorating Positive Peace, which means they are at a higher risk of future collapse." Positive Peace is a framework developed by IEP that the group has previously defined (pdf) as "the attitudes, institutions, and structures that create and sustain peaceful societies.”

Afghanistan, Central African Republic, Iraq, Syria, and Yemen have ongoing conflicts and are "highly exposed to ecological threats," meaning they "are already trapped in a vicious cycle where competition for scarce resources creates conflict and conflict in turn leads to further resource depletion," the report says. "The world's least resilient countries, when faced with ecological breakdowns, are more likely to experience civil unrest, political instability, social fragmentation, and economic collapse.”

On a global scale, 34% of countries "will face catastrophic water stress and 22% catastrophic food insecurity by 2050," the ETR warns. "Catastrophic risks" can result in substantial displacement or increase undernourishment due to "their impact being severe enough to damage the physical infrastructure, the economic foundations, or the social order in a country.”

The report's release comes not only amid a pandemic that has infected more than 27.6 million people and killed nearly 900,000 around the world, but also as communities are enduring the devastating impacts of human-caused global heating, such as the heatwave and wildfires that are tearing through the western United States. The World Meteorological Organization warned Wednesday that the planet is rapidly heading toward an end-of-century temperature threshold of the Paris climate agreement.

"Ecological threats and climate change pose serious challenges to global peacefulness," IEP founder and executive chairman Steve Killelea said in a statement Wednesday. "Over the next 30 years lack of access to food and water will only increase without urgent global cooperation. In the absence of action civil unrest, riots and conflict will most likely increase. Covid-19 is already exposing gaps in the global food chain.”

Many of the nations facing the greatest ecological threats—from fires to flooding and extreme weather events like cyclones—are also expected to see their populations significantly increase over the next three decades, according to the ETR. Examples include Angola, Burkina Faso, Nigeria, and Uganda, which already have difficulties addressing ecological threats, high poverty rates, resource scarcity issues, and low Positive Peace rankings.

"This will have huge social and political impacts, not just in the developing world, but also in the developed, as mass displacement will lead to larger refugee flows to the most developed countries," said Killelea. "Ecological change is the next big global threat to our planet and people's lives, and we must unlock the power of business and government action to build resilience for the places most at risk.”

News: Pandemic delays Earth Overshoot Day by three weeks
The day humanity exceeds Earth's biocapacity this year, Earth Overshoot Day, falls on August 22, three weeks later than in 2019. The shift is due to the...
Report: COVID-19 and the SDGs
A new briefing summarises the actual or likely impacts of the global coronavirus crisis on each of the 17 Sustainable Development goals. By Jens Martens,...
News: World faces worst food crisis for at least 50 years, UN warns
The world stands on the brink of a food crisis worse than any seen for at least 50 years, the UN has warned as it urged governments to act swiftly to...
Article: Towards footprint justice: A fair earth share is a human right
How can we stop the overshoot of our planet’s capacity and reach fair sharing at the same time? The Dutch Footprint Group present their proposal based on...
Printer-friendly version