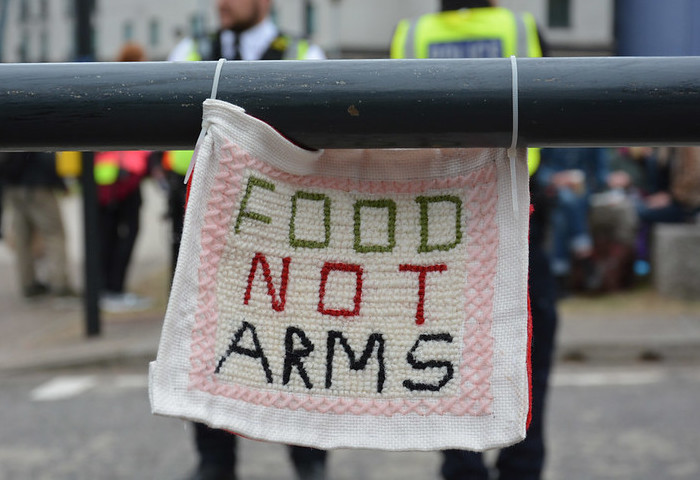 Tipping Point North South has pulled together its various military spending strands under one new banner: Transform Defence for Sustainable Human Safety is a project comprising a number of elements including the Five Percent Proposal and the case that military spending is an urgent international development issue; the global military’s impact on climate change and human insecurity; the absence in UN processes of the global military’s emissions accounting; and its Green New Deal Plus.

Transform Defence for Sustainable Human Safety ​describes the paradigm shift we need for all defence, security​, foreign and international development​ policies​ in a climate changed, post-pandemic world. It challenges NGOs and policy-makers alike to undertake brave discussion about redefining and re-making foreign and defence policy.

The two reports detail the staggering cost of military spending to people and the planet.

Together, the reports argue that the US$1.9 trillion[2] spent globally each year on the world’s military delivers nothing to defend citizens facing these twin threats. Five years after the Paris Climate Conference, it is time to add the global military’s carbon footprint to the ‘net zero’ debate. The reports call for an assessment of the accountability, efficacy, relevance and value for money of our global military to the threats we face could not be more timely as lives and livelihoods worldwide are destroyed by a foreseen yet completely unaddressed ‘Tier 1’ security threat – pandemic.

For example, Indefensible: The true cost of the global military to our climate and human security estimates that if the world’s militaries were combined together as a single country, they would be the 29th biggest oil consumer in the world, just ahead of Belgium or South Africa. To put it another way, this is half the oil consumption of the world’s 5th biggest economy, the UK. Runaway global military spending enables the world’s militaries to remain the biggest institutional users of fossil fuels in the world and to be major driver for climate change. A carbon-neutral world demands we fully decarbonise our militaries.

“[This report] is an important addition to the growing evidence on the significant role of military emissions in causing climate change. Using a novel methodology, it widens the analysis to all the world’s militaries… it connects the dots between military fuel use, military spending, war, and the burden of climate change on development,” says Neta C. Crawford, Professor and Chair of Political Science Boston University and Co-Director of the Costs of War Project. “… it [also] offers important solutions. It is essential reading for all those concerned with climate change and the path to a sustainable and secure future.”

And as nations update their 2020 Nationally Determined Contributions,[3] the Transform Defence reports call for NGOs and policy-makers alike to undertake a practical, imaginative, brave discussion about redefining and re-making defence policy so it is truly fit-for-purpose and accords the same level of attention, urgency and resources to pandemic and climate change as is granted to conventional security threats.

“[TPNS’s] Global military spending, sustainable human safety and value for money report … demonstrates how deeply inadequate the concept of ‘national security’ is in light of the ongoing pandemic and the rapidly unfolding threats of climate change,” says Jen Maman, Senior Peace Adviser, Greenpeace International. “It asks what we can learn by looking at the policy and spending priorities of governments, and argues that, unquestioned and at our peril, governments are massively outspending on weaponry compared to the climate emergency or global health protection.’’

As we end this very difficult year and look ahead to 2021, we very much hope this new project can add value to the post-Covid recovery debate and in tandem with the discussions leading up to the Glasgow hosted COP in 2021, make the case that the time has come to transform defence for sustainable human security.

Indefensible: The true cost of the global military to our climate and human security also estimates that the global military and defence industry combined accounts for at least 1% of total global greenhouse gas emissions. This is larger than the annual greenhouse gas emissions of the entire country of Italy and not much smaller than the total GHG emissions of the UK and France respectively.

For comparison, international civil aviation is responsible for around 1.3% of global GHG emissions and is a climate change focus of public and political attention. Meanwhile, the global military-industrial complex accounts for a similar  amount of greenhouse gas emissions as civil aviation but it receives no such scrutiny.

Global military spending, sustainable human safety and value for money report uses the F35 fighter jet as a case study to illustrate this imbalance. Had the US$2 trillion estimated global total lifetime cost of F-35 programme been applied to the activities/areas/agencies below this is what the global community would be receiving instead:

[1] Both reports build on major work published earlier: the USA Pentagon emissions report “Pentagon Fuel Use, Climate Change, and the Costs of War,” by Professor Neta Crawford of the Costs of War Project; UK military emissions “The Environmental Impacts of the UK Military Sector,” by Dr. Stuart Parkinson, Scientists for Global Responsibility; and “Hidden Carbon Costs of the ‘everywhere war’: Logistics, Geopolitical Ecology, and the Carbon Boot-print of the US Military,” by Oliver Belcher, Patrick Bigger, Ben Neimark, and Cara Kennelly.

News: UN treaty banning nuclear weapons set to enter into force in January
In what leading campaigners are describing as “a new chapter for nuclear disarmament”, the ratification of the Treaty on the Prohibition of Nuclear...
Report: A pandemic pivot
A new book lays out a progressive agenda for the post-COVID era, which relies on a global Green New Deal, a serious shift of resources from the military...
Blog: Time to put an end to the nuclear age
The risk of nuclear war is the greatest it has been since the height of the Cold War. But there’s also been incredible progress in the past couple of...
Article: Decolonizing the United Nations means abolishing the permanent five
The only way forward for the United Nations is to acknowledge the key difference between 1945 and 2020 - decolonization - and abolish the permanent...
Article: The key to global security? It’s not just about security
In his 900th column for openDemocracy, Paul Rogers shows how economics and climate demand a new approach to international security.
Printer-friendly version