Inequality hurts all of us.jpg 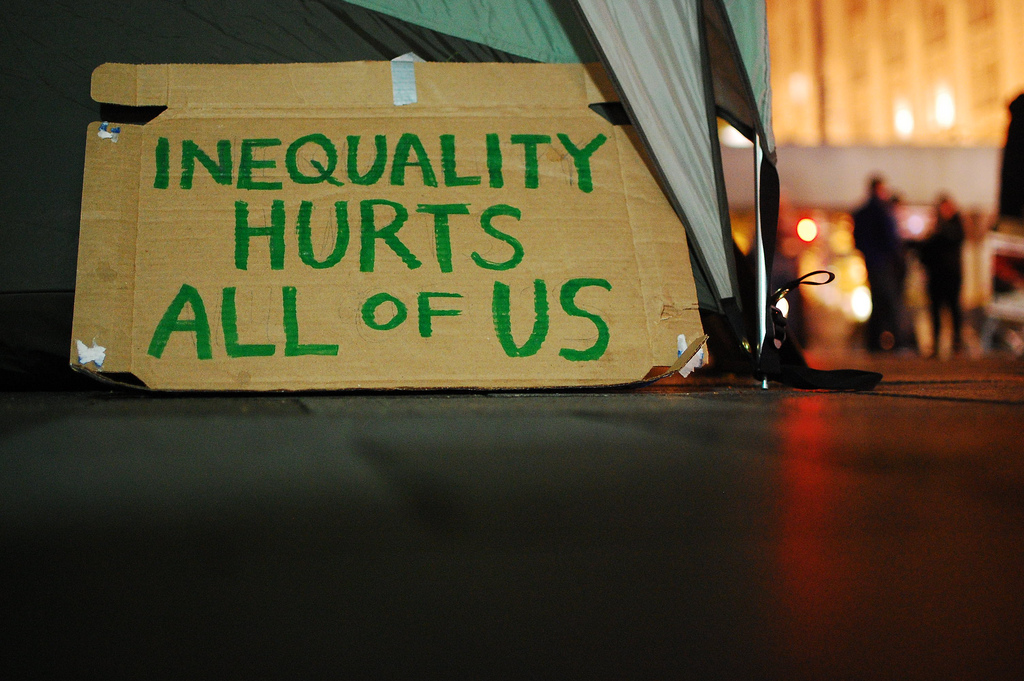 A new report by Share The World’s Resources demonstrates how governments could mobilise over $2.8 trillion every year to bolster the ‘global sharing economy’ and prevent life-threatening deprivation, reverse austerity measures and mitigate the human impacts of climate change.

The report argues that governments have pursued policies over several decades that undermine the sharing economy - systems of welfare and redistribution that have been established over many generations to protect the poor and vulnerable. As a result, humanity is now facing what can only be described as a global emergency.

Every day, over 40,000 people needlessly lose their lives from poverty and many millions more live in a life-threatening state of destitution. Austerity measures are widening existing inequalities and causing hardship for millions of people across the world. At the same time, ecological turmoil is triggering natural disasters that are already devastating communities and escalating poverty, displacement and deprivation.

Dealing with the structural causes of this global emergency will require wholesale reform of the world economy on a scale never before attempted. But as an immediate response, the international community has the means to mobilise staggering amounts of finance to end poverty-related deaths and secure basic human needs as a foremost global priority.

The report demonstrates in practical terms how governments could harness over $2.8 trillion each year to reverse policies of economic austerity, prevent life-threatening deprivation and mitigate the human impacts of climate change. Any one of the policy options highlighted - from tax and debt justice to redirecting perverse government subsidies - could mobilise tens if not hundreds of billions of dollars to strengthen and scale up the sharing economy both nationally and globally.

The responsibility for change rests with us all

Share The World's Resources (STWR) argues that governments already have at their disposal the institutional structures, mechanisms and expertise required to utilise these additional financial resources. However, we lack a sufficient level of public support across the world to overcome the political and commercial barriers to implementing these critical measures.

In light of the current political reality, implementing even modest proposals such as closing tax havens, diverting perverse subsidies or reducing military spending will require massive grassroots pressure. The report argues that mobilising world public opinion to strengthen and scale up the ‘global sharing economy' must therefore be an immediate priority for campaigners and engaged citizens in all countries.

STWR says: "Sharing the world's vast financial resources through the measures outlined in this report is only the very first step in a process of global reform. These ameliorative measures require governments to make relatively minor policy changes in order to better utilise what they already have at their disposal: abundant financial resources, capacity and expertise.

"But if governments use the money effectively, these simple reforms could yield major gains for humanity by significantly reducing needless poverty-related deaths, reversing austerity measures and enabling poorer countries to mitigate and adapt to climate change. Achieving these goals would mark a tremendous leap forward for the international community and pave the way for more substantial reforms that must urgently follow.

"Our report calls on all citizens to make these priorities their own - from ordinary people who have never campaigned before, to experienced activists and the new wave of protestors in the Occupy, Indignado and student movements. It is imperative that millions more people recognise what is at stake and take the lead as proponents for change."

1. Share The World's Resources (STWR) campaigns to strengthen and scale up the sharing economy in all its forms. We advocate for an international program of emergency relief to prevent life-threatening deprivation and end poverty-related deaths as a foremost global priority. We also call for extensive reforms to the world economy to ensure a fairer sharing of wealth, power and resources within and between nations.

2. The sharing economy is a broad term used in the report that encompasses the many systems of sharing and redistribution that exist locally, nationally and globally - whether facilitated by individuals, states or other institutions. It is concerned with the social, economic, environmental, political and spiritual benefits of sharing both material and non-material resources - everything from time and knowledge to money and natural resources. In comparison, the global sharing economy refers specifically to systems of sharing and redistribution that are international or global in nature - whether facilitated directly by people and governments or by global institutions like the United Nations. It refers to the many methods by which the international community can share their financial, technical, natural and other resources for the common good of all people.

3. If taken together, the policy recommendations in the report could enable the international community to mobilise more than $2.8 trillion within a short number of years, money that governments should use to strengthen and scale up the sharing economy both nationally and globally. The 10 policies are: