Letting “peace and love flow” for a world in crisis 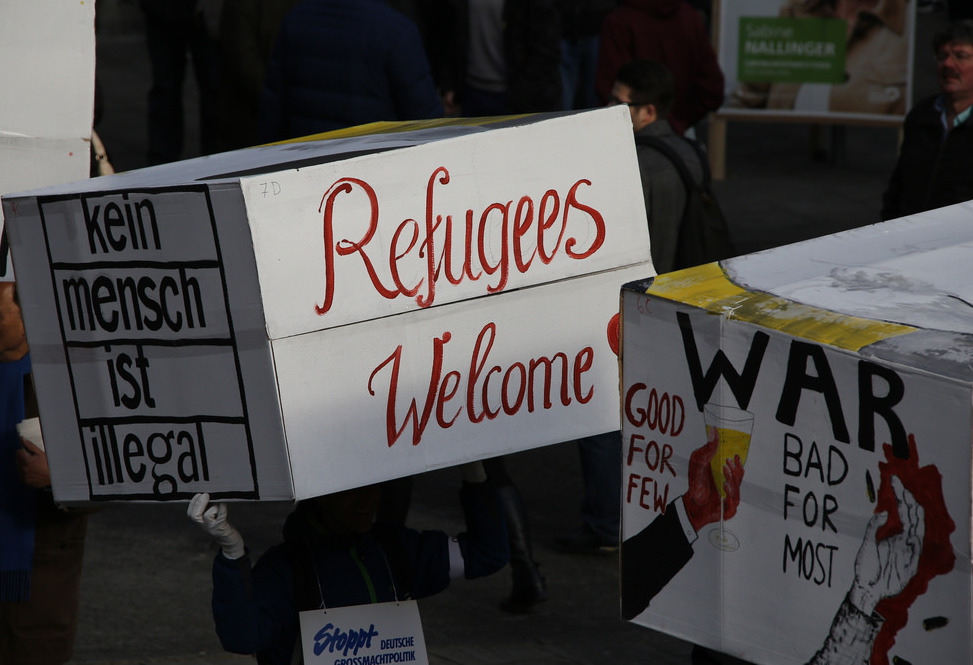 As part of STWR’s ‘global call for sharing’ campaign, we periodically highlight the growing public debate on the need for wealth, power and resources to be shared more equitably both within countries and internationally. This debate is becoming more prominent by the day, although it is often framed in an implicit context without directly acknowledging how the principle of sharing is central to resolving today’s interlocking crises.

In this light, the editorial below illustrates some of the many and diverse ways in which a call for sharing is being expressed, whether it’s by campaigners, activists, progressive economists, academics or anyone else. To learn more about STWR’s campaign, please visit: www.sharing.org/global-call

In January, the case for sharing the world’s wealth was given major prominence at the annual gathering of the super-rich in Davos. Although the issue of inequality was noticeably pushed down the agenda at this year’s event itself, Oxfam again made newspaper headlines with its latest review of statistics on the growing gap between rich and poor – showing that 1% of people now own more wealth than the other 99% combined. Their new report titled “An economy for the 1%” revealed how the global inequality crisis has reached new extremes, with the wealth of the richest 62 people growing by 45% in the past five years. Meanwhile, the wealth of the bottom half has dropped by 38% in the same period.

Whether or not there was a previous in time in history when so few people controlled so much wealth, one thing is for sure: any so-called recovery from the global financial crisis in 2008 has been overwhelmingly captured by the “Davos Class”, and hardly shared by the world’s majority poor.

Historically, there have always been times when the world was highly unequal - although today's appalling levels of...

Posted by Share The World's Resources on Friday, 29 January 2016

According to Oxfam’s report, inequality is the result of “an economic system that is rigged to work in the interests of the powerful”, leading the anti-poverty charity to call on governments to commit to a number of common sense policies that can “end the economy for the 1%” and start building “a human economy that benefits everyone”. Above all, they call on world leaders to agree a global approach to end the era of tax havens. “This global system of tax avoidance is sucking the life out of welfare states in the rich world,” the report states. “It also denies poor countries the resources they need to tackle poverty, put children in school and prevent their citizens dying from easily curable diseases. … Far from trickling down, income and wealth are instead being sucked upwards at an alarming rate.”

Yet civil society demands for tax justice – meaning greater transparency, democratic oversight and redistribution of wealth in national and global tax systems – were delivered another blow following recent negotiations on corporate tax dodging at the European Union. The Anti-Tax Avoidance Package (ATAP) agreed by the European Commission at the end of January was widely denounced by progressive analysts, despite some previously high expectations. Far from making it harder for companies to dodge tax via tax havens, the Tax Justice Network reported that the new measures will do nothing to enhance the transparency or accountability of the EU’s tax rules. It may even add “fuel to the fire” by, in some cases, weakening member states’ own rules, or by the creation of major loopholes.

The EU has still to adopt the minimal measure of country-by-country reporting, which could help ensure that multinational corporations pay their fair share of taxes where they do business. The latest Google tax row in the UK has also further underlined how the British government lobby’s on behalf of major profit-making interests, and has no real concern whatsoever of ending the abuses of blacklisted tax havens.

#Google throws us some small change and Osborne calls it a victory against tax avoidance. Joke! Not #taxjustice

Who then can blame the residents of Crickhowell in the heart of Wales, where small local businesses have decided to use the same tax-dodging practices of the likes of Google, Amazon and Starbucks by moving their entire town offshore. They have now become the UK’s first Fair Tax Town, with a brilliant campaign to copy the tax dodging practices of the big corporate players. As they state on their video below: “Either we all pay tax, or none of us do. If it's optional for the multinational corporations, then it's only fair that it's optional for us small high street guys. If the government doesn't act now to close the loopholes, then we're going to use them too!”

Looking ahead towards 2016, there are of course many other areas of policy and activism where a call for sharing is central to political demands, especially in new economic activities on a more local or national level. Chief among these is the initiatives and practices that form part of the sharing economy, which is also becoming a hot topic of intellectual debate among academics and progressive thinkers. As another recent academic paper questions: is the sharing economy “a pathway to sustainability or a nightmarish form of neoliberal capitalism?” The answer of course depends on what you mean by economic sharing, which from STWR’s perspective is an explicitly political question in relation to the power structures and policies that maintain an unjust status quo.

We’ll soon publish a valuable contribution to this debate from STWR’s founder Mohammed Mesbahi, who has a unique and visionary take on what the sharing economy means in its most spiritual, universal and futuristic meaning. Of the Top 10 sharing economy predictions for 2016, we can only agree with Neal Gorenflo, founder of Shareables, that mounting social crises are bound to “elevate sharing and the commons as a systemic solution”. Another important development to look out for in the field of online sharing, as pointed out by commons theorist David Bollier, is platform cooperativism – which can be described as where the cooperative movement meets with 21st century technologies, or “an online economy based in democracy and solidarity”.

A separate but connected field of scholarly debate concerns the degrowth or post-growth movements, which are fast increasing in popularity as we transition towards more democratic, just and balanced modes of economic organisation. In many ways, the degrowth discourse – despite the issues it raises in terms of its negative framing – is one of the most important economic debates for students and activists, and one that is entirely predicated on the need for a fairer and more sustainable sharing of global resources.

All of the core proposals that are generally discussed within the movement – from a citizens debt audit and basic income to green tax reforms and setting environmental limits – in some way reflect the “new common sense of sharing” that must govern social and political relations in the new millennium. It also embraces the question of living more simply, which has monumental significance in relation to resolving the huge imbalances in consumption patterns across the world. To quote from a recent article in the New Internationalist by the prominent degrowth scholar Giorgos Kallis:

This is a question of social and environmental justice: a ‘shrink and redistribute’ from the global 1% (and to a lesser extent the 10%, which includes the middle classes of the EuroAmericas) to the rest. Such invocations of sober simplicity may resonate with dormant common senses about the ‘good life’ present in many cultures, East and West. It can recover the commonsensical critique of ‘excess’ from the grip of austerians, who hypocritically use it to justify their regressive policies.”

Along with the visions for fairness and equity in civil society campaigning on climate change, these debates on global degrowth encompass some of the foremost populist discussions on sharing the world’s resources. To be sure, the emphasis in these debates is on community-level alternatives or national policy proposals for governments, but there is nevertheless a vital focus on the question of a sustainable transition to a new international economic model. No doubt many of these big-picture issues will be discussed at the next International Conference on Degrowth, to be held in Budapest from 30th August to 2nd September this year.

There are many other ways of recognising and understanding the growing call for sharing, however implicitly it is expressed, especially in terms of worsening humanitarian crises across the world. What kind of sharing is there in a world where fears of terrorist attacks and mass refugee flows are driving many Western governments to roll back human rights protections? Where most governments (both North and South) are further cutting welfare spending, increasing fees and payments for healthcare systems, making the labour market more “flexible”, and further privatising public services and assets – all in a time of economic contraction and extreme wealth inequality? It seems that all the trend lines for social cohesion are going in the wrong direction, while the world is fast approaching an intensified period of economic turmoil, conflict and tension.

The case for sharing cannot anywhere be clearer than the ongoing refugee crisis, reportedly the largest humanitarian crisis since the second world war. The leading light of generosity shown by Germany and Sweden is now rapidly waning, and the prospect of a “fair and proportional share of refugees” among all European and other states is becoming a pipedream – let alone the viable prospect of legal entry and safe passage for the million-plus people fleeing war and persecution. Instead, EU governments are collectively spending billions on border controls, policing and razor wire fencing, while already scant international aid budgets are being diverted to domestic expenditures for dealing with asylum seekers.

Welcome to Europe.
Are you:
A multinational corporation > don't worry about tax etc
A refugee fleeing war > give us your valuables#Denmark

Interesting Denmark on top, given today's news that they don't want to share with #refugees https://t.co/rRfgvAdWeX

It appears hopeless to rely upon our government leaders to “bear witness to the full arc of the refugee crisis”, when there is no official acknowledgement of how – in Professor Noam Chomsky’s words – this “human catastrophe” is “in substantial part the result of Western crimes”. Yet despite the increasing disunity and lack of empathy or compassion being demonstrated among nation states, there is a “solidarity explosion” from ordinary citizens who are working tirelessly to help the refugees. As reported on Common Dreams:

“Europe's governments have largely failed the million refugees they've helped create - cue doors and wristbands of shame, theft, teargas and racist backlash - but its people often step up to declare "we are one, united humanity." Greek islanders have earned a shot at a Nobel by saving thousands; online wise guys have shredded Denmark's greed; Banksy has decried French violence; and Finnish clowns mocking racist patrols have taken to the streets to let "peace and love flow without borders."

There is much more to say about the economic, political and even spiritual significance of the refugee crisis that STWR will discuss in the period ahead, including the inner or psychological changes that are needed before we can truly let “peace and love flow without borders”.

The above survey is, as ever, but a brief snapshot of recent trends and developments that relate to the growing call for sharing, and there are numerous other causes and issues that are worthy of mention – such as the growing campaigns against TTIP and other free trade agreements, and the budding Democracy in Europe movement (DiEM25). We will continue to highlight these issues in blogs, articles and future editorials. For regular sharing-related news and information you can also visit STWR’s Twitter and Facebook pages, as well as our Scoop.it! page on “what we’re reading”. If you haven’t done so already, please sign up to our newsletter on the homepage if you’d like to receive periodic updates in your email inbox about what we’re up to at STWR.