Article 25 and a Universal Basic Income: the perfect match 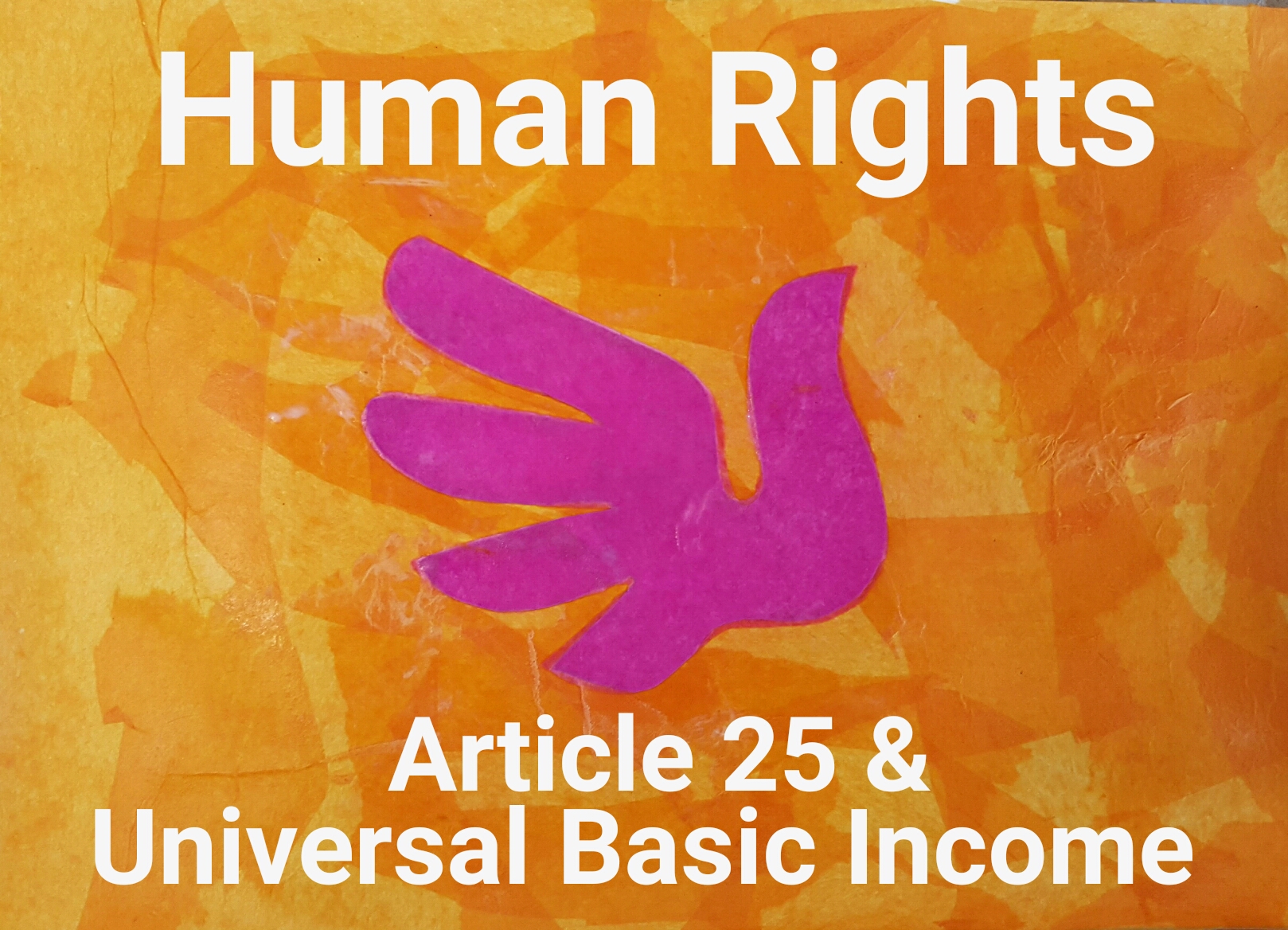 What is the answer to ending the suffering of the most marginalised people? Our only hope is a ceaseless demand for guaranteeing Article 25 of the Universal Declaration of Human Rights, which could eventually open the door to a global basic income for all, writes Sonja Scherndl.

Most of us are aware of the problems we are collectively facing: environmental issues, job losses or job insecurity, homelessness, increased violence, terrorism, an immigration and refugee crisis, overpopulation, poverty and famine.

What hardly anyone is talking about is that we are all connected, and as much as we may have separated ourselves by nationality, religion, cast, political parties etc., the fact remains that we are one humanity or, as some describe, “one human family”. The planet provides for all of us without making a distinction – food, water, air, oceans and land – our commons. Yet we have managed to privatize these essential resources for only one purpose: to make money and profit, thus determining who should have access and who should go without.

So complacent has humanity become over the last few decades that 18 million people are dying every year in a world of plenty. They have become the forgotten people as we have normalized their plight in our minds, often with the words “poverty has always existed, it’s nothing new”. Yet that poverty is steadily growing in many countries, with more famines in the developing world and increased homelessness and foodbanks across the West. We don’t hear much of those either, unless we ourselves are affected. Yet these deprivations are directly connected to increased violence, immigration, a degrading environment, homelessness and overpopulation.

So, what is the answer? Demanding Article 25 of the Universal Declaration of Human Rights and a Global Basic Income could be the solution we are looking for, as they go hand in hand.

On December 10. 1948 the General Assembly of the United Nations adopted and proclaimed the Universal Declaration of Human Rights, including Article 25 on the right to an adequate standard of living:

Everyone has the right to a standard of living adequate for the health and well-being of himself and of his family, including food, clothing, housing and medical care and necessary social services, and the right to security in the event of unemployment, sickness, disability, widowhood, old age or other lack of livelihood in circumstances beyond his control.

Motherhood and childhood are entitled to special care and assistance. All children, whether born in or out of wedlock, shall enjoy the same social protection.

Sadly, Article 25 has never been implemented globally through appropriate government interventions and redistributive measures, but if it were, it would finally end poverty and create hope for millions of people for the first time. An Unconditional Basic Income, a periodic cash payment delivered to all on an individual basis to cover basic needs, would also be essential, because it will help make it all possible. It will finally guarantee the universal realization of Article 25.

However, some free market thinkers argue for a fixed (basic income) amount per person in favor of scrapping all other social services, like unemployment benefits and housing benefits. Their argument is that it will save the government a lot of time and money in determining who qualifies for welfare and who does not. This might be an incentive for politicians, but at the same time it might worsen the situation of relatively disadvantaged, vulnerable or lower-income people. Basic Income Earth Network (BIEN), at last years General Assembly in Seoul, stated that it should not replace the compensatory welfare state, but rather complete and transform it into an emancipatory welfare system. Unconditional Basic Income Europe (UBIE) agrees with that statement, and both organizations advocate that there should be no means testing, but a guaranteed monthly or annual payment given to all.

In this way, a basic income is an emancipatory policy and will help us to strengthen democracy. The word 'democracy' originally comes from Ancient Greece and means 'power of the people'. Unfortunately, this type of democracy does not exist anywhere in the world, but to get closer to this ideal, everyone on the planet should have a minimum degree of economic freedom to be able to choose how they want to live their own lives. It is the hope for every human being, given the social transformations it will unleash by enabling all people to plan for a secure future.

Of course, for an Unconditional Basic Income to work for everyone, the different living conditions of people around the world need to be considered. Some people live in dire poverty, with no roof over their head and no idea where their next meal is coming from. A small monthly income might make life a bit easier, but it will not be enough to lift them out of poverty once and for all. There is a growing sense of a new consciousness or awareness that we cannot separate ourselves from the cries of our brothers and sisters, no matter where they are in the world. Unconditional Basic Income was originally discussed only on national levels, but has since expanded in view to a global level, to include the most marginalized people.

What should also be taken into account is that most countries outside Europe do not have a comprehensive welfare system in place. This is another reason why many economic migrants are seeking a livelihood in Western Europe, where they would have the right to free medical treatments, housing and other benefits. If they had these basic social services guaranteed at home, they may never leave. Also, many developing countries do not have an adequate tax system in place to offer a functioning welfare system. Even with overseas aid going to many of these countries, the money flowing out to the more affluent parts of the world is usually much greater than the original donations given.

If it is not large corporations that harm these countries through illicit activity and profit repatriation, then it is often corruption at the highest level. Nigeria for example has a tremendous wealth of oil and minerals. Here the government officials live like kings, yet their people are one of the poorest in the world, with millions now facing the prospect of famine. Let us also not forget the numerous tax havens that many big companies use, which is equivalent to any other form of corruption. In all cases, money and resources are effectively stolen from the people that are in most dire need.

The list of corruption and exploitation goes on, endlessly. For all of these reasons, we urgently need to demand the human rights of Article 25 for everyone in the world, which is the key that will open the door to a truly Global Basic Income. Firstly, we must ensure that everyone has their basic needs covered, which means adequate housing, food, medicines etc., and an Unconditional Basic Income will safeguard the rest.

Over time, the guaranteeing of Article 25 and a basic income will mean that the world population will eventually stabilize, and people will no longer need to immigrate on a mass scale. Even the environment may be less exploited when illicit practices like poaching and sales of rare timber become much less common, or stop completely, as this has often been the only means for some poor people or villages to make a livelihood.

If enough people demand the full realization of Article 25, there will also be a huge knock-on effect on the wars that are everywhere being waged, as government spending must first cover the needs of its people before it can further invest in armaments.

Furthermore, food speculation must stop, as instead all countries work together to finally distribute the food to where it is most needed. For too long has food been used as a commodity in the financial sector, where it is often left to rot in the store houses of the West to increase its market value.

Pharmaceuticals will also have to change their profit-orientated ways of doing business, if we want to guarantee free or cheap healthcare for all citizens of this world.

The founder of Share The World’s Resources, Mohammed Mesbahi, has described in a new book how these drastic changes in government priorities can be brought about. In ‘Heralding Article 25: A people’s strategy for world transformation’, he writes that if we are waiting for our governments to do the job for us, we will be waiting in vain, while most social and environmental trends are worsening. Our only hope is to join together with millions of ordinary people in huge, continuous protests on a worldwide scale to demand from our governments the immediate implementation of Article 25, with the United Nations as the governing body to oversee the organizational logistics.

For many people, such a plan of action may sound far too simple and even naïve, considering the complexity of political issues today. Yet there is nothing complicated about the fact that there is more food in the world than is needed, and yet people are dying of hunger. Governments all over the world are not serving their people, but instead they facilitate the profit interests of multinational corporations, which in turn exploit us. The only way to reverse this systemic injustice is through the people of the world uniting under the banner of Article 25. Not against capitalism or ‘the system’, which has also led us nowhere in the past, but through a simple demand for everyone’s right to a dignified life.

Of itself, an Unconditional Basic Income will not be sufficient to achieve an end to poverty. The hollow promise of economic growth and more jobs will also never work. The one ingredient that will make it possible is countless numbers of people rising up in peaceful protest with an engaged heart, and not just the intellect, for anything else will be short lived.

There are many groups that are doing tremendous good work for people and planet, and that should and must continue. But if we could unite even once a week and raise our voices for governments to implement Article 25 and a Global Basic Income, then we might start seeing some real changes.