A full list of STWR's publications as well as related news, articles and blogs can be found below. You can filter the content using the 'category' or 'topics' links in the menu on the left.

The age of sharing

As we celebrate National Sharing Day, let’s make sure we advocate for sharing in all its forms. The true milestone for the Age of Sharing will be the creation of a global sharing economy that ensures we end poverty and live sustainably. 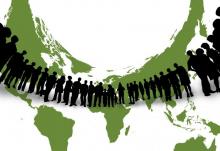 Politically-filtered views on progress against poverty

The policy interpretations given by some critics of the World Bank's global poverty data are yet another form of their own political filtering. Some people just don't want to accept that the living standards of the poorest could evolve over time in any way contrary to what their political beliefs would appear to dictate, argues Martin Ravallion.

Should we celebrate a decline in global poverty?

The World Bank's latest data suggests a decline in global poverty throughout every region of the developing world, as well as the fulfillment of the Millennium Development Goal on halving poverty well ahead of schedule. But is this really the 'good news' that we are led to believe?

Share The World’s Resources convened a book launch and panel discussion on slum growth and urban poverty in the Global South, held on Wednesday 24 February at the Amnesty International UK headquarters in London.