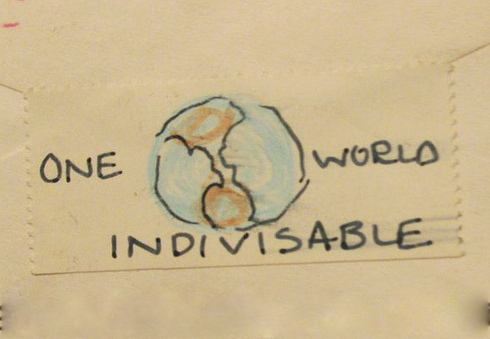 We live in a globalised world where the crises we face, from wealth disparities to climate change and resource wars, affect all nations to a greater or lesser extent.

Systems of worldwide communication, trade and finance mean that people in different countries live highly interconnected and interdependent lives, yet the benefits of economic activity remain extremely skewed in favour of high-income countries. Given this reality and the enormous discrepancies that exist in levels of affluence between rich and poor nations, any process of economic sharing cannot be limited to a solely national context and must be actively applied on a planetary scale.

On the national level, an effective process of economic sharing can help governments to realise their long-standing commitment to protect socio-economic rights by ensuring that all people have access to essential goods and services. A majority of UN member states have already adopted a number of legally binding human rights instruments that embody these commitments, including the International Covenant on Economic, Social and Cultural Rights.

On the international stage, however, there is a huge disparity between those rights enjoyed in the richest countries – such as the right to food, the right to adequate housing or the right to an education – and the daily infringement of these basic rights for millions of men, women and children in less developed countries. This reality points to the need for governments to finally recognise their extraterritorial human rights obligations by sharing resources more equitably on a global as well as a national basis.

In a climate and resource constrained world, a process of global economic sharing can also play a major role in addressing environmental crises and reducing interstate conflict over vital resource interests. As many environmentalists propose, ensuring that all nations can access resources equitably without transgressing ecological thresholds will require a ‘fair shares’ approach to managing the global commons. In the longer term, sharing finite resources more equitably and sustainably will necessitate a new global governance framework that will have immense implications for the way we extract, distribute and consume the Earth’s produce.

The emergence of global sharing

History provides some important examples of the recognition that humanity must work cooperatively as an international community in line with the principle of sharing. The establishment of the United Nations after the Second World War was one of the first major expressions of sharing in political and global terms, as it facilitates international cooperation on a wide range of issues including peace and security, economic development, social progress and human rights.

Not long after the UN was created, a major exercise in cross-border economic sharing was kick-started by the United States government, which embarked on a massive transfer of financial resources to a number of European countries that had been devastated by war. Although historians debate how altruistic the ‘Marshall Plan’ was, it demonstrated the great potential of international resource sharing that has inspired many proposals for a ‘global Marshall Plan’ today, mainly in the form of a massive relief effort for developing nations.

A more contemporary example of global economic sharing is Official Development Assistance (ODA) that OECD countries have been providing to developing nations since the 1960s, although foreign aid comes with so many associated problems that it cannot be considered a true or effective form of economic sharing on an international level. A further example is the important precedent in international law known as the Common Heritage of Mankind, which enables certain cultural and natural resources to be recognised as ‘shared commons’ that should be protected from exploitation by individual nation states or corporations, and held in trust for the benefit of future generations.

Despite these notable exceptions, the fact of our global unity is not sufficiently expressed in our international economic and political structures. Rather than scaling up and strengthening diverse forms of global economic sharing, the world’s ‘operating system’ is still based on the competitive geopolitical interests of the most powerful and wealthy nations. At the same time, the main institutions that set the rules for international trade and finance - the World Bank, International Monetary Fund and World Trade Organisation - are all widely criticised for being undemocratic and furthering the interests of large corporations and rich countries.

A more inclusive international framework urgently needs to be established through the United Nations and its relevant agencies. The UN is the only multilateral and fully representative global institution in existence with the necessary mandate and capacity to coordinate the process of restructuring the world economy, despite being in need of significant reform and democratisation (particularly by abolishing the Security Council with its arbitrary power of veto, and renewing the UN’s independence as a forum for economic policy-making).

After more than 60 years, the UN Charter and Universal Declaration of Human Rights still embody some of the highest ideals expressed by humanity. If the UN is fundamentally renewed and entrusted with more authority, it could be in a position to foster the growing sense of community between nations and facilitate economic sharing on a global scale.

Report: Financing the global sharing economy
A report by Share The World’s Resources demonstrates how governments could mobilise over $2.8 trillion each year to bolster the global sharing economy and...
Blog: Imagining the ultimate global sharing day
The growing support for the sharing economy has the potential to change the way we understand and address the many challenges we face. But it is at the...
Blog: Expanding the debate on global sharing
The age-old concept of sharing is increasingly being discussed in relation to political and economic issues, even though a public discussion on the...
Report: The United Nations and the principle of sharing
This report presents an analysis of the effectiveness of the United Nations and outlines measures which can significantly reform the body to ensure that...
Article: Extreme wealth vs global sharing
Campaigners have long proposed measures to reduce extreme inequality, but policymakers remain fixated on an economic model that threatens to undermine the...
Printer-friendly version