India just had the biggest protest in world history - will it make a difference? 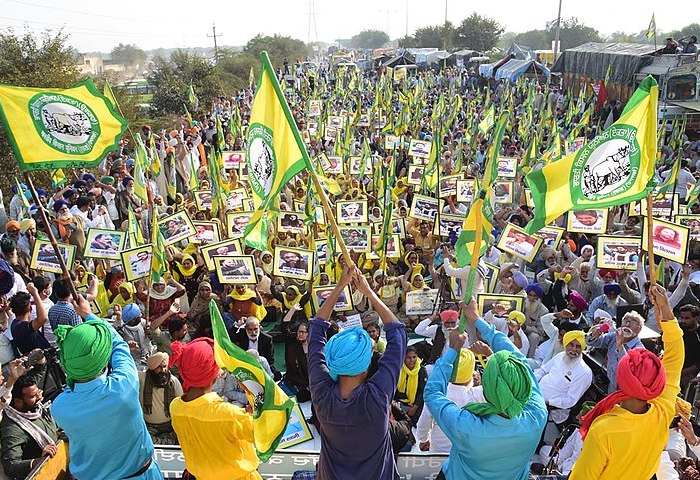 In late November, what may have been the single largest protest in human history took place in India, as tens of thousands of farmers marched to the capital to protest proposed new legislation and upward of 250 million people around the subcontinent participated in a 24-hour general strike in solidarity.

This massive people’s movement has gained attention worldwide and, moreover, forced the government to come meet the protesters where they are instead of just cracking down and brutalizing them, a first in the six years of Prime Minister Narendra Modi’s rule.

To comprehend this moment, you have to understand the long plight of India’s farmers. To a much greater degree than other major economies, India retains its mass agrarian traditions alongside its developed industrial and tech sectors—agriculture is still the largest source of livelihood for most Indians, employing more than half the subcontinent’s workforce, mostly in small and local farms instead of agribusiness behemoths.

Yet the farmers themselves, despite feeding so much of the nation and providing a significant bedrock for India’s economy, have always had a brutal time of it. Colonial-induced famines (temporarily solved by the reforms of the 1960s “Green Revolution,” which later would cause its own issues), bureaucratic and oppressive government policy, exploitation by feudal-minded landholders, and, of course, climate change have continually left India’s land workers among the worst off the world over.

Even before the acceleration in mass despair augured by the pandemic and ensuing locust invasion, farmers had been left completely strapped by crippling debts, losses on marketed goods, and devastation from extreme weather; long-troubling suicide rates reached staggering new heights. Those who say India has “too many farmers,” as a writer at Indian business publication Mint and a fellow at the conservative American Enterprise Institute have claimed, are completely missing the point: The country has bled so many other jobs involving so-called unskilled labor, especially lately, that many of the country’s poorest, illiterate, and otherwise disenfranchised have no other labor recourse, especially with no workable safety net on hand.

So, after the government took action that seemed to depress farmers’ welfare even further, land workers weren’t going to take it anymore.

In September, Modi rammed three pieces of legislation through Parliament that supposedly serve to remove taxes and other government-imposed financial burdens on farmers to help them directly sell to corporations and encourage private investment in agriculture, following Modi and his ruling Bharatiya Janata Party’s deregulatory agenda. It sounds fine when you describe it so pithily: get rid of the red tape and give farmers free access to bigger markets.

But it’s not so simple. The supposedly onerous business barriers the laws remove help provide farmers a guaranteed, timely sale and distribution market for their goods, stop businesses from hoarding produce, keep prices at a fair level, and prevent small farmers from being taken advantage of by agribusiness corporations.

Modi’s new laws nominally give farmers a better deal by allowing them to directly sell more produce to more places. What they really do is take away the remaining meager support granted to farmers already deprived of much of the support they need and allow them to be exploited by big agribusiness firms and corporations. With these protections—including guaranteed government-based marketplaces and frameworks to establish minimum prices for goods—cast off, there is little left to stop Big Ag companies within India from swallowing market share.

The Indian government’s shift toward deregulation and privatization since the 1990s has hit farmers hardest, leaving them without the top-down protections that allowed them to not only manage and preserve their farms but also make sure their goods could actually be sold in a manner that provided subsistence and profit. As a result, more laws tailored to free markets were never going to exactly make land workers happy. “We will lose our lands, we will lose our income, if you let big business decide prices and buy crops. We don’t trust big business.

"Free markets work in countries with less corruption and more regulation. It can’t work for us here,” one farmer told the BBC last week. And with the country now entering a steep recession for the first time in decades and providing no welfare in turn, enough was enough.

Protests had started forming as far back as August, when awareness of the legislation was becoming more widespread but the bills themselves had not been passed yet. They ramped up soon after passage, with farm unions and other trade unions banding together—primarily in the agriculture-heavy states of Punjab and Haryana but also steadily growing elsewhere—to call for Bharat bandh (a Hindi term calling for a general strike that quite literally means “shut down India”). An actual shutdown did hit the railway, halting trains to and from Punjab through October before the campaign relented following concerns about needed supplies. The farmers and unions then decided to take it straight to the capital.

On Nov. 25, when the marchers reached Delhi, they were met right at the city limits by police, who used tear gas and water cannons against the protesters, and obstructed and damaged the roads outside the city to prevent them from entering. Photos and videos soon went viral on social media of the brutal policing tactics and crackdowns, eliciting worldwide sympathy for the rallygoers. It didn’t pass worldwide notice that some of these farmers kept on, even feeding some of the very officers who beat them.

Modi, in his attempt to quietly ease things for agribusiness corporations in the middle of his oppressive pandemic regime, inadvertently sparked the single largest proletariat uprising in world history. And these farmers are pressuring the Modi administration in a way past protesters simply could not. Last week, government officials started meeting with farm union leaders, and they also granted the marchers a designated area of Delhi within which to carry on the protest (although this mandated location is far from the Parliament House). However, many protesters wished to remain at the city border, having brought ample equipment to set up camps along the boundaries wherein the demonstrators can prepare food and organize.

The farmers are demanding nothing less than a full retraction of the laws and say they are willing to remain at the capital’s outskirts until this is done. They also are asking Parliament for other special demands and regulations to keep small farms competitive in the marketplace, according to India Today. The newsmagazine also mentions that “the central government has agreed to work on most of the demands and make them part of the rules—which will need Parliament’s approval—except that of making purchases on [minimum support price] rates mandatory.”

Without this last measure, talks with the government have continually stalled and restarted, reaching a deadlock. And on Monday, Union Agriculture Minister Narendra Singh Tomar made a show of meeting with a small group of farmers who were mostly BJP supportersin favor of the new law, ignoring the masses outside who were very staunchly opposed to it.

The BJP is now starting to take more drastic, desperate crackdown measures. The New York Times reported on Tuesday that leaders of opposition parties in Punjab, Haryana, and Uttar Pradesh who have supported the farmers’ protest, including Chief Minister of Delhi Arvind Kejriwal, had been barricaded in their homes by police, reportedly under the government’s direction. (Police soon relented in Kejriwal’s case after further protests.)

The awe-inspiring demonstration has become the defining story of India’s current era. News sites based in the country, like the Quint and the Economic Times, have entire sections dedicated for live updates on the protests. WWE wrestlers of Indian origin have expressed support for the farmers on Instagram. Even Canadian Prime Minister Justin Trudeau weighed in, in a statement of support for the protesters and concern about the force being used that met with blowback from the Indian government, which personally told Canadian diplomats in India not to have their country interfere.

Until very recently, the worldwide rally against U.S. President George W. Bush’s decision to invade Iraq in 2003 had been known as the largest in world history, amassing 10 million to 15 million people in more than 600 cities across the globe. This summer’s anti–police brutality protests within the U.S.—which also spread internationally—featured the participation of up to 26 million people in the country alone. So even if the 250 million figure is difficult to pin down with certainty, the Indian farmers’ protests still clearly dwarf these numbers by several degrees.

That is, of course, no guarantee of success. After all, this is the same government that crushed dissidents in Kashmir and demonstrators against the Citizenship Amendment Act with relative ease. But that doesn’t mean the farmers shouldn’t keep fighting.

Report: Land inequality is worse than we thought and rising in most countries
Land inequality is directly threatening 1.4 billion of the world’s poorest people, according to a recent report.
Article: Food security & agriculture: an overview
The escalating crisis of volatile food prices and food insecurity is the result of an industrial development model based on large-scale, export-orientated...
Blog: Flawed global rules in agriculture: Need for a new approach
Sophia Murphy, from the Institute for Agriculture and Trade Policy (IATP) speaks with The Real News on how for the past 20 years, the World Trade...
Blog: "Replacing hunger with malnutrition": Former UN official calls out African Green Revolution
The Alliance for a Green Revolution in Africa is repeating the failed policies of the past and risks pushing back further the struggle against hunger and...
Printer-friendly version