Making the case for sharing: the global alliance to #FightInequality 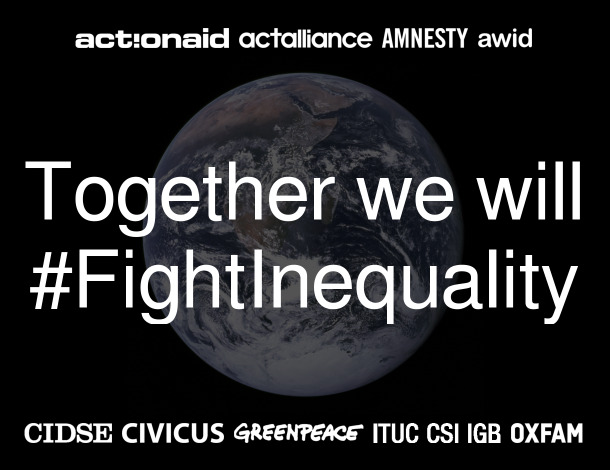 As an unprecedented alliance of campaign organisations combine their efforts in calling on governments to tackle the root causes of inequality, a new opportunity arises to instigate a much needed public debate on why future policy decisions should be guided by the principle of sharing.

Arguably, one of the most pressing challenges facing humanity today is the need to reverse ever-widening inequalities, especially as this injustice is now a central theme across a wide range of social, economic and environmental issues – from securing basic human rights to addressing the climate crisis. Equally as challenging is the need to mobilise sufficient public support to oppose the neoliberal polices that cause inequality and demand that governments share wealth and other resources more equally across society and the world as a whole.

It’s therefore promising to see an ‘inequality alliance’ of influential civil society organisations emerge this year just as the super-rich Davos cabal assembled once again for their exclusive mountain retreat. Notably, the organisations that form the new alliance are a heterogeneous group that normally pursue different agendas, which suggests that this is a potentially significant collaboration that could pave the way for similar cross-sectoral coalitions in the future, and engage a much larger and more diverse group of supporters. As well as the usual development NGOs like Oxfam and Action aid, the group includes Amnesty International, Greenpeace, the women’s rights group AWID, as well as a number of sizable network organisations such as the International Trade Union Confederation, CIVICUS and CIDSE.

In a  joint statement released in January, the alliance outlines the various ways inequality expresses itself and highlights how this crisis adversely impacts a majority of the world’s population:

“Workers across the world are seeing their wages and conditions eroded as inequality increases. The rights of women are systematically worse in situations of greater economic inequality. The vast majority of the world’s richest people are men; those in the most precarious and poorly paid work are women. Young people are facing a crisis of unemployment. Other groups such as migrants, ethnic minorities, LGBTQI people, people with disability and indigenous people continue to be pushed to the margins, suffering systematic discrimination.

The struggle to realise the human rights of the majority are continually undercut in the face of such disparities of wealth and power. Extreme inequality is also frequently linked to rising restrictions on civic space and democratic rights as political and economic elites collude to protect their interests. The right to peaceful protest and the ability of citizens to challenge the prevailing economic discourse is being curtailed almost everywhere, for elites know that extreme inequality and participatory democracy cannot co-exist for long.”

Drawing attention to the direct relationship between inequality and the ecological “future of our planet”, the statement also refers to recent research which demonstrates that someone from the richest 1% of the global population consumes 175 times as much carbon as someone as the poorest 10%. As many campaign organisations recognise, this stark illustration of the extent to which governments are failing to share the planet’s finite resources fairly (including the remaining global carbon budget) has major implications for the radical reforms needed to establish an environmentally sustainable global economy in the 21st century.

A common agenda to #FightInequality

The joint statement also makes the crucial point that the crisis of inequality is not an incidental aberration, but a systemic problem that is entirely the consequence of political choices and an overreliance on market forces. The alliance rightly acknowledges that this is “the result of our leaders listening to the 1% instead of the majority”, which explains why today’s socio-economic policy decisions mainly serve the interests of a privileged minority at the expense of the global common good. Reflecting the need to challenge vested interests more effectively, a substantial section of the coalition’s statement reads as an affirmation of their commitment to combine efforts, and they list a series of measures that they intend to pursue together:

“We will press governments to meet their obligations to ensure people can enjoy their rights to health, education and other essential public services through tackling tax dodging and ensuring progressive tax and spend policies. We will support workers’ rights to freedom of association and collective bargaining, and narrow the gap between rich and poor. We will fight for the redistribution of women’s unequal share of unpaid care work, and the tackling of violence against women brought on by state repression and rising fundamentalism. We will advocate for universal social protection floors. We will fight for land reform.

We will work together to challenge the disproportionate power and practices of the corporate sector that is undermining so many struggles, contributing to human rights violations and increasing inequality across the globe. We will work together with others to secure climate justice. We will take on the power of corporations, including fossil fuel companies who are undermining efforts which respond to science and protect people and planet. We will together champion international cooperation so every country plays its part and we avoid a race to the bottom.”

This statement of intent may not be a complete list of actions needed to tackle inequality, but it is clearly an important attempt among disparate campaign organisations to define common ground and pave the way for advocacy initiatives that could bring together concerned citizens in larger numbers and innovative ways. Moreover, there is an explicit acknowledgement that establishing a more sustainable and equitable economic system requires fundamental change on a “scale never seen before”, and a collaborative approach from people across the world including “governments, trade unions, civil society and companies who share a commitment to the common good.”

Here the alliance touches on a central issue for activists that echoes a core theme explored in publications by Share The World’s Resources (STWR): that radical change on a global scale –however essential and increasingly urgent – will be impossible to achieve unless many millions more ordinary people call on governments to reorder their distorted priorities. The policy reforms needed to fight inequality are well known to progressives, but as STWR’s Mohammed Mesbahi reasons in an upcoming book, any campaign for system change will never succeed “unless the people of the world gather in their millions on the streets in peaceful protest, and together embrace that vision and work for its fulfilment.”

As yet, however, there is no indication of how the new inequality alliance will gather the support and momentum needed to achieve their stated objective of tackling the systemic causes of inequality. There has been little mention of the #FightInequality hashtag on Twitter since the coalition first released their statement, and it’s unclear whether we will witness the emergence of new campaign initiatives, innovative direct actions, radical public policy proposals, or a new peoples’ movement to end inequality in the coming months.

Whichever combination of strategies the alliance members pursue, let’s hope that they are also able to shift away from their outmoded tactic of ‘fighting against inequality’ and embrace a more positive frame that promotes and advocates for sharing, as this constitutes a solutions-based approach that goes beyond simply analysing, critiquing and opposing the problems of the world. STWR has set out a simple case for taking this approach in their report Sharing as our common cause, which also highlights how the call for sharing is being expressed across diverse movements for social justice, environmental stewardship, global peace and participative democracy:

“As more and more people begin to raise their voices for governments to put human needs and ecological preservation before corporate greed and profit, the call for sharing is consistently at the heart of civil society demands for a better world … a call for sharing holds the potential to engage a much broader swathe of the public in campaign initiatives and popular movements that aim towards systemic transformation.

Many people feel disconnected from political issues owing to their technical complexity, or else they feel overwhelmed by the enormity of the challenges that face us and ill equipped to take action. But everyone understands the human value of sharing, and by upholding this universal principle in a political context we can point the way towards an entirely new approach to economics – one that is integrally based on a fair and sustainable distribution of resources.”

In other words, there is every possibility that the alliance could attract far higher levels of public support if their campaign (and any agenda for reform they formulate) incorporates the emerging call for sharing – especially since sharing wealth, power and resources more equally is undoubtedly the most effective route to reversing burgeoning inequalities and creating a more sustainable future. At the very least, this more positive and inclusive framing has the potential to instigate a much needed public debate on why policy decisions taken at the local, national and global level should be explicitly guided by the principle of sharing.

Report: Sharing as our common cause
This report demonstrates how a call for sharing underpins many existing initiatives for social justice, environmental stewardship, true democracy and...
Page: Sign the global call for sharing
If you agree with the need to catalyse a global movement of citizens that embrace sharing as a common cause, please sign and promote STWR’s 'global call...
Report: Beyond the Sustainable Development Goals: Uncovering the truth about global poverty
The Sustainable Development Goals – despite their positive and progressive rhetoric – by no means constitute a transformative agenda for meeting the basic...
Report: Heralding Article 25: A people's strategy for world transformation
After so many years of political inaction only the massed goodwill of ordinary people can bring about an end to poverty in a world of plenty through...
Printer-friendly version